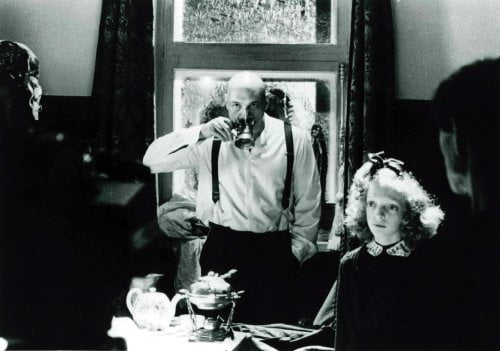 It is 1953 Russia and Joseph Stalin has become convinced that there is a “doctors’ plot,” made up with primarily Jewish medicos, of assassination of the dictator’s top and closest officials. General Doctor Klensky is one such suspect, but events about to transpire may save his life, if not his career, in “Khrustalyov, My Car!”

In February, 1953, General Yura Klensky (Yuri Tsurilo, "Silent Souls"), a military doctor, lives in cramped quarters with his extended family trying to evade Stalin's latest roundup of Jewish doctors accused of being assassins. When they do get him, he finds his expertise in longevity is being called into action by the dictator's own medic even though the leader is dead in "Khrustalyov, My Car!" Cowriter (with Svetlana Karmalita)/director Aleksei German, very loosely adapting Joseph Brodsky's story "In a Room and a Half," gives us an almost incomprehensible freak show in order to let his audience experience first hand the insane asylum he equates with life in Stalinist Russia. This is a film for only the most ardent of cineastes or Students of Russian culture, which, here, German makes appear completely foreign. And yet, those who give "Khrustalyov, My Car!" their time will be rewarded with a uniquely dizzying experience, expertly photographed by Vladimir Ilin whose use of the tracking shot is often breathtaking. In fact, Ilin's opening shot is a stunner as we see Yura ride his sidecar rig down a snowy Moscow street as his son, our narrator, talks about the Persian lilacs which used to grow there. A stoker is arrested on the streets and the narrator identifies himself as a young boy (shades of "Ivan Lapshin") inside his house before spitting in the mirror. Spitting, eating and excrement are constants here. Yura's overflowing family is a cacaphonous, crazy bunch - when his wife (Nina Ruslanova) tells him she will go crazy, one wonders how she's hung onto her sanity until now. She will be the first to suggest Yura is dying, noting the irony of a man with his speciality departing this world in his fifties. Later, Yura visits a lover, a middle aged Russian Literature professor professing to be a 'maid' who is anxious to have his child because, she, too, says he is unwell. Their lovemaking plays like slapstick. Yura makes hospital rounds and the situation is just as looney as home - we're greeted by a man in a lab coat asking if anyone needs cats - before Yura checks the 'enema room' and appears to find his twin (later, when Yura is led to Stalin's bedside, he will discover the man lying in soiled undergarments and a fight will break out with the nurse who insists she left him clean). If German's "My Friend, Ivan Lapshin" recalled Italian neo-realism and early Fellini, this one is often Felliniesque. It's challenging, but never boring. Some scenes, like the behind-the-wheel point of view car crash on a snowy street, or the film's ending, in which Yura balances a glass of wine on top of his head while riding an open train car, will have long-term housing in the memory, as will the film's irreverent final line. (The film's title comes from what Stalin's personal physician said when the man was declared dead.)

Yes, “Khrustalyov, My Car!” is centered on Stalin’s doctors’ plot and the drama of Stalinist politics at its worst. But, there is a lot more going on in this film that covers a number of genres from slapstick comedy, mystery thriller, and historical drama to surrealistic impressionism. Think Frank Capra’s screwball comedy, “You Can’t Take It with You,” crossed with the surrealism of Federico Fellini films like “Satyricon” and “81/2” and put the combination on steroids and that approximates what is “Khrustalyov, Mu Car!” It would be the rare person, indeed, who can sit through this 21/2 hour Alexei German opus and be able to tell me what it is about. German does so many things with his history-based tale that it is more a case of letting the visual sights (gorgeously photographed by Vladimir Ilin) and psychological concepts wash over you than trying to figure out the intricacies of the surrealistic story. I realized this after the film’s first hour. Yuriy Tsurilo is a powerhouse as the boisterous, larger than life General Dr. Klensky with his hairless bullet head, gigantic mustache and impressive bulk (both vertical and horizontal). Despite the distinct possibility that he faces arrest and death, Klensky has a joie de vie that is unstoppable. For the historically minded, German tells his version of Stalin’s final days and delves into the politics around the doctors’ plot that never was. Watching Alexei German films is akin to watching those by Hungarian auteur Bella Tarr – you may not be able to figure out the story but it sure is interesting to watch from the visual viewpoint.