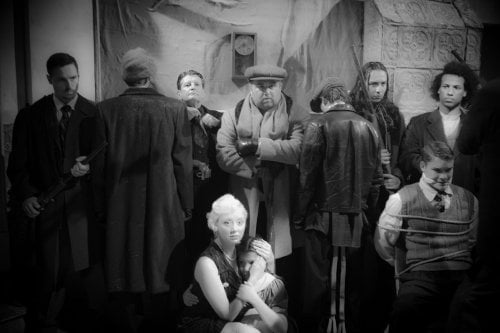 Gangster Ulysses Pick (Jason Patric, "My Sister's Keeper") hasn't been a good husband or father, so when he leads his gang to his home under police fire, his right hand, Big Ed (Daniel Enright), wonders why he'd box them in there. Ulysses, who is carrying a drowned girl, Denny (Brooke Palsson), and a kidnap victim he doesn't recognize as his own son, Manners (David Wontner), needs to make a journey to the top of his thoroughly haunted house. There his wife Hyacinth (Isabella Rossellini) remains shut in in their bedroom forcing Ulysses to communicate through the "Keyhole."

Working with George Toles, his cowriter since 1991's "Archangel," director Guy Maddin has made a biography of a house loosely based on Homer's Odyssey and 1930's gangster spook movies that plays like his own "Lost Highway" by way of "Eraserhead." Lynchian touches abound, from the presence of Rossellini (who, yes, starred for Maddin before as well) to a satyr-like old man drawing open a theatrical curtain to talk of boy scout knives and wolverines named Christy, yet it is still unmistakably Maddin's work. The film is creepy, depraved and often funny and Maddin's most perverse outing since "Tales from the Gimli Hospital," but although it compels through most of its running time, it doesn't quite sustain through the home stretch. 'Everyone who's dead face the wall, everyone who's alive look at me' says Big Ed to the motley group before him and, like those in the corner of the Blair Witch's cellar, two oblige. But that, we soon come to realize, doesn't mean the rest walk among the living either. When Ulysses arrives, he demands Rochelle (Olivia Rameau), who only speaks French, hand over her dress for the salt water logged Denny, who cannot see or hear her own thoughts but can divine those of others. She's Ulysses's guide through a house filled with nooks, crannies and the reverberations of the past. As with all Maddin films, this one's in black and white and although it's his first digitally shot, the look is distinctly still that of a silent, one where lights revolve around a room and nightmare images often overlay the action. These ghosts have a highly sexual nature, from Calypso (Louis Negin, "54," "My Winnipeg"), Hyacinth's father manacled to her bridal bed ('no one knows how long the chain is,' he informs us) whose penis is omnipresent (it juts from a wall, Cocteau's "Beauty and the Beast" style at one point), to Ulysses's son Bruce (Reegan McCheyne) found furiously masturbating under the stairs ('Double Yahtzee!') to Ogilbe's (Kids in the Hall'er Kevin McDonald) crossing to the unseen to forever mount the backside of a maid scrubbing a hallway floor. Ulysses repeatedly asks Hyacinth, who is being wooed in her bedroom by his rival Chang (Johnny Chang), 'Can I come in?' only to be told she'll pretend he is not there. Turns out Ulysses is a ghost too, but 'a ghost isn't nothing.' Dr. Lemke (Udo Kier, "Melancholia"), who was unable to save his own son that very night (Kier's retelling of how his fear of wasps cost his son his life paints eerie pictures before our eyes), comes to aid Denny, the girl Manners loves, but everyone in this house is doomed, except perhaps Manners himself, the only living Pick sibling of the original four and one of three generations that cradle themselves in Hyacinth's lap. Maddin's films frequently have a dreamlike quality about them, the very essence of cinema itself, but "Keyhole" is splintered like a broken mirror, its story strands of family secrets, buried bodies (at sea!) and betrayals elusive, the only reality belonging to the house itself. Jason Staczek's ("Brand Upon the Brain!") score is an avant garde take on the horror genre, but Maddin augments it with the sounds of the house itself, the creaking stairs, squeaking doors and sighs of settlement. Art direction oddities abound from the homemade electric chair, stuffed and carved bears and flower pots bearing skulls. This is Maddin's starriest cast to date, but although Patric has the look of a screen idol of yore, his comic observations become more and more modern with his ironically pat delivery, yanking one out of Maddin's world. Eventually, Maddin himself just wears you down with his refusal to adhere to a more robust internal logic. "Keyhole" is not a film for those looking for a traditional narrative. Those willing to let themselves be swept into a lunatic's reality swaddled in cinematic eeriness and twisted humor will find themselves on a compelling if meandering journey.