Keep an Eye Out (Au poste!) 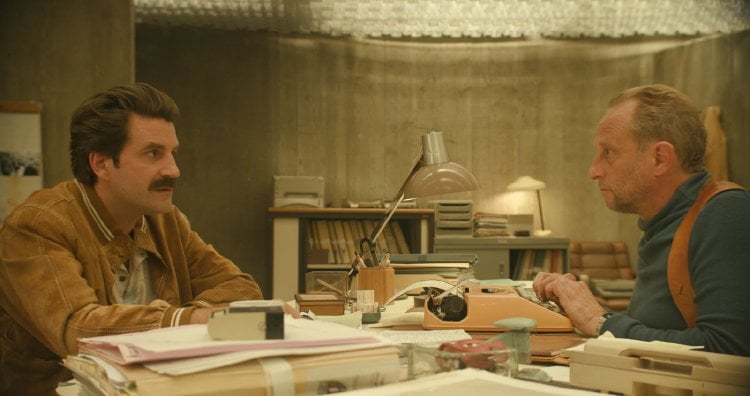 After calling 911 to report a dead body outside his apartment building, Louis Fugain (Grégoire Ludig, "Romantics Anonymous") becomes the primary suspect, brought in for questioning by Chief Inspector Buron (Benoît Poelvoorde, "The Brand New Testament")  who makes it quite clear they will be in the police station which is slowly being deserted all night.  When Buron is called away to talk to his son, he instructs his one eyed colleague Philippe (Marc Fraize, "Godard Mon Amour") to “Keep an Eye Out.”

Writer/director Quentin Dupieux ("Rubber") is a master of absurdist humor and in this, made before his Jean Dujardin starring “Deerskin,” he flexes his language muscles in a meta comedy which finds its protagonists tumbling down semantic rabbit holes when witnesses and the inspector aren’t visiting Fugain’s flashbacks.  There are plenty of sight gags too, as should be the case in a film that literally tells you to be on the lookout.

Take, for example, Buron’s continual calling for Philippe when the man, whose back is turned, is obviously wearing earphones.  Exasperated, Buron finally throws something, hitting Philippe’s back.  When the man turns around, we see he only has one eye.  This set-up is so ingenious, I don’t even know if there’s a name for it other than a Dupieuxism.  Once Bruno leaves the room, mundane conversation is paired with escalating insanity of the highest order which will continue to pay off throughout the film.

While Bruno blows smoke from his lung hole (!), he two-finger types Fugain’s deposition explaining just how his neighbor saw him seven times between the hours of midnight and 5 a.m.  The absurd stories which follow are accompanied by flashbacks where Fugain is visited both by Philippe’s wife Fiona (Anaïs Demoustier, "The New Girlfriend"), who ‘remembers’ him from a meeting that hasn’t happened yet, to Bruno himself.  Throughout both the present and the past, hunger games are afoot, Fugain complaining about needing to eat from the get-go (he’ll be rewarded with a preciously packaged take-out oyster), Buron’s son Sylvain (Orelsan) delivering dinner in the form of a hot dog he takes out of his pocket.