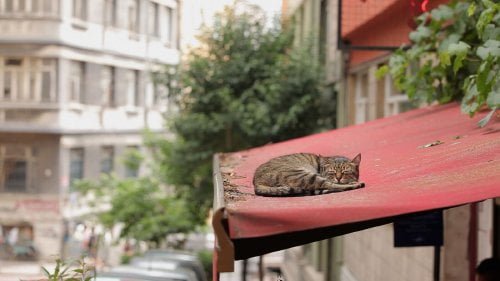 Hundreds of thousands of cats roam freely around the streets of Istanbul, mooching food, being adored (sometimes not) and doing what cats do. The documentary team led by Ceydra Torun follows seven of these feline denizens during their days and nights in “Kedi.”

Cats have been roaming the streets of Istanbul for thousands of years. Numbering in the hundreds of thousands, they have no master, but despite the indifference of some, they are cared for and are considered a symbol of the city. Director Ceyda Torun, armed with drones and cat cameras, celebrates her home city's relationship with "Kedi." As a cat owner, I was expecting to be enthralled with a documentary that follows seven different cats around Istanbul neighborhoods. What I wasn't expecting is how heartening Torun's work would be. In today's troubled world where venality, greed and oppression appear to rule, there is hope to be found watching grown men tenderly care for the cats who have adopted them and kittens who've been abandoned. This remarkable film works on two levels, as Torun provides an insider's look at Istanbul's vibrant neighborhoods while following her cats. At Galata Tower, Sari hustles amongst shops and cafes for food for herself and her kittens. Her favored shopkeeper describes her with affectionate irritation, calling Sari a 'solid character.' In an industrial area, a middle-aged workman tells how Bengü was the scrawniest and ugliest of four kittens. The other three left, but she stayed. 'When you pat her, she almost passes out,' he tells us, brushing her daily and worrying when she doesn't appear in the morning. A black and white hunter at the fish market frustrates fishmongers with his passion for bluefish, but is respected for his mousing skill. In Samatya, there's a female known as Psychocat. Her base is a tea house, but she makes her rounds, ferociously guarding her territory and her cowed mate. In one of the city's toniest neighborhoods, a gentlemanly cat refuses to beg at a deli, instead tapping its paw on the glass window (he's rewarded with Emmental and smoked turkey). Cats are everywhere - sleeping curled up on cafe chairs and on the tops of shop awnings, leering from buildings like gargoyles, darting in and out of the legs of passersby. Torun's cinematographer Charlie Wuppermann gets cats-eye views of their surroundings, his camera peering over their shoulders. The people who interact with them all find improvement to their lives, one man rescued from devastating depression by feeding cats as therapy and treating them for common ailments. Torun doesn't mention neutering and we wonder how long these cats can multiply before they upset their ecosystem. Sadly, Istanbul is being built up, one outdoor neighborhood market the cats' only haven amidst steel towers. But the Turks seen in "Kedi" hold their feline brethren in high regard and this hopeful film gives us hope for their future. Grade:

Director Torun has a ready-made audience: cat lovers (of which I am a lifetime member) and succeeds in showing how a critter, loved, hated or ignored, can gain and keep the heart of a city. I have been to many places where cats roaming around freely are common. But, for me these locals have always been small fishing towns where the cats are a part of the quaint scenery, not a metropolis of some 20 million people. In Istanbul’s neighborhoods, themselves the equivalent of a village, cats are not just accepted by the shopkeepers, fishmongers and tourists. They are, by many, loved and cared for, and their human friends make sure their little moochers get enough food to feed their kittens, too. In exchange, some, like Aslan Parcasi the Hunter, control the rat population to repay their benefactors. Others, like the Lover, Bengu, have the job of providing affection and copious purrs to all. The other members of the seven are Sari the Hustler, Psikopat the Psycho, Diniz the Social Butterfly, Gamsiz the Player and Duman the Gentleman. Each of the seven subjects have unique personalities and help dissuade the cat-haters’ opinion that “all cats are the same.” These felines are the microcosm of the hundreds of thousands cats populating and co-existing with the human inhabitants in Istanbul. The idea of free ranging cats, especially in a major metropolitan city, may seem weird, even offensive, to others. Fortunately, director Turon and her dedicated crew took the time and made the amazing effort to bring to light how a little creature can provide such a positive influence on us poor, dumb humans.