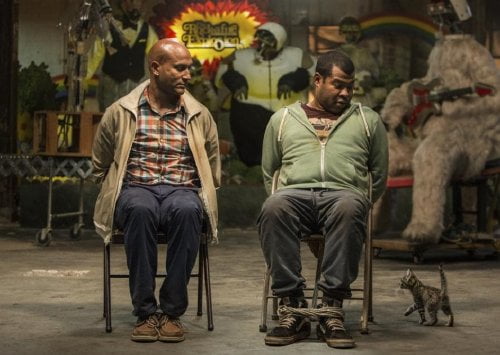 An illegal drug factory is attacked by the Allentown brothers and, in the process, the drug maker’s adorable kitten, Keanu, runs away. The little guy ends up on the doorstep of Rell (Jordan Peele), a pot smoking slacker whose girlfriend left him. His best friend, Clarence (Keegan-Michael Key), drops by to help him shake the blues but things go nowhere as expected in “Keanu.”

When the fearful Allentown Brothers take down a drug lab, only a little kitten escapes. He shows up on the doorstep of Rell Williams (Jordan Peele), lifting him out of a depressive funk and inspiring a rash of creativity. But Rell's next-door neighbor Hulka (Will Forte, TV's 'The Last Man on Earth') is a pot dealer and when vengeance hits the wrong address, Rell and his buddy Clarence (Keegan-Michael Key) go undercover to find "Keanu." After running a popular sketch comedy show for years, Key and Peele lean on the Internet's most popular subject, kitties, for their first foray onto the big screen. Keanu is certainly adorable, but scripters Jordan Peele & Alex Rubens don't give him, or the stars, enough to do. There are just enough laughs in watching the pastel-cotton-plaid-shirted, beige-windbreakered Key and the mint-velour-hoodied Peele try to pass for street to make this work more than not. After Rell's is ransacked, he finds a clue leading to the Blips, the gang formed by those kicked out of the Bloods and Crips. Sure enough, lead banger Cheddar (Method Man, "8 Mile," "Trainwreck") has Keanu by his side, wearing an itty bitty do-rag and bling, now dubbed New Jack. The guys, who've been mistaken for the Allentown baddies, are tasked with training his crew how to unload his latest pharmaceutical blend Holy Sh*%&t in exchange for the kitty. Their adventures will take them to the home of a famous comedic actress where Rell witnesses Hi-C's (Tiffany Haddish, "Meet the Spartans") bloody mayhem while Clarence gets Bud (Jason Mitchell, "Straight Outta Compton"), Trunk (Darrell Britt-Gibson, TV's 'You're the Worst') and Stitches (Jamar Malachi Neighbors) into the stylings of George Michael out in the getaway minivan. But just when they've collected their reward, the real Allentown guys return. Little Keanu will go through one more name change when rival drug lord Bacon (Luis Guzmán) recognizes him as Iglesias. Cat wrangling is admirable - the five kittens who portray Keanu are true action stars. Costumer Abby O'Sullivan gives a big assist. Each member of the cast, including that cameoing actress and the titular, unseen star, gets his or her moment to shine. But cute as it is, "Keanu" is just a bit of fluff. Grade:

If you have seen “Key & Peele,” the Comedy Channel skit show, you will maintain that familiarity with “Keanu.” To its credit, the film maintains a not-quite steady stream of laughs and chuckles. But, the TV comedy origins wears thin as “Keanu” moves from one set skit to another. One problem is there is simply not enough of the cute-as-a-button titular character. The filmmakers make Keanu a real player just by doing kitten things. When Keanu appears wearing a do-rag, the whole audience did a collective “Awwwwww.” As said, the laughs are not a constant but there are enough to make “Keanu” a good bit of fun. The episodic nature has the viewer moving from one comedy situation to the next. The team needs more experience if they plan to make funny features. But their big screen debut, directed by Peter Atencio and written by Jordan Peele and Alex Rubens, has enough yucks and Keanu, who speaks during a hallucinatory experience by Clarence (listen closely), to make me curious to see their next work.