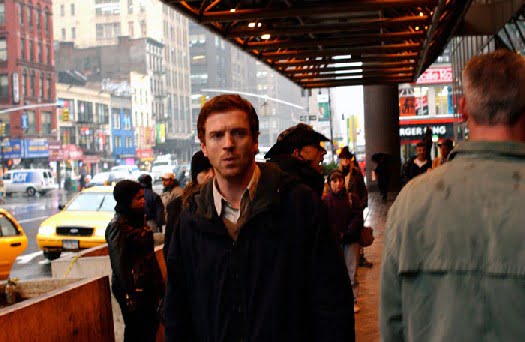 A man questions the ticket sellers and travelers of New York's Port Authority, asking if they've seen the little girl in his newspaper clipping, his daughter, Sophie. He acts fairly frantic, but speaks rationally, but we get the impression he's been doing this for months and then he begins his personal mantras, instructions to himself repeated incessantly. The man who has obviously lost more than his daughter is William "Keane."

Writer/director Lodge H. Kerrigan ("Clean/Shaven," "Claire Dolan") has tackled the subject of schizophrenia and loss of a child before in his first film, the extraordinary debut "Clean/Shaven" (which also featured a great performance by Peter Greene), but "Keane" shows the hallmark of a mature filmmaker. Shooting quickly, in long takes that almost never leave star Damian Lewis ("Dreamcatcher," "An Unfinished Life"), "Keane" is a quietly engrossing film and Keane's eventual redemption will both move you and make you sigh in relief. Our conclusions about Keane are confirmed when he presents a disability check to the rooming house clerk who has secured his room for lack of payment. We follow Keane as he questions a woman about her daughter's clothing size in a budget store, then drinks double vodkas in a bar, spitting out half remembered lyrics to the Four Tops "I Can't Help Myself" in a bout of frenzied self-therapy. He continues to haunt the Port Authority, mumbling about a man who he seems to expect at 4:26 p.m., and assaults a stranger. But Keane is forced to maintain an outward social shell when he approaches Lynn (Amy Ryan, HBO's "The Wire," "War of the Worlds"), a young woman who's checked into his hotel, with an offer of $100 to help her out. It's her young daughter, Kira (Abigail Breslin, "Signs"), who has drawn his attention, and all too soon Lynn is entrusting the helpful stranger with Kira's care as she tries to work out a more permanent situation for them with an absent father in upstate New York. And Kerrigan and star Lewis (in a breakout performance) keep William Keane together for almost twenty-four hours, turning the heat up slowly as first, Keane gets a message that Lynn can't make it home that night, then again as he starts to slip into paranoia at a public skating rink, held together by the calm reaction of his young charge. Kerrigan maintains that balance on the thin line between sanity and madness throughout his little miracle of a film, by never wavering from Keane's wavering perspective and Lewis's performance is wisely restrained, his Keane a quiet man easy to ignore, his period lapses anomalies we believe actually more like hope) he can regain control over. Kerrigan's fleet method of filming his story (cinematographer John Foster ("Tully") used 400 foot magazines for four minute takes which Kerrigan claims to have mostly edited in camera) and lack of a musical score also enhance the sense of a fragmentary reality, with scenes that abruptly change to other times and places as if Keane may have lost sense of what happened in between. Kerrigan has also succeeded with young Abigail Breslin, who also be given credit for the almost unnatural composure with which she reacts to what must surely be distressing circumstances. The relationship which builds between the troubled man and abandoned little girl achieves a state of grace which only enforces the film's cathartic climax, hanging in the balance as it does of the riskiest of sacrifices. "Keane" is all the more absorbing for its near silence, broken only briefly by William's spikes of derangement. This is a film that builds until it has thoroughly earned its namesake's redemption, then quietly walks away.

A man haunts the New York Port Authority bus terminal searching for his missing child. No one can help him as he questions any and all to find a clue about his disappeared little girl, Sophie. But, for William Keane (Damian Lewis), the disappearance did not just happen, if it did at all, in “Keane.” Filmmaker Lodge Kerrigan reveled in the schizophrenia of his characters in his earlier films, “Clean, Shaven” and “Clare Dolan.” With “Keane” he continues his explorations into the troubled minds of his characters in a compelling, deftly lensed way. Damian Lewis, whose talents first struck me in his role as the strong, capable Major Winters in HBO’s Band of Brothers,” gives a tour-de-force performance as the title character in “Keane.” William is obviously a very troubled individual who cashes his monthly Federal disability check to pay for his fleabag hotel room, booze, drugs and, occasionally, food. There is nothing physically wrong with the man so you know his infirmity must be mental. As he scours the bus terminal for clues about his missing daughter, it becomes pretty obvious that there is some serious delusion going on. Things take a turn when he meets Lynn and Kira Bedik (Amy Ryan and Abigail Breslin), a mother and daughter living in the same hotel. Seeing Lynn’s obvious fiscal plight, he offers her $100, no strings attached, and, for the first time in a long time, he has a family again. When Lynn asks him to take care of Kira, he agrees and the man and little girl form a bond. But, his psychosis is never far from the surface and events take place that cause you to question everything you’ve learned about the man. Kerrigan, using long, hand held takes, follows Keane around New York’s seamier side and the result is a captivating character study. Damian Lewis is superb as the troubled man and gives a noteworthy performance. Keane” is a harsh, often gut-wrenching film that will struggle to find an audience. But, the daring filmgoer will see the film’s merits and, I hope, embrace it. Schizophrenia is not an easy subject and it is not any easier here. It is a worthwhile and intriguing film that really should be seen by many more than, I fear, actually will.