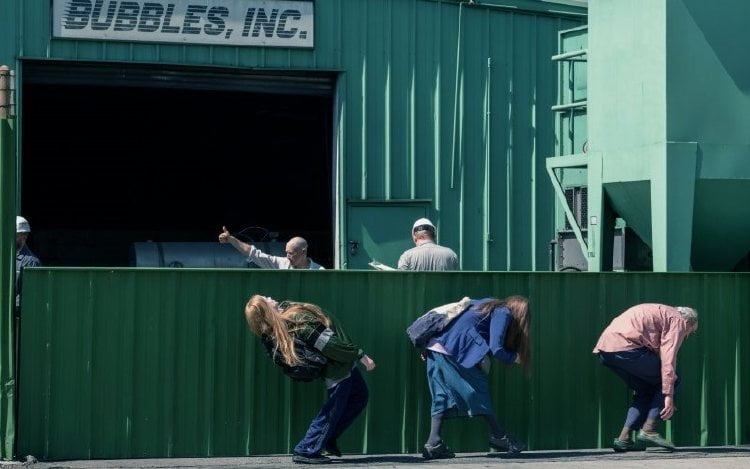 Robert (Richard Jenkins) and Theresa Dyne (Debra Winger) have created a uniquely weird life for themselves, surviving with grifts and petty thefts, living in empty, compromised office space.  Unfortunately, that is the only existence their 26-year-old only child Old Dolio (Evan Rachel Wood), who was named after a homeless man, has ever known, but she begins to question it when her parents invite a gregarious stranger, Melanie (Gina Rodriguez, TV's 'Jane the Virgin'), into her own scheme in “Kajillionaire.”

I’ve been one of the rare few who, up until now, hasn’t been taken with indie darling Miranda July ("Me and You and Everyone We Know"), mostly because her female characters have been far too dependent upon a relationship with a man to determine their self worth.  With her third feature as writer/director reflecting on unconventional parenting and the nature vs. nurture argument, she’s finally won me over.  “Kajillionaire’s” protagonist has a strong enough inner life and innate ability for critical thinking that she is able to break away from everything she knows to forge her own path (it is entirely coincidental that her protagonist’s sexual awakening arrives via a same sex partner).

As soon as we meet them, it is readily apparent that the Dynes don’t spend one red cent that they do not have to, Theresa and Old Dolio’s hair flowing down to their hips, mom’s dress causing her to be mistaken her for an Amish woman while her daughter frumps in oversized dark colored track suits. With July’s signature embrace of the absurd, the three Dynes move with the subterfuge of a special ops group, Old Dolio flipping over a rail and somersaulting her way into a local post office to steal packages, the parents bending forward at the waist, their daughter back, to avoid being seen by their Jersey barrier obscured landlord Stovik (Mark Ivanir, HBO's 'Barry,' 'The New Pope').  The latter’s a great visual gag, as is their daily inconvenience of having to deal with the afternoon leak from Bubbles Inc., which sends a thick, foaming carpet of pink bubbles over the wall of their cubicle living space which the three tackle with a synchronized dance of scooping wastebaskets.

With the exception of the somewhat excitable Robert, the Dynes speak in businesslike monotones, Old Dolio’s voice deep and guttural.  There is no visible affection and we soon learn Old Dolio is uncomfortable with being touched when she is pushed to try and return a gift certificate for a massage and, unwilling to retreat with nothing, submits to masseuse Jenny (Da'Vine Joy Randolph, "Dolemite Is My Name").  But the whole family is pushed outside their comfort zone when Stovik demands their $1,500 in overdue rent and Old Dolio comes up with their most outlandish scheme – to fly to New York then immediately back to L.A. posing as strangers where she will claim lost baggage actually picked up by her parents.   Seated separately on that return flight, Old Dolio will be rattled watching her parents embrace their seatmate Melanie in ways she’s never experienced.

And July foreshadows just how shook up her protagonist will be with a series of earthquakes and airplane turbulence (later, the possibilities of a hot tub will induce sexual anxiety).  Melanie, in her skin tight, shoulder baring attire, also gets Old Dolio all shook up in other ways.  But while the relatively ‘normal’ Melanie falls into the Dynes’ weirder lifestyle, she recognizes how Robert and Theresa’s hands off approach to parenting (‘we didn’t want to treat you like a child!’) has stunted their daughter’s emotional growth.  When that $1,500 check arrives unexpectedly from the airlines, Old Dolio breaks away from their ‘split three ways’ lifelong contract, leaving her parents to reconsider their approach.

Evan Rachel Wood really shines as the socially awkward, almost feral, Old Dolio, her inwardly shrinking body language at odds with displays of athletic grace.  Watch as she walks behind Jenkins and Winger like an Emirati wife, head down but fingers flying towards any pay phone coin return that crosses her path, her entire body language like a magician’s misdirection.  Jenkins has the focus of an obsessive nerd while Winger’s performance echoes her progeny’s.  Rodriguez has an awkward balance to navigate and she pulls it off beautifully, aggressive enough to annoy the more average airplane seatmate, compassionate enough to recognize the humanity of her own marks.

Robert Dyne may realize he will never be a ‘Kajillionaire,” but when his daughter learns the simple joy and maternal warmth of a stack of pancakes, the entire Dyne family receives the gift of familial bonding and new horizons.

The tiny family of misfit con artists – Theresa (Debra Winger), Robert (Richard Jenkins) and their daughter, Old Dolio (Evan Rachel Wood) – eke out a living of sorts robbing PO boxes and stealing and pawning their ill-gotten gain. It is not exactly a good life but it kind of pays the bills. That “stable” existence is disrupted when mom and dad enlist a new member, Melanie (Gina Rodriguez), to join their con artist gang in “Kajillionaire.”

Do not think “The Grifters (1990),” Stephen Frears’s edgy, small-time conman tale, when you watch writer-director Miranda July’s take on a family living by grifting alone. And, they are not very good at it. While on one more of their questionable cons – this one swindling an airline with a fake lost baggage claim of $1575 – Theresa and Robert meet Melanie and Old Dolio sees her life change.

More than anything, I came away from “Kajillionaire” feeling that I saw a very subtle, quietly intense character study by Evan Rachel Wood as the oddly named Old Dolio. She shirks physical contact but, at the same time, you realize that she needs that contact and never, ever got it from her always scheming parents.

When Melanie enters the picture, you think the story is going to go down one path but, instead, follows another, entirely different direction. The tight chemistry among the four stars helps to give you an idea of the original trio’s life and why Old Dolio is the way she is. Melanie adds a dynamic to the family life that, for Old Dolio, is the catalyst for her liberation.

Filmmaker Miranda July takes a quirky tale of a family of con artists and, with her fine cast, allows the viewer to take part in their lives as a participant and not just an observer. It is a gentle and thoughtful tale that, in the end, gives a glimmer that there is hope in life.