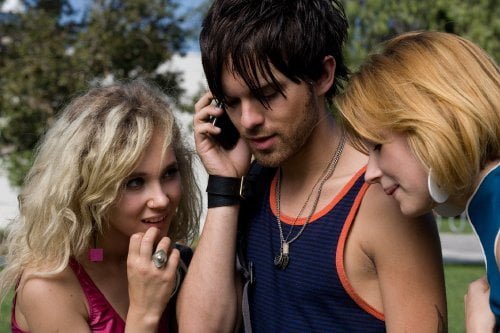 College student Smith (Thomas Dekker, "My Sister's Keeper," 2010's "A Nightmare on Elm Street") has been having weird dreams and finds his 'undeclared' sexual status stressed by his roommate Thor (Chris Zylka, TV's '10 Things I Hate About You'), 'dumb as a box of rocks' but with the body of a god. As Smith negotiates college with his best friend Stella (Haley Bennett, "The Haunting of Molly Hartley"), he acquires a new girlfriend, London (Juno Temple, "Atonement," "Year One," "Greenberg") and discovers that not only she, but The Messiah (James Duval, "Nowhere," "Donnie Darko") are sharing apocalyptic dreams in "Kaboom." Writer/director Gregg Araki ("The Living End," "Mysterious Skin," "Smiley Face") serves up his latest highly sexualized youth-in-confusion outing with impish, imaginative humor and a dose of psychological sci-fi. "Kaboom" is like Araki's own "Rocky Horror Picture Show" with its fetishized aliens, hetero, homo and three-way sexual couplings and its hero's obsession with an iconically named blond surfer dude. This ultra low budget goof has all the earmarkings of cult. Smith tells his delightfully snide Stella that although Thor waves the hetero flag, he uses deodorant daily, admires his own body more than most body builders and keeps his large collection of flip flops color coded. But before he can explore more with Thor, Smith takes up with London, a lusty Brit, just as Stella becomes preoccupied with Lorelei (Roxane Mesquida, "Fat Girl"). But Lorelei becomes eerily obsessive, convincing an alarmed Stella that she is a witch while Smith finds his dreams haunted by a Red-Haired Girl (Nicole LaLiberte, "Dinner for Schmucks") and abductions by animal masked men. Then dreams begin to intrude on reality. Do all the hot, gorgeous men coming on to Smith have an ulterior motive (one of them, Brennan Mejia, from TV's 'iCarly!')? Araki's writing and cast are particularly sharp here (Temple nabbed the role Rooney Mara auditioned for), a lot of lines laugh out loud funny. Dekker's an appealing protagonist and Haley Bennett would have a breakout role on her hands if Araki films had wider audiences. Kelly Lynch ("Drugstore Cowboy") makes a few brief appearances as Smith's mom. The heaps and heaps of sex are used for laughs more often than not (Smith catches Thor trying to self fellate and Thor carries on a conversation on his methods as he continues). The film looks like it was made on a 5 figure budget within an educational facility after hours, but somehow Araki makes that part of his film's charm. His excellent taste in music also makes "Kaboom" practically beg for a soundtrack CD (apparently there will not be one) with selections from The Big Pink, Airiel, Interpol and the Yeah Yeah Yeahs among others, all woven well into the background of Araki's action.