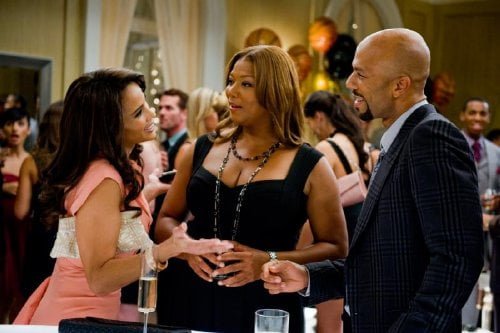 Basketball mad physical therapist Leslie Wright (Queen Latifah) can't believe her luck when she runs into her favorite player, the New Jersey Nets's Scott McKnight (Common, "Wanted," "Date Night") at a gas station, and, after helping him figure out how to open his gas cap, gets a personal invitation to the birthday party her cousin and her gold digging pals have been angling for for weeks. Leslie takes Morgan (Paula Patton, "Precious: Based on the Novel Push by Sapphire") with her and is astonished to watch the girl play Scott like a fiddle. He falls for it, even when his own mother can see that Leslie is the one that's "Just Wright."

Screenwriter Michael Elliot certainly hasn't come up with anything one would exactly call new, but the always likable Queen Latifah and rising star Common have charisma and chemistry to burn in a romantic comedy that just might begin restoring faith in the genre. Director Sanaa Hamri ("The Sisterhood of the Traveling Pants 2") balances the personal and professional lives of her two leading characters, giving us real, albeit idealized real, people who never once make a pratfall on their way to finding each other. Leslie's so used to having her own needs quashed by those of her flashier 'Godsister,' she lets herself be dragged from a party she was thrilled to be at twenty minutes after getting there. Morgan's 'emergency shelter volunteer' ruse works, though, as the intrigued McKnight tracks them down to Leslie's 'fixer upper,' a house most of us would be more than glad to call home. Soon the couple's engaged, much to Mama McKnight's (Phylicia Rashad, TV's "The Cosby Show") disapproval, but Leslie vicariously basks in Morgan's media glow. But Scott goes down on the court during the All Star game and the prognosis is not good. In fact, it's so bad rumors begin to mount that the Nets may not pick up his contract. Shortly after installing Leslie as Scott's physical therapist, Morgan bails on what she sees as diminishing returns, but Leslie's faith in her man accomplishes miracles. Morgan is the obvious obstacle, as all romcoms need something or someone to get in the way of true love and, as the pretty one who always deflects attention away from her more buxom buddy, Paula Patton is pretty and shallow as required, but sleek and sophisticated enough to believably turn the head of a pro athlete. It's her second coming, another paint-by-the-numbers plot device, that doesn't ring quite as true. Still, nothing diminishes the slow build of the Leslie/Scott romance. Latifah is a confident, down-to-earth Leslie who exudes good humor and ability but who has been labelled the 'good friend' in too many fledgling romantic possibilities. She can go from a Nets' jersey and sweats to evening wear with ease and, although thrilled to be around NBA players, doesn't gush or giggle. Common has to walk a wigglier line and he zigs and zags around his two female costars as well as he does on the court. Common can express a lot through his eyes and he is able to convey that Scott is attracted to Leslie without realizing he's *attracted* to Leslie. His McKnight might be a pro player, but he's a good guy and the character's preference to Morgan over Leslie may make you want to swat him, but affectionately. We all know where this is going anyway. Still Latifah's restraint and Common's honorable befuddlement cooks up some real warmth. As Leslie's parents, Lloyd Wright (James Pickens Jr., TV's "Grey's Anatomy") is a charmer as the father frustrated by the male world's inability to be knocked over the way he is by his daughter while Pam Grier's Janice is halfway between Lloyd and those who need some shaking up (in an early scene, Janice presents the diamond earrings that bagged both her mother's and her own husband to - Morgan - because she fails to see Leslie's potential glamour). Phylicia Rashad plays Scott's mom as a human diving rod - it's a pity she disappears from the action after the film's first act, as the actress could have nailed some sarcastic summations of subsequent behavior. The film provides just enough support - among the Nets and Leslie's PT colleagues - for some solid one scene players to flesh out the leads lives and likability quotients. Elliot works in some character defining parallels - Leslie's ramshackle old Mustang inherited from her grandfather vs. Scott's just-off-the-showroom floor sports car, the difference in reaction between Leslie and Morgan to Scott's side passion - and the fact that the first works better than the second is endemic of his screenplay, just the way Morgan disappears completely, only to pop up as a plot device. But he also gives Leslie's life direction a parallel that is refreshing, another indication of her worth, and with Latifah and Common, at least the filmmakers' central story line is a slam dunk.