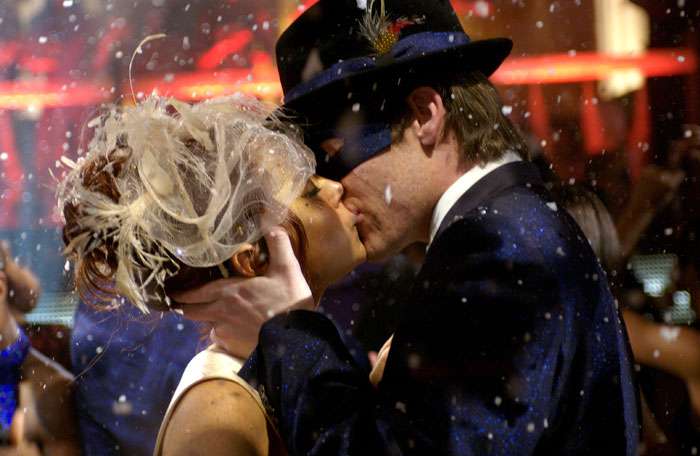 Ashley Albright (Lindsey Lohan) is the luckiest gal in New York City. She always gets a cab when she wants one and, no matter what, always comes out on top. Jake Hardin (Chris Pine), the industrious but hapless manager of a band called McFly, is her antithesis. Even when he does have good luck, it always turns bad. A chance encounter between these too opposites results in a spontaneous kiss. But, when it is finished and they separate, the luck for each does a 180 in “Just My Luck.” Argh, another teen chick flick!” I thought as I headed out to see “Just My Luck.” Don’t get me wrong, I liked Lindsay Lohan in “Freaky Friday” and “Mean Girls,” but I have grown tired of all the paparazzi publicity about her personal problems, how see copes, yada yada yada. So, I was surprised that I genuinely enjoyed this variation on trading places a la “Vice Versa” and the aforementioned “Freaky Friday.” This time only luck is exchanged, making for all manner of superstition – breaking a mirror, a black cat, throwing spilled salt over the shoulder and other old wive’s tales – to be trotted out. Just My Luck” could have been a dud if Lohan hogged the limelight. Chris Pine holds his own as the bad luck bear, Jake. Jake is so used to having things always go wrong that he carries an arsenal of first aid kit and supplies to repair the damage his unfortunate bad luck brings. His tribulations (and there are many) are met with resigned acceptance that can’t dampen his enthusiasm over getting the band and audition with big time record producer Damon Phillips (Faizon Love). Of course, anything that can go wrong will go wrong as Jake tries to get an audition CD in Phillips’s hands. Meanwhile, Ashley blithely accepts her constant good fortune that includes, among many other things, having a designer dress belonging to Sarah Jessica Harper erroneously delivered to her home. And, it fits perfectly. Ashley has come to expect the gods of good luck to smile upon her and she is stunned when, after the life-changing kiss, she breaks a heel. This is just the beginning of her bad fortune as she figures out when the change came and tries to locate Jake – no mean feat since they were both wearing masks at a masquerade party where they briefly met. For both stars the best part of “Just My Luck” is when bad luck rules. Chris Pine, in particular, does a fine job as the hapless Jake. One funny scene implicates him in molesting a woman on a busy jogging path that plays out in a satisfying way. Plus, Pine has a likable screen presence, especially as Ashley’s muse in the film’s later half. Lohan is cute enough as the incredibly lucky young lady but is best when her luck turns. She handles the pratfalls well and there are a couple extended mishaps that, with a simple act mushrooming into disaster, reminded me of the old “I Love Lucy” TV shows. That’s praise. Supporting cast is topped by a funny performance by Faizon Love as Damon Phillips who, through a stroke of good luck, is saved by Jake. Love revels in his fast-talking, time-is-money businessman that can still wonder with amazement when told by his assistant that he is worth $96/hour for every hour of the day. Damn!” is his reaction. Missi Pyle is reliable as Ashley’s boss, Peggy Braden, using her pinched looks to good effect. Tovah Feldshuh has a good deal of fun as a fortune-teller, Madame Z. The members of the real life band, McFly (Tom Fletcher, Danny Jones, Harry Judd and Dougie Poytner performing a couple of pretty good songs), do well enough, as do Ashley’s loyal sidekicks, Maggie and Dana (Samaire Armstrong and Bree Turner). The many handed story and script team do a surprisingly good job in putting a fresh spin on the trading places theme. Of course, they lay on the message, by the end, the importance of having walked in another man’s shoes to make one a better person. I can forgive this schmarm in light of the enjoyable performances by Lohan and Pine. Production and costume design suit the varied nature of the film. New York City locations are used well. Just My Luck” is aimed squarely at the tweenie generation. Lindsay Lohan will draw the femme fan crows that, in turn, will bring their boyfriends. Don’t worry guys, its not just another teen chick flick.