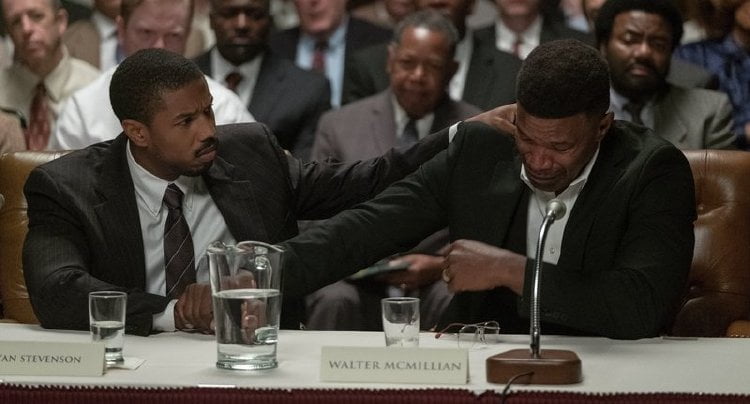 Newly-minted Harvard Law School-graduate and attorney Bryan Stevenson (Michael B. Jordan) takes on the daunting task to protect the legal rights of wrongly-accused death row inmates in Alabama. One of his condemned clients is Walter McMillian (Jamie Foxx), a man convicted of a heinous murder despite the preponderance of evidence that proves his innocence in “Just Mercy.”

In 1987, Walter ‘Johnny D’ McMillian (Jamie Foxx) was driving home after a day on site with his pulpwood business when he was stopped by Monroeville, Alabama’s Sheriff Tom Tate (Michael Harding) and arrested for the murder of an 18 year-old white woman who’d been shot and strangled. The black man was railroaded through a court trial where the sole evidence was supplied by convicted murderer Ralph Myers (Tim Blake Nelson). He had given up hope when a young black lawyer who had founded the Equal Justice Initiative, Bryan Stevenson (Michael B. Jordan), convinced him to fight for “Just Mercy.”

Back in 2013, cowriter (with Andrew Lanham)/director Destin Daniel Cretton burst onto the scene with a powerful adaptation of a prior short of his, “Short Term 12.” He followed that up with an adaptation of book, “The Glass Castle,” four years later to lesser effect. Now, adapting the nonfiction book by Bryan Stevenson, Cretton delivers his most disappointing work to date, a mediocre, cliché ridden, speechifying tale of the fight to free an innocent black man railroaded by racist Southerners. Cretton needs to find new inspiration.

“Just Mercy” isn’t a bad film, per se, it’s just been told before in this very same way. Johnny D is given no background other than that he is a black business owner in Alabama before he’s tagged for murder (we later learn about a rift with his family, including wife Minnie (Karan Kendrick, "The Hate U Give"), because of his affair with a white woman, a subplot barely scratched given the racial implications on his case). Cut to idealistic young lawyer Bryan Stevenson (Michael B. Jordan) making his first visit to Death Row where he is shocked to meet a young man much like himself being treated by prison guards as something subhuman. After taking leave of his fretting mama in Delaware, Bryan arrives in Alabama to find himself denied an office, his new, unpaid Director of Operations, Eva Ansley (Brie Larson), incensed at the injustice, taking him home. On his first trip to visit Death Row inmates, a smirking guard questions his legal credentials then insists on a strip search which Bryan submits to, Jordan suppressing burning rage. Bryan is constantly encouraged to visit Monroeville’s ‘Mockingbird Museum’ (Harper Lee’s classic was written there), which DA Tommy Champan (Rafe Spall) describes as ‘one of the great Civil Rights landmarks of the South’ with a straight face.

After uncovering a copious amount of evidence proving Johnny D’s innocence (he was with a huge crowd of people at a Church fish fry when the murder happened), Bryan still cannot get the man acquitted. His witness Darnell Houston (Darrell Britt-Gibson) is intimidated into not testifying and a seemingly sympathetic judge astonishes by deciding Myers total recantation of his prior testimony hasn’t proved perjury. It takes a 1992 ’60 Minutes’ story to embarrass the DA into dropping all charges (in one of the film’s best moments, Champan gets severe side eye from his wife during its airing).

Jamie Foxx gives some subtle shadings to a man who’s lost all hope within a racist justice system, but his resignation implies cowed victimhood that settles uncomfortably over the entire film. There are the requisite prison buddies, Herbert Richardson (Rob Morgan, "The Last Black Man in San Francisco") the sacrificial lamb (and PTSD afflicted Vietnam vet) who cannot be saved in time, Anthony Ray Hinton (O'Shea Jackson Jr.) the cheerleader who gets his closing credits due. With the exception of that strip search, Michael B. Jordan is pained and earnest throughout. Larson, who came to prominence in Cretton’s first film, provides white moral outrage. But here’s the thing – in a film about an outrageous miscarriage of justice, there’s far too much nobility on display. When the DA hands the case to Stevenson, a heavenly choir erupts on cue to eye rolling effect. And yet for all this holy exultation, the everyday song remains the same – the railroading, corrupt Sheriff Tate was reelected six times after McMillan’s acquittal.

Destin Daniel Cretton directs and co-adapts, with Andrew Lanham, attorney Stevenson’s book, Just Mercy: A Story of Justice and Redemption, and begins the film with the title, “Based on a True Story.” This usually raises a red flag for me but, here, the story adheres, mostly, to the facts.

We meet Bryan following his legal internship and entry to the Bar. With law degree in hand, he joins the Equal Justice Initiative and journeys to the Alabama Correctional system to represent death row inmates in their appeals to stay their executions. One inmate in particular, Walter, AKA Johnny D, is an obvious case of a miscarriage of justice
and the lawyer throws himself into getting his client a new trial. “Just Mercy” follows Stevenson’s heroic efforts to get Johnny D free.

Though Michael B. Jordan is the star and focal character in this true story, the actor is overshadowed by the supporting cast, especially Foxx and, in a touching performance, Rob Morgan as Herbert Richardson, a war vet whose crime was caused by PTSD brings tears to my eyes. Tim Blake Nelson is also notable as Ralph Myers, the convicted inmate whose coerced testimony put McMillian on the DR. Jordan is more a sounding board for his clients as he tries to maneuver thru hate, prejudice, racism and a gross miscarriages of justice,

“Just Mercy” brings to light, in a straightforward way, the compelling argument against the death penalty, something I have been against my entire adult life. Will it change the pro-death laws in those states that still have it? I doubt it, but hope it will.