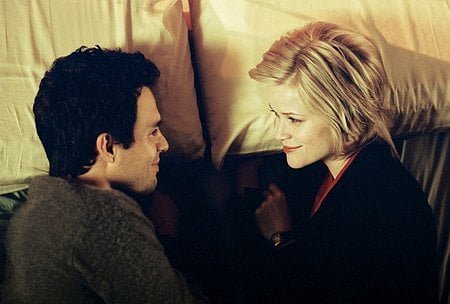 Elizabeth Martinson (Reese Witherspoon, "Vanity Fair") is a dedicated doctor who needs to be told to go home after twenty-six hours at the hospital. She's on her way to her sister Abby's (Dina Waters, "The Haunted Mansion") and a blind date when she's involved in a head-on collision. Only when her spirit has the time to hang out in her San Francisco apartment, which has been sublet to grieving widower David Abbott (Mark Ruffalo, "13 Going On 30"), does Lizzy discover life can be "Just Like Heaven."

The stars certainly prove their worth here, elevating somewhat tepid material (adapted from Marc Levy's novel "If Only It Were True" by Peter Tolan ("Guess Who") and Leslie Dixon ("Freaky Friday," whose old apartment was used as Elizabeth's), which threatens to morph into a right wing Terry Schiavo screed in its climatic moments, into a pleasant romantic comedy experience. Witherspoon's top-notch timing combined with adorably apt facial contortions and Ruffalo's shaggy dog charm (not to mention an unknown talent for physical comedy) make for a classic comedy coupling. David finds fault with every luxe San Francisco apartment he sees until a persistent flyer sends him to a cozy spread with a great view. David, it turns out, seems only to want a comfy couch to envelop him while he drowns his sorrows watching his old wedding video, until one day he's accosted by a 'little blond control freak' in his own living room who claims the place is hers. After witnessing Lizzy vanish into thin air and discovering his apartment was sublet due to a family tragedy, David decides to investigate the world of ghosts. A helpful supernatural bookstore clerk, Darryl (Jon Heder, "Napoleon Dynamite"), gives him a pile of reading material, but nothing raises this spirit like the threat of a glass without a coaster. Darryl does turn out to be helpful when he's around Elizabeth, however, and her acceptance of his prognosis - which is for Dave to move out - is enough to get Dave to dig his heals in yet become determined to help Elizabeth find out what, exactly, happened to her. While there is one rather unique twist to this metaphysical romance, it is mostly a somewhat shopworn retread of others that have come before. Still, Reese finally gets a screen partner who's up to her high standards, making this her best romantic comedy to date. Director Mark Waters ("Freaky Friday," "Mean Girls") unveils Ruffalo's physical side as he cuts back and forth from David's point of view, which includes Lizzy, to an external one, which does not. Ruffalo, therefore, must smoothly transition between acting against Witherspoon and then, nothing, which he aces to great comic effect - this device works especially well as Lizzy coaches David through an emergency incision for a stricken restaurant patron. Ruffalo also nails a backwards fall across furniture like a seasoned slapstick pro. Meanwhile, Witherspoon tosses out observations like 'I may have been a lonely, home wrecking whore, but I saved lives' with such natural finesse, it takes a beat for your laughter to catch up with her. Jon Heder follows up his smash breakout in "Napoleon Dynamite" putting a stoner spin on "Ghost's" Whoopi Goldberg role and he's a delightfully funny presence. Also good is Donal Logue ("The Tao of Steve") as David's friend Jack who turns out to have an unknowing hand in his buddy's freaky 'pretend' relationship. Dina Waters is an empathetic character as the sister who is faced with making leaps of faith. Ben Shenkman ("Must Love Dogs") is serviceable as the resident 'bad' guy and Ivana Milicevic ("Love Actually") is sympathetic as an unwitting other woman. "Just Like Heaven" sticks with the standard San Francisco locations, with backdrops of the Golden Gate Bridge and the waterfront mostly viewed from within its pricey real estate. The gardens created as examples of David's work as a landscape architect are a bit too over the top in a bid to be romantic. Rolfe Kent's ("Wedding Crashers") score works in refrains of "The Cure's" 'Just Like Heaven,' which is covered over the opening titles by Katie Melua (the original recording accompanies end credits). "Just Like Heaven" may not live up to its title, but it is a worthwhile rest stop on a fluffy fair weather cloud.

David Abbott (Mark Rufalo) just wants to rent a furnished apartment in San Francisco that has a comfortable couch and, through an odd circumstance, finds such a place. He has some unstated personal issues and is, in a word, a slob. As he morosely sits on his requisite comfortable couch eating takeout and drinking way too many beers, a stranger, Elizabeth (Reese Witherspoon), appears out of nowhere and demands that he is invading her apartment. This begins an offbeat ghostly romantic comedy that is “Just Like Heaven.” Laura, my wife/critic (of movies, not me – well, sometimes me), planned to see “Just Like Heaven” on the strength of its title song by her idol, Robert Smith, of the band the Cure, and not on its star, Witherspoon. I’m not a really big fan of romantic chick flicks but, since I’d rather be with Laura than not and since I like Reese Witherspoon, I went to see JLH.” While “Just Like Heaven” isn’t a great movie, it is, because of its stars and small supporting cast and solid writing (screenplay by Peter Tolan and Leslie Dixon) and direction (by Mark Waters (“Mean Girls” and Freaky Friday”)), a funny, sweet little romantic comedy. Reese Witherspoon has established herself a likeable, capable actress who has a terrific flair for comedy and brings these qualities to the role of Elizabeth. When we meet this feisty character, we see her in her element as a hard-working resident physician at a San Francisco hospital where she routinely puts in 26-hour days. Her boss orders her home after one such shift, telling he tells her that she is getting a big promotion. Elated, she heads for her sister, Abby’s (Dina Spybey), place to meet a blind date. On the way there, fate puts her into the path of a big, oncoming truck. Jump to David as he is shown one furnished apartment after another until different kind of fate brings him to the one with the required comfortable couch. He moves in and proceeds to trash the place with takeout boxes, beer cans and rings on the coffee table. Morose over some unexplained loss, he sits and blankly stares at the TV when Elizabeth appears and demands that he leave her apartment. He’s not sure if he is just drunk or crazy and tries to ignore her ghostly presence whenever she shows up. Just in case he is not crazy, he picks up a bunch of books on ghosts from an occult bookstore run by psychic Darryl (Jon Heder in his follow-up to Napoleon Dynamite”). David tries exorcism, ancient Chinese rituals and a ghost-busting company to rid the place of Elizabeth but all attempts fail. Finally, he succumbs to her presence and the two try to get to the bottom of what appears to be a real haunting. Elizabeth does not see the typical “white light” of someone who has died, shows no signs of leaving and she is not able to remember anything about her past. Together, the pair tries to get to the bottom of the matter and, just maybe, fall for each other in the process. Helmer Mark Waters shows an assured hand at romance and comedy with “Just Like Heaven.” The source screenplay doesn’t cover much new ground but is clever enough to form the basis where his leads can hang their respective hats. The versatile comedic actress, Reese Witherspoon, is more than up to the task to breathe life into her character Elizabeth and firmly makes her real (and ethereal). Mark Rufalo does a fine job with the physical comedy that his role as David requires. Although he and Reese play off each other, there are many times when he is required to act alone when others’ point-of-view do not see ghostly Elizabeth. Donal Logue is very amusing as David’s shrink and friend, Jack, who is worried about the delusions his buddy appears to be having. Jon Heder is a riot as the psychic who understands David’s plight but also sees things from Elizabeth’s side, too. He becomes David’s advisor and the link that joins the natural and supernatural worlds. The production for “Just Like Heaven” is straightforward, using the San Francisco locale to nice effect. The ghost F/X are well handled across the board although I always wonder why a ghost can’t pick up a phone but never has a problem standing on the floor. Still, this ghostly romantic comedy is so good-natured that it is hard to fault minor nitpicks. Just Like Heaven” transcends the “chick flick” moniker that it coulda, shoulda had. The strengths and abilities of its stars and director raise this well above what it should be. This is a true date flick where the guys will be every bit as amused as the gals, even if it does have an expected sappy, romantic ending. The final note, involving Darryl, does bring a smile.