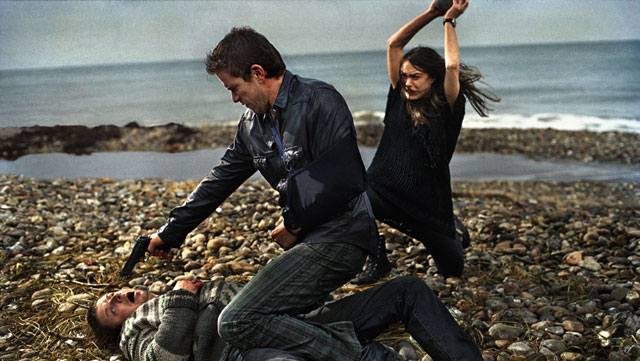 Jonas (Anders W. Berthelsen) is too cheap to replace his constantly breaking down car, much to the dismay of his wife, Mette (Charlotte Fich). It fails again during a day trip and Jonas stops the car on the highway without pulling to the shoulder. Julia (Rebecka Hemse) is returning home from Hanoi where she learned of a family tragedy. In her exhausted and distraught state, she fails to see the break down and swerves away at the last second – into the path of an oncoming vehicle. The horrible crash thrusts Julia into a coma. With a sense of guilt, Jonas visits Julia at the hospital, only to be mistaken, by her family, for Sebastian (Nikolaj Lie Kass), Julia’s boyfriend. Jonas does not dissuade them of their error in “Just Another Love Story.”

Before the title credit comes up, writer/director Ole Bornedal ("Nightwatch," remade in English with Ewan McGregor) treats us to three captioned 'Love Scenes.' In the first we see Jonas (Anders W. Berthelsen, "Mifune's Last Song," "Italian for Beginners") dying on the street from an overhead shot, as a blonde woman kneels by his side and sobs. In the second, the same couple romp in bed as the man tallies up how many times they've probably made love in ten years together. In the third, another man (Nikolaj Lie Kaas, "Brothers," "Adam's Apples") redirects the gun a brunette is pointing at his head towards his heart before she shoots. What is about to unreel? "Just Another Love Story." Jonas, who narrated his death scene, now tells us about his life, mortgaged 'to the hilt' in a new, fashionable apartment building in Denmark with his wife, Mette (Charlotte Fich), and their two blonde kids. He has an interesting job, he tells us. He always wanted to be a photographer, although he never thought he'd end up shooting crime scenes. He begins to tells us about Julia (Rebecka Hemse, "Music for Weddings and Funerals"), a woman who can only be loved with 'unbridled passion,' as we see her frantic, calling her mom to tell her she's leaving Hanoi but leaving Sebastian behind. Julia is the woman from that third love scene. As Jonas drives his family home in their junker of a car, it stalls out on a two lane highway. In the blink of an eye, an oncoming car, Julia's, crashes into theirs, careens into another and flips over (this scene is shockingly staged and is reminiscent of the fateful car crash in Kiewslowski's "Blue"). Jonas's family is rattled, but unhurt, and so he races to Julia's side. 'I don't want to die' she tells him, obviously in shock. Jonas, feeling partly responsible, goes to the hospital to see how she is doing and is mistaken for Julia's boyfriend, Sebastian. She is in a coma and he does not set them straight, especially when her doctor says his participation in her recovery could be the difference between life and death. Jonas vaguely tries to correct the wealthy Castlunds' incorrect assumption, but cannot resist their daughter. Cornered when she comes out of her coma, he is blessed that she cannot seem to remember a thing. She's also lost 90% of her vision. As Julia describes, in flashback, just why she doesn't want anything resembling a 'normal' life, we see Jonas living her description, a couple of couples, including his partner Frank (Dejan Cukic, a great Greek chorus to Jonas's conscience), visiting on a Saturday night. Jonas has an itch, though, and shocks Mette by leaving while their guests are still there. He's gone to visit Julia, who has just been alarmed by a weird visitor of her own, and their relationship soon becomes sexual. When Julia recovers more quickly than anyone had anticipated and is discharged, Jonas/Sebastian is welcomed into the Castlund family with open arms. His own family is left devastated. Then things take a twisty turn. Bornedal uses some very stylish flourishes that emphasize, rather than engulf, his substance here. Cinematographer Dan Laustsen ("Brotherhood of the Wolf," "The League of Extraordinary Gentlemen") achieves a dark, moist look for Hanoi and the hospital where Jonas's world is flooded with light. Superimpositions (Jonas imagining travel, Julia looming large) provide a fantastical feel to a life moving far from reality. Editor Anders Villadsen ("The Green Butchers," "Adam's Apples") deftly weaves two alternating stories together so that they comment upon one another, Jonas's life in audio over Julia's life in visuals. Dialogue is repeated throughout, as if commenting upon Jonas before and Jonas/Sebastian after. Sound is inventively used to punctuate the visuals (the respirator in Julia's hospital room, the jackhammer outside her Hanoi hotel). If only Bornedal's twist were as exciting as the suspense which leads up to it. Unfortunately, once he moves into his final, climactic third, the reality of his 'fantasy' feels too jury rigged and too familiar. (He's also tipped his hat casting perhaps Denmark's most famous actor as a character who gets killed way too early.) He redeems himself by throwing us an unforeseen punch line when he ends with his beginning, pulling his movie back up just when it's begun to slide. "Just Another Love Story," is, of course, anything but. See it if for nothing else but Bornedal's command of cinematic language.

Writer-director Ole Bornedal comes up with a clever, complex and sometimes perplexing story of happenstance as crime-scene photographer Jonas fights a battle of wills over the rattletrap that is his car. His stubborn stance, though, is the catalyst that will change his life and marriage forever when the clunker stalls on the highway. As we are come to this moment, Bornedal tells Julia’s parallel story, beginning with her getting bad news from home while she bums around Southeast Asia, then her rush back to Denmark. The sudden, violent accident that follows Jonas and Julia’s first meeting brings the two strangers together in a decidedly weird way. When Jonas fails to tell her family that he is not Sebastian, he begins to weave an elaborate web that makes him question his life and marriage to Mette. The arrival of the real Sebastian further complicates matter as the sleazy drifter hides his ulterior motives and identity. This is the type of story that could get very muddled and confusing but, while there are one or two missteps, overall it is a captivating tale of life, love and lies. The careful weaving of the complex story keeps your attention all the way through. Add a fine cast and crew and we have a very different, very interesting film.