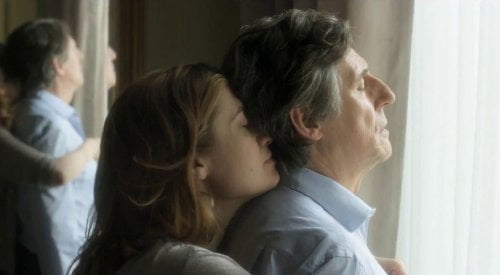 Alix (Emmanuelle Devos) is an actress on a train journey to Paris for an audition. Doug (Gabriel Byrne), a literature professor, is on the same train to attend the funeral of a dear friend in Paris. Their paths briefly cross on board the train and probably never would again. But, Alix later wanders into the church where the funeral is being held, sees Doug, and sparks begin to fly between the two in “Just a Sigh.”

Stage actress Alix Aubane (Emmanuelle Devos, "Read My Lips," "Kings & Queen") leaves her play in Calais for one day to take care of personal affairs and see her lover Antoine in Paris. On the train, she keeps making eye contact with a stranger (Gabriel Byrne, "Miller's Crossing," HBO's 'In Treatment') and although their initial meeting is thwarted when a third party steps in, Alix knows where to find Doug and the two embark in a torrid affair in "Just a Sigh." Actually, the French title "Le temps de l'aventure" or "The Time of Adventure" is more apt, except for the fact that this adventure appears to be entirely one sided. Devos, always an intriguing actress to watch, is here as well, running about Paris dealing with one frustration after another - she cannot reach her boyfriend Antoine, leaving countless voicemails from phone booths, her financial officer is not at the bank that day, an audition doesn't go well - and I would have been quite happy to continue watching her being melancholy, frustrated, embarrassed and worried until she returned to her stage. But writer/director Jérôme Bonnell is trying to create one of those l'amour fou films, where an instant attraction overwhelms. There's just one major, major problem - as the professor coming to Paris to attend the funeral of a former amour of his own, Gabriel Byrne sucks the life out of the screen every time he appears. In fact, it gets so exaggerated that every lovemaking scene becomes more unappealing than the last, as if Devos were being forced to make love to a corpse. If it weren't for Devos, I'd happily translate the title of this one to "Just a Slog," as getting through it was an endurance test from the forty minute mark onward. I kept hoping for some saving grace - that perhaps Bonnell was ripping off "Certified Copy" or even countless sitcom plots and that Byrne would turn out to be the elusive Antoine, one part of a couple play acting to add some spice. It would have made sense, with Alix being an actress who continues to play various parts throughout. But no, it was not to be. Devos didn't deserve "Just a Sigh" and her presence, at least without Byrne (he affects his costar almost as much as the audience), is the only thing to hang onto until the blessed 'Fin.'

“Just a Sob” (the sound I emitted when I realized that the movie was not even half way through) would have been a more appropriate title for this mostly dull movie. And, I can tell you the reason why it is dull: Gabriel Byrne. I do not know if it is the actor, the director or the material or all of the above but none work here. Byrne is supposed to be a melancholy man facing the death of a dear friend. When Alix comes into his life it should breathe some life into his character. Instead, we get a one note performance of a morose (not melancholy) man and Byrne is, in a word, wooden. Emmanuel Devos is also problematic as Alix, though not nearly as much as Byrne. The character comes across as scatterbrained and why she would be attracted to Doug is artificially constructed. The actress is fine outside of her relationship with Doug and the filmmaker Jerome Bonnell actually gets some good moments when the film’s focus is away from the couple. When Alix gets out and about Paris, there are some nice visual and auditory moments. We see a drum marching band plying there art for everyone’s pleasure, a group of street singers entertain the bystanders and a street band gives a cool performance. But these are brief asides to the predominant (and stunningly dull) story. The ending could not have (and unfortunately did not) come sooner. I felt a great weight taken off of my shoulders when the screen said “Fin.”