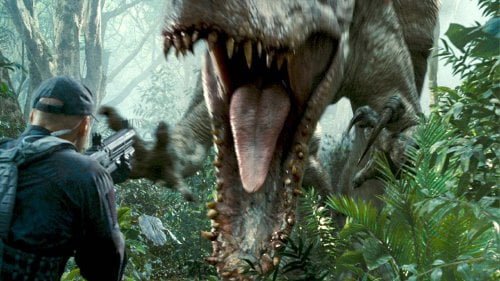 Cowriter (with his "Safety Not Guaranteed" screenwriter Derek Connolly and the "Dawn of the Planet of the Apes" team of Rick Jaffa & Amanda Silver)/director Colin Trevorrow has made a movie that both parodies and debunks its own reason for existence. Less a reboot than a far inferior remake, "Jurassic World" might provide some jolts for those unfamiliar with the original trilogy, but it admits its predecessor's superiority in its own climax. In its attempt to be bigger, louder and toothier, the film not only rehashes executive producer Steven Spielberg's original but borrows from his "Jaws" as well as "The Birds," "Oz's" flying monkeys and "Predator." The film begins by setting up relationships. Karen (Judy Greer, "The Descendents") has sent her reluctant 16 year old Zach (Nick Robinson, "The Kings of Summer") and thrilled 11 year old Gray (Ty Simpkins, "Iron Man 3") from Wisconsin to spend time with their aunt Claire, who hasn't seen the boys in 7 years and who promptly waves them off with VIP passes under the guardianship of her assistant Zara (Katie McGrath). Claire is busy with backers from Verizon Wireless, explaining that their huge operating costs are driven by the development of new dinosaurs, visitors needing new reasons to visit once the thrill is gone from seeing the plain old regular kind (just like this movie). We meet former Navy man Owen (Chris Pratt, "Guardians of the Galaxy") at a behavorial research base far from the visitor area, where he's training velociraptors Charlie, Delta, Echo and Blue to treat him as their alpha. He's also grappling with Hoskins (Vincent D'Onofrio, "The Judge"), a contractor who only sees the potentially hugely profitable military application in Owen's efforts. In the control room, Claire's right hand man Lowery (Jake Johnson, TV's 'New Girl') provides irreverent comedy (wearing an original Park shirt he found on eBay) when he's not flirting with colleague Vivian (Lauren Lapkus, "Are You Here"). Behind everything is billionaire Simon Masrani (Irrfan Khan, "The Lunchbox"), whose wonder is a reproach to Claire's analytical attitude (she calls the dinos 'assets'). Although Claire has assured him the containment for their new dino is secure, Masrani demands that she have Owen check it out. She arrives at his trailer in her cream suit and heels to find him repairing a motorbike - they're a study in contrasts and, of course, sparring former romantic partners. When Owen arrives at the steel and concrete facility, an alarm is raised when thermal tracking cannot locate Indominus Rex, the dino based on T Rex whose additional makeup is classified. Owen sees evidence that the dino's escaped, but it's a highly intelligent ploy and once the gate is opened for him to investigate, it gets out. Meanwhile Zach and Gray have given Zara the slip (a mistake she'll pay dearly for) and are off course in a restricted area of the park in one of its gyroscopes. Let the games begin. I still vividly remember seeing "Jurassic Park" for the first time in a theater. Its effects were unlike anything we'd seen before, but it also had characters we cared about, a premise based in real science and Jeff Goldblum spouting chaos theory. This one would have us believe that velociraptors can be trained like dogs and that Bryce Dallas Howard can run through jungles in 5 inch heels when she's not fetching a T Rex to do her bidding. The 'star' of the film, the Indominus Rex, is supposed to deliver the terror of the T squared, the 'little arm' problem solved with longer reach and long claws, its elongated head given more teeth, but it cannot compare to the 'real' thing. The film's other big attraction, the aquatic Mosasaurus, is "Jaws" redux. The only genuine moment any of these creatures has is the death of an Apatosaurus, done with animatronics. The PG-13 rating means that although we see sprays of blood and people vanishing into ginormous jaws, we don't see both in the same shot, nor do we see anything like aftermath - it's cartoonish consumption. The echoing boom that accompanied the movement of the T Rex is back for its bigger, badder enhancement - except when it needs to gives us a jump scare. The kids, especially Robinson, give the only natural performances in the film. Pratt looks heroic and plays stoic. D'Onofrio's character seems to exist to provide fodder for a sequel, Hoskins' collusion with Wong to get lab specimens off the island during the melee left unresolved. (Coming soon - "Jurassic War?") Grade: