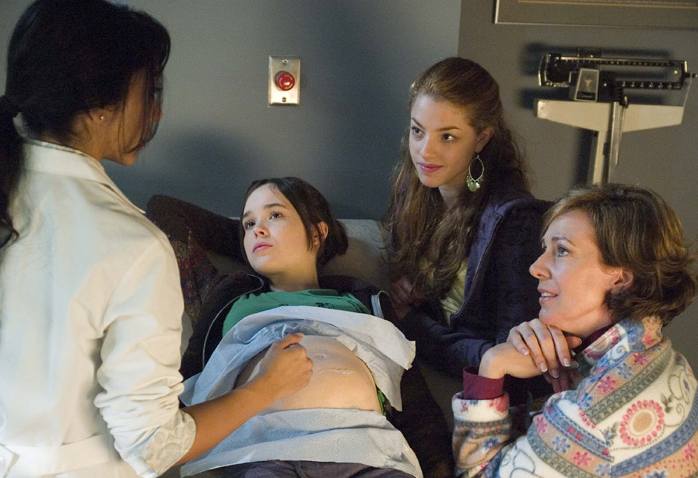 When a sixteen-year-old largely regarded as 'different' becomes pregnant after one sexual encounter with her best friend Bleeker (Michael Cera, "Superbad"), she is dissuaded from the typical route - abortion - by a sign-wielding student who informs her that her baby 'already has fingernails.' Best female bud Leah (Olivia Thirlby, "United 93") points her to ads in the Penny Saver, where prospective adoptive parents can be found. Upper middle class yuppies Vanessa (Jennifer Garner, "Elektra," "The Kingdom") and Mark Loring (Jason Bateman, TV's "Arrested Development," "Smokin' Aces") don't quite know what to make of the young girl who will make their dreams come true - "Juno."

This faddish Sundance fave features up-and-coming actress Ellen Page ("Hard Candy," "X-Men: The Last Stand") giving another intriguing performance as the title character, but director Jason Reitman of the overrated "Thank You for Smoking" cannot shape the funny dialogue and outrageous set pieces of newcomer (and ex-stripper) Diablo Cody into something resembling reality to ground his film emotionally. "Juno" feels manufactured for hipness. Practically no one in "Juno" speaks like a normal person. When Juno goes to a local store to double check her pregnancy test, the clerk (Rainn Wilson, TV's "The Office") engages her in verbal jousting. When Juno addresses her ex-Army dad (J.K. Simmons, "Thank You for Smoking," "Spider-Man 3") with witty cheek, he responds in kind. 'Did you barf in my hallway urn?' demands stepmother Bren (Allison Janney, TV's "The West Wing," "Hairspray"). When the duo learn their daughter's news they pine sentimentally for something like hard drug usage. Oh, and while Juno's name is explained as her dad's former Roman/Greek mythology obsession, much younger sister Liberty Bell's (Sierra Pitkin) etymology is left hanging (and her name is never shortened). Juno heads to the local clinic and runs into classmate Su Chin (Valerie Tian, AMC's "Broken Trail"), but one wonders why Su shouts 'All babies want to get borned' rather than 'All babies want to be born?' Cody creates more weirdness by fetishizing Sunny-D and orange Tic-Tacs, calling plenty of attention to them lest we miss her flair for quirkiness. Things look up, though, when Juno and her dad visit the Lorings and we find Vanessa, the only real person (well, perhaps Bleeker can be given a pass due to another sensitive geek performance from Cera) in a film full of cartoons. Vanessa and Mark's family dynamics can be spotted a mile away and Juno's role in their outcome shows the character as a real split personality - both creepy and kind (Bateman participates in the creepy part with equal ick and empathy). At least Juno ultimately takes a sympathetic (and moral) stand. Page does make herself a character arc, but one wonders what more experienced direction could have produced. Here Juno is as much defined by her red hoodies and propensity to chew on a pipe as she is by Page's softening of her initial wise-ass. Simmons and Janney are amusing (Janney does have one fine scene putting an ultrasound technician in her place), but never feel real. Sera isn't stretching from his "Superbad" performance, but his presence is welcome. Garner is a breath of fresh air, a flesh and blood person. In fact, it is telling that "Juno's" opening credits feature Page strutting along morphing from animated to real being, like "American Splendor" without the root cause. "Juno" features the outrageous family dynamics of "Little Miss Sunshine" without the humanity of its deeply flawed members or "Citizen Ruth" with skin deep politics replacing that film's sharp edge. It is an immature, if fitfully entertaining work.