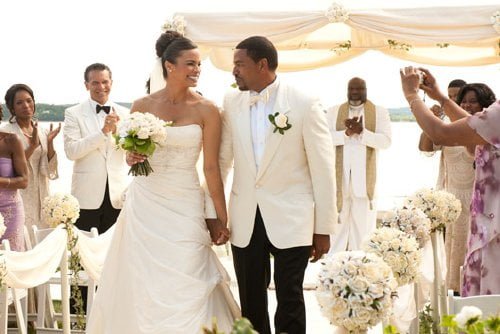 Sabrina (Paula Patton) and Jason (Laz Alonso) are deeply in love and, when Jason lands a job that will take him to China, he tells Sabrina that he cannot handle a long distance romance. Instead of breaking up, though, he proposes to her and the whirlwind wedding plans will bring two very different families together for a weekend on Martha’s Vineyard in celebration of their marriage in “Jumping the Broom”

After falling into bed with the wrong man once too often, Sabrina Watson (Paula Patton, "Just Wright") makes a promise to God that the next man she sleeps with will be her husband. Then she asks for a sign and Jason Taylor (Laz Alonso, "Fast & Furious," "Just Wright") steps into the path of her car. Five months later, the family gathers at the Watsons's Martha's Vineyard estate where Jason's blue collar ma, Pam Taylor (Loretta Devine, "Crash," "For Colored Girls") will meet her future in-laws for the first time and clash over just about everything, including her wish for the couple to honor the old slave tradition of "Jumping the Broom." There's a whole bunch of wedding movies being released now and while they all may make me wish for a divorce from the movie theater, this one, at least, is mildly amusing. Television director Salim Akil (TV's 'The Game') has given us yet another big, Black family gathering and another blue collar/upper middle class conflict wedding, but it plays less broad, more like real life, than most Tyler Perry films. It's unfortunate that Paula Patton, as the bride, is the film's least sympathetic character. It's hard to recognize the actress as the teacher from "Precious," because here she's a dithering princess who flip flops at the least provocation. But the film's not really about the bride and groom so much as it is about their mothers. Bassett is great as a snobbish former Caribbean landowner whose 'family owned slaves,' becoming more shrewish by the second as her fears that her investor husband Gregory (Brian Stokes Mitchell) is cheating on her. Loretta Divine is always a plus, and her Pam is the postal worker from hell who has made it her life's mission to prove that no girl is good enough for her son. Pam goes too far though, and the slowly changing expression on Divine's face as she realizes that is guilt and shame trying to act dignified. There's fun to be had with supporting subplots, like Blythe (Meagan Good, "Stomp the Yard," "The Unborn"), Sabrina's uptown maid of honor with too high standards, falling for the catering Chef (Gary Dourdan, TV's 'CSI') who knows just how to play her and the twenty-year-old cousin of the bride, Sebastian (singer Romeo), pitching woo to older woman Shonda (Tasha Smith, "Couples Retreat"), Pam's best friend. As the wedding planner, Julie Bowen (TV's 'Modern Family') is fun desperately watching her P's and C's. Production values are uneven with Nova Scotia a not-quite-convincing substitute for the Vineyard. Close ups often flirted with focus issues. The film sometimes seems like pieces were hacked out of it - characters and situations introduced, then dropped. The film trots out all kinds of entertainment bits with lots of male cheesecake on display, an early cameo by El DeBarge, Valarie Pettiford's ("Stomp the Yard") suggestive rehearsal dinner rendition of 'Sexual Healing' and the cliched big dance out with a group Cupid Shuffle. There's nothing new here, but the movie's an entertaining enough sit which should please its target audience.

The title of the film refers to an old custom from the Welch, the Romani (Gypsies) of eastern Europe and the inhabitants of East Africa. Here, it refers to the American slave custom when legal marriage between slaves was not allowed. Instead, the couple would make the symbolic jump to bond them together. Jason’s mom, Pam (Loretta Devine), when she receives her wedding invitation, is upset that she has never met Sabrina. She immediately takes this as a snub, knowing that Sabrina comes from a wealthy family and must look down on her. She packs up the marriage broom from her own wedding and, with her family and best friend Shonda (Tasha Smith), head to the Vineyard. Meanwhile, Sabrina’s mother, Claudine (Angela Bassett), is frantically preparing for the nuptials with the help of wedding planner Amy (Julie Bowen, providing comic relief). When Jason’s family arrives on the island and the two families meet, tensions build especially between Claudine and Pam. This is just one of the conflicts and foibles that writers Elizabeth Hunter and Arlene Gibbs pack into this family comedy. I will leave the rest to the mass audience that “Jumping the Broom” will attract. While I find the vast majority of the humor in “Jumping the Broom” to be pedestrian and a rehash of many such fam coms, the audience that I saw it with laughed loudly and often. The cast is made up of beautiful, slender and athletic people with no discernible sign of America’s obesity. Everyone is attractive, well-groomed and, for Sabrina’s family, elegantly dressed and coifed, making this a romantic fantasy while dealing with class differences and wrong perceptions. “Jumping the Broom” is the kind of romantic comedy that will draw audiences out for an evenings entertainment. It is a reminiscence of the great rom coms of the 1930s like “Bringing Up Baby” and “The Philadelphia Story” where everyone is beautiful or handsome and rich. Just as in the old Depression times, many Americans are having a tough time making ends meet and an escape, even for two hours, could be the tonic that “Jumping…” can provide.