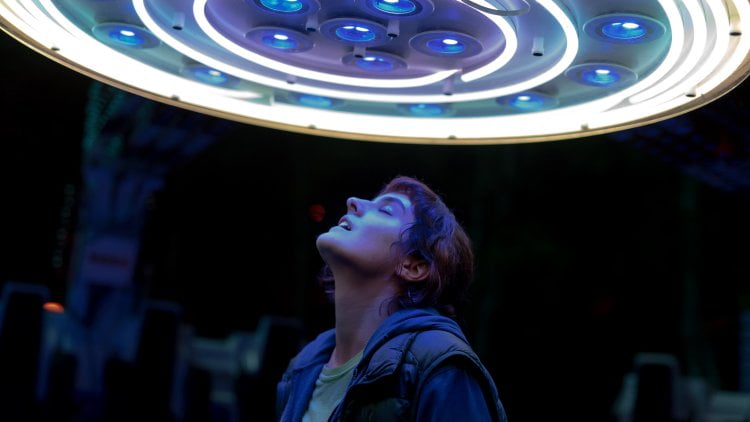 Jeanne Tantois (Noémie Merlant, "Portrait of a Lady on Fire") couldn’t be more different from her single bartending mother Margarette (Emmanuelle Bercot, "Polisse"), a sexually voracious hippie with a penchant for American kitsch.  Jeanne is quiet, dresses conservatively and spends her time in her room creating a miniature recreation of the amusement park where she works the night shift as a cleaner.  When the park’s new operations manager Marc (Bastien Bouillon) shows romantic interest in her, Margarette pushes her towards a relationship, but Jeanne has become emotionally and sexually attached to the park’s newest ride, which she calls “Jumbo.”

Belgian writer/director Zoé Wittock’s debut exhibits a great deal of craft with its stunning visuals and a sound design that will make you believe Jumbo is a sentient being, but her narrative lags behind, the story never getting beyond a conceptual phase.  Merlant gives her all as the bullied oddball bucking her inappropriate mother’s more traditional leanings, but it says a lot that the character we come to care most about is Hubert (Sam Louwyck, "Bullhead," "Cargo"), the guy Margarette picked up at her bar who is the only one sympathetic to Jeanne’s unconventional choice.

While Marc appears to try and make a real connection with Jeanne, his initial introduction, barging in on her as she changes in a locker room, creates a lingering sense of distrust with us, the audience.  Margarette, too, gets along with her daughter singing together in her AMC Gremlin, but she comes down hard when Jeanne fails to follow her agenda, so hard it almost costs her her relationship with Hubert.  Neither of these characters really makes a whole lot of sense, instead obstacles to Jeanne’s love for Jumbo.  That ignites as she polishes his red lights one night and one responds to her touch.  Soon he’s ‘giving’ her rides and communicating via whirrs and moans or red and green lights in scenes reminiscent of “Close Encounters of the Third Kind.”  When he begins to stream oil, Jeanne disappears into an erotic fantasy which finds her writhing on a white background, her limbs disappearing into black pools like the men seduced by another alien in “Under the Skin.”

Wittock based her script on the true story of an Olympic Gold medalist in archery who wed the Eiffel Tower back in 2004 and while we can appreciate her stated goal of exploring different kinds of love, specifically objectophilia or the attraction to inanimate objects, she never succeeds in getting us into Jeanne’s head.  The film is undeniably beautiful though.  We may not understand Jeanne but through lighting, camera angles and sound Wittock’s made a hulking piece of machinery sensual.