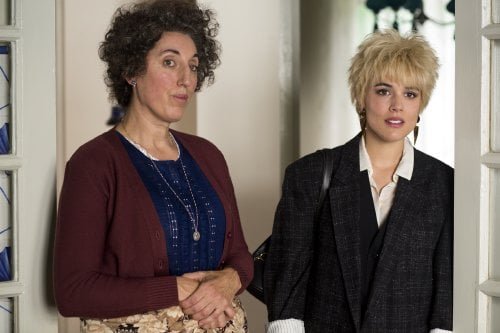 A middle aged woman living in Madrid is planning on moving to Portugal with her lover, Lorenzo (Darío Grandinetti, "Talk to Her," "Wild Tales"), but a chance meeting on the street with Beatriz (Michelle Jenner) changes everything. Beatriz has just seen Antía (Blanca Parés), the daughter the woman hasn't seen in twelve years, so with no explanation to Lorenzo, she moves back to the building she abandoned when Antía left without another word to "Julieta."

After his lightweight, frothy "I'm So Excited!," writer/director Pedro Almodóvar returns with his strongest drama since "Talk to Her" and his most Hitchcockian film since "Bad Education." Jumping off from three short stories by Alice Munro, Almodóvar time shifts from 1985 to the present day while exploring the bonds between mother and child and the often unexpected finality of saying goodbye. Once in her new 'old' apartment, Julieta (Emma Suárez, "Vacas") begins to write to her daughter, telling her the things she couldn't reveal to a child all those years ago. We meet her younger self (Adriana Ugarte) on a train where she will lose one man and gain another. The young blond is put off by an older man a little too interested in conversation. She moves and meets Xoan (Daniel Grao), a married fisherman whose wife has been in a coma for years. They click, but Julieta is devastated when they make an emergency stop and she learns the harmless man she had abandoned commited suicide by throwing himself from the train. After receiving a letter from Xoan, Julieta visits him in the fishing village of Redes, but there are more women than his wife in his life. His good friend Ava (Inma Cuesta, "Blancanieves") gifts her with one of her sculptures, a bronze nude of a sittng male with terracotta glazing. The gesture is symbolic (and in a late revelation, beautifully echoed). Xoan's housekeeper Marian (Rossy de Palma, "Women on the Verge of a Nervous Breakdown") is Almodóvar's take on "Rebecca's" Mrs. Danvers, a secretive, disapproving woman who uses Julieta's guilt against her. Yet Julieta finds happiness with Xoan, marrying him and having a daughter they both dote on. Years later, after Marian discloses poisonous information, Julieta walks out on Xoan mid confrontation never expecting that she will never see him again. Julieta agrees to leave Antía, away on a children's excursion, with her new friend Bea in Madrid. When she finally gets up the nerve to pick up her daughter and give her the news, Bea convinces them to move back to the city so the two girls can remain close. When, at 18, Antía leaves for a mountain retreat, Julieta has a prophetic vision of the two men she left never to see again. Almodóvar weaves back and forth in time expertly, layering in details that coalesce to solve his central mystery. We learn things about Julieta's own relationship with her parents (Susi Sánchez, "The Skin I Live In" and Joaquín Notario) that reflects back onto her present, judgements made by herself and her daughter without the benefit of full knowledge. One of the filmmaker's most ingenious time traversing methods is his transition from Ugarte's Julieta to Suárez's, achieved by cloaking the first actress's head in a towel only to reveal the other's upon its removal, creativity trumping technology. Production design is exacting, Julieta's surroundings conveying her current state of mind. Original music by Alberto Iglesias ("I'm So Excited!") adds to the film's Hitchcockian tone. With "Julieta," Almodóvar puts one central mystery front and center, but in solving it, provides answers to questions we may not even knew we had. His wrap is lovely, hopeful yet open-ended, a realization that reverberates through generations. Grade: