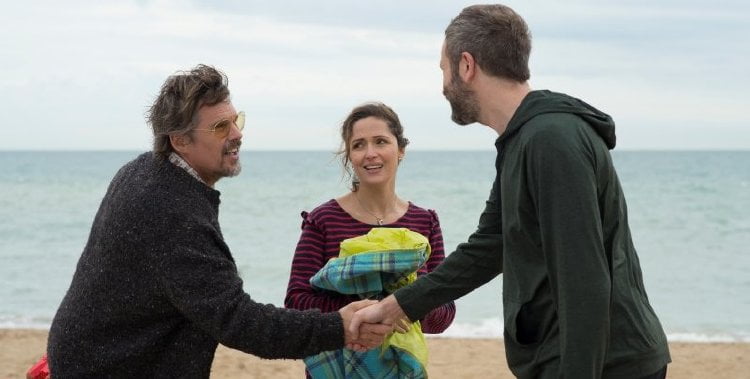 Annie (Rose Byrne) has been getting fed up with long term boyfriend Duncan (Chris O’Dowd) and his all consuming obsession with obscure American rocker Tucker Crowe (Ethan Hawke) when the proverbial straw arrives - the long lost demo of Crowe's most revered album. Duncan declares it a masterpiece on his website, but Annie's scathing review deep sixes their relationship. It also causes Tucker to reach out to her, intrigued by her insights in laying out his "Juliet, Naked."

Adaptations of Nick Hornby novels have given us such romantic comedies as "About a Boy," "High Fidelity" and "Fever Pitch." The latest (adapted by Evgenia Peretz and Jim Taylor & Tamara Jenkins), like the first two, is anchored in the music industry, and features a most amusing love triangle, that of a fortyish woman who realizes she wants a child caught between a fan boy obsessive who wants none and his reclusive, washed-up idol who has too many. This perfectly cast film (Lily Brazier, who plays Annie's sister Ros, actually looks like she could be Byrne's sister) plays to the strengths of its principals, particularly Hawke who performs both the Crowe music we hear and a live cover of The Kinks' 'Waterloo Station." Although she considered her college years studying art in London her best, Annie has resigned herself to running the oceanside town of Sandcliff's local museum, its standout attraction a shark's eye in a jar, as her dad once did. She was once buoyed by the arrival of Duncan, his job teaching film at the local college leading to lively conversations on the arts. But his real passion, running a website for an artist most have never heard of, has subsumed their lives, so much so that when she opens a demo CD sent to him and listens to it first it's considered a grand betrayal. When she points on his website that the stripped down songs are enervated, Duncan recoils into the arms of another woman, Gina, a new colleague willing to declare it a masterpiece. Meanwhile we meet American Tucker Crowe, living in the garage of his latest ex-wife's rural farmhouse spending his days tending to a garden and their 6-year-old Jackson (Azhy Robertson), a much less glamorous life than has been conjectured on Duncan's website. He's about to meet an adult English daughter, Lizzie Crowe (a luminous Ayoola Smart), he hasn't seen since she was nine and learns he is about to become a grandfather. He also emails Annie, whose initial doubt leads to him opening up. Soon the two have become quite intimate, telling each other things they've never shared. When he decides to head to London with Jackson to great his new grandchild, he suggests they meet. What follows is gentle, touching, manic, insightful and delightful. A mild heart attack inadvertently causes Annie to not only meet Tucker, but four of his children and two of his exes, if not the infamous Julie who inspired his one album. The woman who wants a child bonds sweetly with Jackson, but retreats in the face of so much family. Then Tucker suggests he and Jackson come to Sandcliff. Despite being in the final throes of preparing a special 'Summer of '64' museum exhibit, Annie nervously agrees. Then they run into Duncan. The standard love triange is given depth by its two opposing male perspectives on children, Tucker making up for youthful mistakes with his latest while trying to forge new relationships with those previously ignored, not always successfully. Add another layer between these two men by the opposing outlooks of fan and artist and the new cache given an old lover by interest from the latter. That the tale mostly plays out in a tourist town past its prime gives the whole a melancholy sense of regret, nostalgia and possibility. Director Jesse Peretz ("Our Idiot Brother," HBO's 'Girls') keeps the comedy relatable, allowing his fine cast to drive the vehicle with character. Rose Byrne has exhibited formidable comedy chops and here she turns the volume down just enough to keep Annie real. We witness her frustration in dreams cut short by one man's refusal to grow up and the hopeful caution with which she approaches another under achiever. Hawke is wonderful as a man at a crossroads, admitting past mistakes and making up for lost time (his performances of original songs by Robyn Hitchcock, Ryan Adams and Conor Mullen Oberst live up to niche fandom). O'Dowd has perhaps the most difficult role and he nails it, his geekboy passion recognizable. He's tremendously sympathetic as he finds himself on the outside looking in to a world he believed he ruled. Robertson is adorable, Smart compelling and Brazier a nice foil as Annie's lesbian sister looking for love in a backwater. "Juliet, Naked" begins with Duncan streaming live on his site, and so it ends over the credits, with his hilarious take on Crowe's surprise new album. Grade: