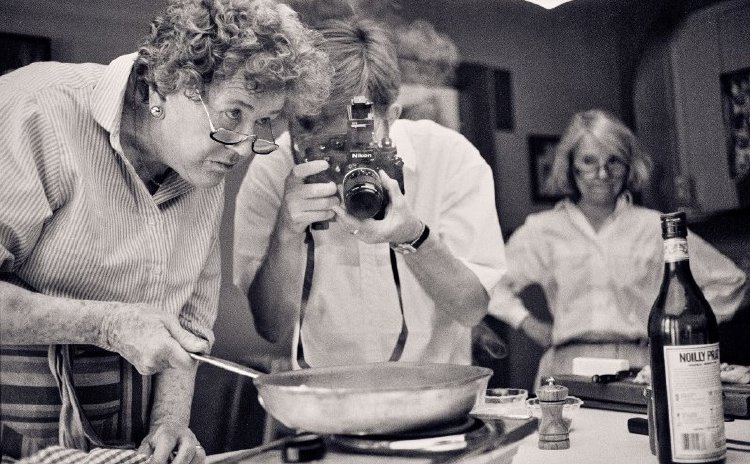 The daughter of a wealthy, Republican businessman in Pasadena knew she wasn’t cut out for life as a wife to such a man, a woman spending her days playing tennis (‘I would have become an alcoholic.’)  But it wasn’t until she volunteered during WWII, becoming a clerk/typist for CIA forerunner OSS, that her eyes were opened to other possibilities, specifically through the eyes of the man who would become her husband, Paul Child.  When he was transferred to Paris after the war, the newlywed couple indulged in all it had to offer, including food and wine, and a Cordon Bleu education funded by a GI bill was followed by twelve years collaborating on a French cookbook for American households.  When it was published, she was invited onto a small PBS book review show and requested that a hot plate be made available.  History was made and there was no stopping “Julia.”

"RBG" directors Julie Cohen and Betsy West take on another American female icon who helped shape American culture in a thorough biographical documentary that makes its case for Julia Child’s incredible influence on American cooking by reminding us what we were eating before she hit the airwaves.  (For those who don’t remember, it wasn’t pretty – TV dinners, Jell-o molds with marshmallows – such ‘exotic’ foods as artichokes and asparagus virtually unknown.)  This unusual woman - broad shouldered, towering over most at 6’3”, her transatlantic accent rising into crescendos – became a sensation by demonstrating the cooking of a French omelet in an omelet pan, a piece of cookware unknown in early 60’s Boston.  Boston’s scrappy PBS station, WHDH, decided to take a gamble on a few cooking specials, a bet that paid off well.  Not only did Julia Child revolutionize the way America ate, but she was instrumental in the growth of public broadcasting and television chefery.

Child fans may not learn much new here, but those with only a cursory knowledge should be fascinated and even those revisiting her history will be entertained.  Paul Child comes under the microscope, not only outlining his own career, which ended controversially, but in how he came across to others, not always favorably.  Yet he was ahead of his time in supporting his wife’s endeavors and the couple clearly adored each other (I would see them occasionally strolling through Harvard Yard arm in arm).  One friend notes that the elaborate lunches Julia prepared for him after spending her morning at Cordon Bleu were inevitably followed by bed, an anecdote accompanied by one of Paul’s photographs of her – in the nude (tasteful, but revelatory).  Most amusingly, their early writings detail some negative impressions – he thought her hysterical giggling annoying and she didn’t find him at all attractive – but they clearly got right onto each other’s wavelength.

Child’s relationship with her ‘Mastering the Art of French Cooking’ coauthor Simone Beck (‘Simca’) reveals two strong-minded women collaborating arduously via type written letters, Beck having become bitter when it was Julia who landed the spotlight (and, subsequently, demanded more profit).  Neither of them was known in France.  Cohen and West also chart the difficulties of the early days of ‘The French Chef,’ where editing wasn’t an option, requiring well choreographed long takes where Julia worked any mistakes right into the show.  In fact, this was part of her appeal – by concentrating on technique and sometimes failing herself, Child made elaborate recipes appear approachable to the home cook.  One illustration of her appeal shows Julia going ‘yurp, yurp, yurp’ to demonstrate the sound gravy should make when it’s done.   And if you’ve ever wondered, she adored Dan Aykroyd’s infamous SNL parody sketch, frequently pulling out the videotape to entertain guests.

Julia Child. I think I would be hard pressed to find an adult American of my generation who is not familiar with that name, at least a little. Co-directors Julie Cohen and Betsy West do their best to tell us the complete, soup to nuts, story of the life of “Julia.”

I think that anyone who grew up in the 1950s probably saw at least one episode (and probably many more if you are like me) of “The French Chef.” But that is not the beginning of Julia’s story. It begins with a young Julia living a pampered, unfocused life as she attends and graduates Smith College. Then, WWII broke out and, against the will of her ultra-conservative father, she joined the OSS (the predecessor of the CIA) as a secretary. This is when get to Julia’s real story, the one of the lady we all came to love.

This wonderful little biography begins with Julia showing how to prepare a chicken – to Jimmy Hendrix’s “Fire.” This sets the mirthful tone in telling the story of Julia Child and her long and colorful life. It also brought to mind one of her most famous line: “It tastes just as good this way!”

While the filmmakers use, sparingly, talking head interviews with the likes of chef Jose Andres and Marcus Samuelsson, this is all Julia’s show, from start to finish. Her long and colorful life gives shrift to those around her, too, from her long and loving marriage to the always supportive Paul and creating the book that put French food on the American culinary table (Mastering the Art of French Cooking) in 1963, to her long tenure on PBS with “The French Chef” and beyond.

Of course, the reason you sit down to watch “Julia” is to watch Julia. To this end, the filmmakers give us volumes on her life that tells her story about as thoroughly as I could expect, and I expected a lot. It is like all the pieces of Julia life are brought together in one wonderful recipe.