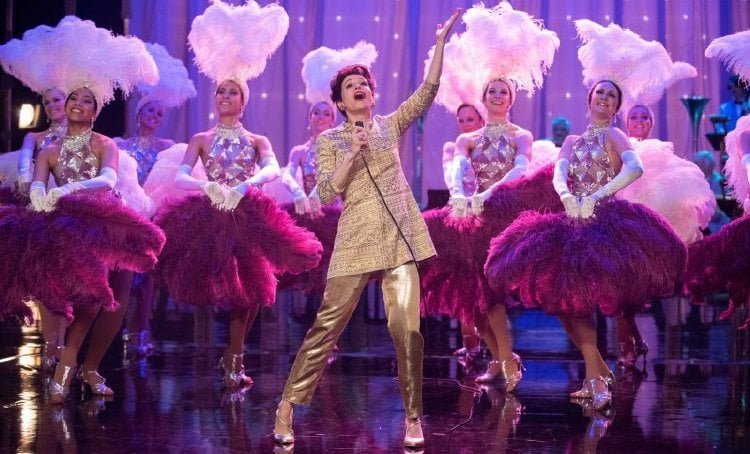 In 1968, Judy Garland (Renée Zellweger) was in debt and essentially homeless, reduced to making appearances with her young children Lorna (Bella Ramsey) and Joey (Lewin Lloyd) for a couple hundred dollars. When her ex-husband Sid Luft (Rufus Sewell) began pushing for custody of his kids, Garland agreed to perform a five-week engagement at London's swanky supper club The Talk of the Town to make enough money to return and provide a home, but nothing was ever easy for "Judy."

After appearing in movies since the age of twenty-four, Renée Zellweger has found the role of a lifetime at the age of fifty and she makes magic with it. Tackling one of the most troubled yet beloved stars in Hollywood history, Zellweger manages the feat of disappearing into the role without entirely shedding her own unique characteristics. Her Judy is not an impersonation, but Zellweger melds Garland's vibrato, timber and tics, her phrasing and vocal power and her quirky physicality into a show-stopping performance.

Adapted from Peter Quilter's stage play 'End of the Rainbow' by 'The Crown's' Tom Edge, "Judy" follows the modern biopic approach of concentrating on a specific point in time. But the young Judy Garland (wide-eyed newcomer Darci Shaw) is represented in flashbacks illustrating the geneses of her addiction problems at the hands of the psychologically abusive Louis B. Mayer (Richard Cordery, channeling Russell Crowe playing Roger Ailes) and the loneliness created by a pretend adolescence whipped up by the studio, both regimented by a cold-hearted publicist (Lucy Russell). It's a smart way to cover Garland's "Wizard of Oz" and Mickey Rooney (Gus Barry) period while allowing the past to comment upon the present.

After accepting an envelope with $150 in cash, Garland cabs her kids to their hotel only to discover their suite has been released because of nonpayment. By the time they arrive at Luft's, her cash is almost gone and her ex is none too pleased with her middle-of-the-night arrival. She heads out to a house party, connecting with older daughter Liza Minnelli (Gemma-Leah Devereux, poorly cast and thoroughly unconvincing), but hooking up with the stranger, Mickey Deans ('American Horror Story's' Finn Wittrock), who brings her a cocktail.

Judy is received with a lot of fanfare in London where she is greeted by club owner Bernard Delfont (Michael Gambon) and handler Rosalyn Wilder (Jessie Buckley). And Wilder will indeed have her hands full, Judy resisting rehearsal with bandleader Burt Rhodes (Royce Pierreson) the very next day. On opening night, stage fright sends her to the bottle, Rosalyn barging into Garland's hotel room to pour her into a gown, then quite literally pushing her on stage. Judy proceeds to bring the house down opening with 'By Myself,' but her residency won't always go as smoothly, the star eventually replaced by Britain's 'King of Skiffle,' Lonnie Donegan (John Dagleish), after one too many drunken episodes.

Director Rupert Goold ("True Story") cycles through Judy's performances, the offstage sleeplessness formed by the studio mandated uppers and downers used to control her weight that drives her to pills and booze, the loneliness wrought by her isolation and children's absence and flash backs to romantic hopes (Rooney) and rebelliousness (a 16th birthday party swim) dashed. Judy's habit of making friends at West End bars is fictionalized with backdoor gay fans Dan (Andy Nyman) and Stan (Daniel Cerqueira), overcome when their idol invites herself to dine with them (they'll have a touching moment in the film's finale).

Buckley, who had her own singing-centric film earlier this year ("Wild Rose"), is used as perspective on everything that was great and everything that was frustrating about Judy Garland in the waning days of her career. The woman was thoroughly unpredictable, frail and needy, yet big-hearted and still capable of greatness. It is noteworthy that two of the three people most impacted by Garland's chaos, Rosalyn and Burt, would take her out for goodbye cake and champagne (Zellweger's tentative enjoyment of a slice of cake is heartbreaking, her childlike declaration 'It's good!' reflecting years of denial). Equally telling is that the man with the most to gain, Donegan, acquiesces to her request to take the stage one last time after her firing. Deans' surprise arrival sums up Garland's desperate need to be taken care of, his scheme of lending her name to a theater chain for financial emancipation met with a proposal. He would become her fifth husband, only to immediately disappoint.

If Goold's film feels a little small for its outsize subject, Zellweger's performance is not contained nor restrained by it. She's a marvel and her "Judy" will inspire both cheers and tears.

In 1969, Judy Garland (Renee Zellweger) was near the end of her too short 47-year life. But, always the showman, she left her tiny family in LA and trekked to London for a four week booking that she hoped would revive her stagnant career in “Judy.”

My first takeaway as I watched Renee Zellweger as the iconic star was I was watching that iconic star. Zellweger’s performance (with phenomenal makeup) is breath-taking in her believability, singing Garland’s songs with just the right tone to the singer-movie-star with her tired but still-vibrant voice.

The story takes place as Judy, with her two kids, Lorna (Bella Ramsey) and Joe, in tow, learns that she is too far in arrears at her LA hotel and must leave - immediately. The former movie star is so broke she goes to her ex-husband Sid Luft for help but he, like most others, has had it with Judy’s erratic behavior and refuse to bail her out yet again.

With few, if any, options, she accepts the London gig. Director Rupert Gould uses the compact time period – just a month – to show us the life, with all of its flaws and foibles, of a woman who, to this day, is still a music icon. (Just a side note: there have been four versions of “A Star Is Born,” using that title, beginning in 1937. Judy’s 1953 version is by far the best.)

This, to me though others may argue, is the best ever performance by Renee Zellweger. It is like the actress has spent her entire career just preparing for this splendid recreation and interpretation of the star and her later life. Her intense study of Garland during her final days is obvious in every aspect of Zellweger’s performance as Judy.

Renee is so compelling and riveting in her portrayal that the background characters, though well played by all, never get the chance to shine, overshadowed by the film’s star. Jessie Buckley, as Judy’s assistant/keeper, Rosalyn, Michael Gambon as the Brit promoter, Bernard, Rufus Sewell as Sid Luft and Finn Wittrock as Judy’s last husband, Mickey Dean, are fine in their roles but cannot compete with the Zellweger’s star power.

Though I am dazzled by Zellweger and her stellar performance, beneath that shine is a solid biopic that puts Judy’s finale up there with other period biographies. And, Zellweger did her own singing – and has a first album coming out soon of those songs.