Judy Moody and the NOT Bummer Summer 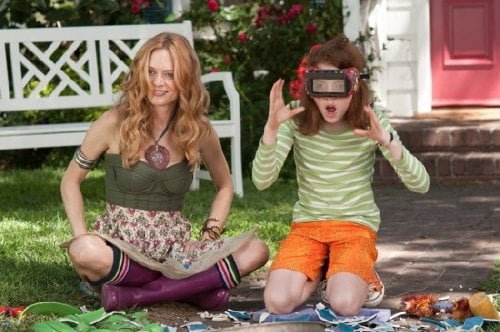 Judy Moody's (Jordana Beatty) been looking forward to tons of her excitement with her best friends. Then she finds out that they are both heading off to adventures of their own...and her parents inform her that they're leaving for California...and she's to stay home with little brother Stink (Parris Mosteller, TV's 'Worst Week') under the care of her Aunt Opal (Heather Graham, "The Hangover"). But Judy is surprised to find a kindred spirit in her Aunt and decides to carry on with her plans for a thrill point summer in "Judy Moody and the NOT Bummer Summer."

Here's this summer's beloved children's book series (from Megan McDonald) adapted for the screen and it bears a lot in common with last year's "Ramona and Beezus" if those characters had ADD and were a little less goody-two-shoes. Director John Schultz ("Aliens in the Attic") uses a visual style dialed to 11, cramming every frame with bright colors, animated squiggles, glitter, subtitled singalongs, split screens, overlays, pop-ups and creatures great and small to make sure kids won't be bored for a second and he accomplishes what he aims for. Parents shouldn't mind the sit and should also note that despite the girl's name in the title, there is plenty, including Stink's throughline hunt for Bigfoot, to keep boys entertained as well. Jordana Beatty's made up to look like an unmade bed with her unbrushed hair and wardrobes consisting of pajama bottoms paired with t-shirts and flip flops. Her Judy's uber competitive, so when Rocky (Garrett Ryan, TV's 'Young and the Restless') goes off to circus camp and Amy (Taylar Hender) to Borneo, she decides to have a race based on thrill points. But while Rocky walks tightropes and Amy swims with whale sharks, Judy's stuck with Frank Who-Eats-Paste Pearl (Preston Bailey, Showtime's 'Dexter') who throws up on the roller coaster, falls off the tightrope and exits a Creature Double Feature screaming. At the last minute, Judy tries to hog Stink's spotlight when the local news comes to interview him about his expertise in local Bigfoot sightings. Then there's Aunt Opal. Heather Graham's career has lost its "Drugstore Cowboy"/"Boogie Nights" edge. Now, even in fare like "The Hangover," she's the wide-eyed optimist, and, like Ramona's Aunt Bea, the clear forerunner of her niece. Opal's a 'guerilla artist' who has traveled the world with no visible means of support and the driving skills of a chimpanzee ("Judy Moody" does not set a good example on driving safety - not only Opal but the Bigfoot hunting Burnsteins drive like escaped criminals). But she's enthusiastic and on the same wave length as the kids so it's hot dog tangerine and Lucky Charm fondue for dinner and plaster of paris projects that destroy the living room time. Again, not exactly a responsible role model, but a creatively supportive one. Dad (Kristoffer Winters, "Fair Game") and Mom (Janet Varney) are calm, cartoony versions of their offspring and, as most of the books are set in Judy's school, her teacher Mr. Todd (Jaleel White, TV's 'Fake It Til You Make It') has a rather obvious, 'mystery' throughline for summer vacation (probably to make the kids in the audience feel smart). White's Todd is odd - he surprises with a high pitched voice that doesn't match his appearance, then pulls out a banjo for a classroom singalong - but the teacher's also Opal's parallel and is a good example of how a teacher can get kids engaged in class. "Judy Moody and the NOT Bummer Summer" kind of dribbles away at the end like a melting ice cream cone. All the friends reconnect, all slights are forgiven, the 'race' apparently forgotten and that last 'thrill' underwhelming as the film's climax. Still, Judy's learned she can still have adventures in her own backyard and for a film this hyperactive, it mostly avoids being shrill. Schultz is always throwing something out there to keep the eye engaged.