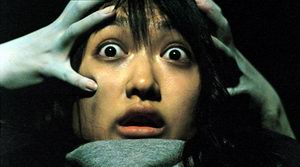 A social worker, a husband, his sister, a detective and a schoolgirl all experience the haunting of the Tokunaga house in "Ju-On: The Grudge."

Director Takashi Shimizu, who has also directed the upcoming American remake as well as the original television movies that initiated the "Ju-On" series offers a tantalizing six chapter perspective of a haunting. The chapters jump across timelines and fold in upon themselves, making "Ju-On: The Grudge" a creepy puzzle. With startling use of simple devices like makeup, sound, editing and camera movement, Shimizu raises goosebumps, from a pale blue boy's catlike howl to his unnoticed presence on every floor an elevator cage passes. The technology of "Ringu" continues its presence with disquieting cellphone clicks and inky ghostly images appearing on security monitors. The director harkens back to German Expressionism with his composition of one shot, in which a pale, wide-eyed woman is bookended with figures perched like gargoyles. In another, he borrows the infamous 'spider walk' excised from the original "Exorcist" far more effectively than that film's prequel does. Cinematographer Tokusho Kikumura's ("Chaos") lighting of Kanji Tsuda ("The Blind Swordsman: Zatoichi") combined with the actor's control over a changing facial expression nails the titular transformation in the character of Katsuya Tokunaga. Shimizu's eerie use of bent time frames gives added weight to the sight of a missing poster or the timing of a phone call, but it can also be frustrating. Unless the viewer has the patience and time for multiple viewings, "Ju-On: The Grudge" appears to dispense with sense, but it never lets up on the chills.

A pretty volunteer social worker, Rika (Megumi Okini), is sent on her own to a job that really requires someone with more experience. She arrives at her assignment, a pleasant-looking house, only to find an uncommunicative old woman who appears to be possessed. She begins cleaning the slovenly household until she hears a noise upstairs. When she investigates, Rika finds a spooky looking young boy hiding in the closet. What she doesn’t know, yet, that the house is the center of evil in “Ju-on: The Grudge.” Writer/Director Takashi Shimizu has garnered quite a following in Japan with his “Ju-on” horror movie franchise, starting with “Ju-on: the Curse” in 2000. The auteur is currently in post-production with an American remake of his third installment, “Ju-on: the Grudge.” It is going to be interesting to see if Shimizu can maintain the creep factor that he has delivered in this interesting, whirlwind of a horror movie. The main character in “Ju-on: the Grudge” is the humble house that Rika is sent to at the beginning. There is something rotten in the white-collar neighborhood habitat that manifests itself as the film’s timeline shifts and we see a young, recently married couple moving into their new home. What we soon learn is there is a palpable evil lurking there and everyone who enters brings a bit of the darkness out with them. Soon, the evil is invading places beyond the house and the death toll mounts. I was often confused with “Ju-on” as Shimizu jumps around on the timeline, presenting a character and then, later, shifting to an earlier moment in that person’s life. If you pay attention, things will make sense but this is not important to the horror story’s fabric. Infused throughout the film are startling images, like the frightening visage of the little boy whose phantasmagoric aura appears repeatedly, that haunt the living. There is much about “Ju-on: the Grudge,” to creep out the fans of horror flicks, particularly Japanese horror, but not much audience appeal beyond. I wonder if the director’s American debut will have the same curiosity afforded to “The Ring,” adapted from the Japanese “Ringu.” Ju-on’s” non-linear storytelling style requires your attention but the constant creepiness is maintained right to the end. It does what a horror movie is supposed to do – scare you!