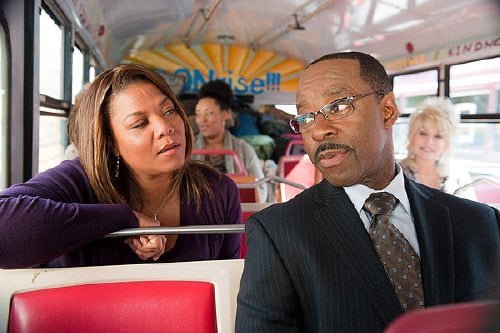 It's hard to know where to begin with this awful, mess of a movie that not even the beloved and charismatic Dolly Parton and Queen Latifah can save (in fact, they are both upstaged by the far lesser known young'uns who play their daughter and grandson). Back in 2003, writer/director Todd Graff turned out the flawed but charming "Camp." Since then, there's only been 2009's "Bandslam," which didn't cause a ripple, but with his latest Graff's made one big belly flop. Beginning with a conflict that's so contrived it requires a food fight to shore it up, "Joyful Noise" seems to have been assembled at random and will have even their admirers cursing the likes of the 'American Idols' and 'Glees' which have birthed movies like this. TV's 'Community' delivered a Christmas gift with their hilarious 'Glee' parody while this earnest sop is a post holiday lump of coal. The first thing we notice is how the weathered, sucked-in cheeks of Kris Kristofferson match those of Parton, playing his wife. He's out of the picture before the opening credit roll completes, only to reappear in a poorly staged fantasy duet later on. Meanwhile his wife is delivered a blow immediately after his funeral by their caring Baptist minister (Graff leans heavily on the Christian values except when he needs a cheap laugh). Vi was Bernie's second-in-command so it stand to reason she'd assume his job even though there's no apparent reason for her and G.G.'s animosity. That heats up when G.G.'s grandson Randy (newcomer Jeremy Jordan, developing some real melodic chemistry with Keke Palmer), a New Yorker with a troubled history, begins to woo Olivia Hill (Keke Palmer, "Akeelah and the Bee"), Vi's goodie two shoes daughter and lead soloist. But Graff's idea of creating a hoodlum is to have the kid be polite, charming and the only guy who takes an interest in Vi's son Walter (Dexter Darden), an Asperger's kid who gets bullied at school. (We know Walter has Asperger's because he acts like Ray Charles.) Randy's so bad, in fact, that he charms romantic rival Manny (Paul Woolfolk) into the choirs' band to give the kid a shot at the big time before their trip to LA. A subplot about choir member Earla (Angela Grovey) sex life is embarrassingly bad, even for a sitcom. Vi's marital problems with Marcus (Jesse L. Martin, TV's 'Law & Order,' "Rent"), who's 'away in the Army for two years' but suddenly close enough that Randy can drive to his base, is padding. They all live in Pacashau, Georgia, a town so depressed it has a TV and video repair store in its center. Graff repeatedly hits on the bad economy merely to give the choir's competition outcome more meaning. In one of the film's non sequitur inserts, we see a choir member and his dad facing the closure of their hardware store, but when the singers' bus returns and in the one-year-later coda, everyone's rejoicing. Graff also makes some weird stylistic choices, like throwing in a one-of-a-kind shaky cam shared memory and using jump cuts for a nighttime overhead shot of a travelling bus. There are plenty of musical numbers, of course, from the ubiquitous Michael Jackson number 'Man in the Mirror' to the less expected 'Walk Away Renee' and 'I'm in Love with a Stripper.' Oddly, Parton never gets a solo with the choir until the big climatic unplanned but perfectly arranged and choreographed final competition number. The movie's only real highlights are between Palmer and Jordan, who do a righteous 'Maybe I'm Amazed.'