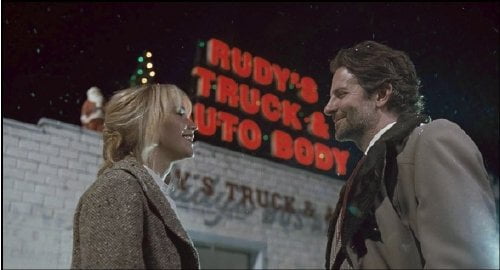 As we watch from overhead, a little girl twirls in the snow. Her grandmother Mimi (Diane Ladd) believes in this grandchild, predicting that she will do great things and become the family matriarch. But while Mimi is eventually proven correct, the road ahead will be a rocky one for "Joy."

Loosely based on the story of Joy Mangano, the woman who built an empire from her idea for the Miracle Mop, writer/director David O. Russell's ("Silver Linings Playbook") "Joy" is intended to chart the course of a woman who loves and feels responsible for her family while finding the grit to succeed in the cut throat business world. But Russell's resulting film fails to get to the heart of just why Joy (Jennifer Lawrence) continues to be so supportive, the family members surrounding her drawn so negatively they're repellent. It is difficult to embrace a character who so frequently comes across as a doormat, no matter that she ultimately triumphs. The decades long scope of the film becomes unwieldy with what feels like an hour of story telling crammed into its final minutes. "Joy" feels like a work in progress. The film has an interesting structure, beginning by plopping us into the midst of a (fictional) black and white soap opera (Russell returns to the device as the years go by, employing Susan Lucci as his lead). This is the world Joy's divorced mom Terry (Virginia Madsen) lives through, rarely leaving her bed. Joy is also a divorced mom of two, working as an airline clerk to support not only the three generations sharing her home, but the ex-husband, small time singer Tony Miranne (Édgar Ramírez, excellent), who lives in their basement. Then she gets a call from her dad, Rudy (Robert De Niro), who's just been thrown out by his latest girlfriend. Everyone makes demands on Joy, who does the books for dad's auto body shop next door and pulls up floorboards when the plumbing leaks. But it is Joy's commitment to solving problems and cleaning up messes that sparks her breakthrough after cutting her hand on glass while wringing out a mop. Joy's solution begins life as a cottage industry in dad's shop, then takes on a bigger life when Tony uses an old connection to get Joy an interview with the new television shopping phenomenon QVC. A first attempt at selling her mop is a disaster. Then Joy steps onto the stage herself and her homey pitch takes sales through the roof. But that's not the end of the story as Joy must deal with shady manufacturers, her jealous half-sister Peggy (Elisabeth Röhm, TV's 'Law & Order') and her investor, dad's new Italian girlfriend Trudy (the perfectly cast Isabella Rossellini), dogging her every move. Russell takes pains to keep his film visually inventive. Locations alone move from that blue collar home to a fancy sailing boat to manufacturing spaces to a shooting range to the almost surreal QVC operation where stages rotate before the cameras like Disney's Carousel of Progress. Joy's confrontation with the man who claims to hold her patent is staged like a Western. The film's soundtrack is also packed with bold choices, including Lawrence and Ramirez taking on the Frank and Nancy Sinatra classic 'Something Stupid.' Lawrence is rock solid in the role, submissive, hectic, maternal (although Joy's oft-mentioned second child disappears from the screen early on), diplomatic, tentative, persuasive, confident and steely. But other than Ramírez, who traverses from romantic to deadbeat in flashbacks, his ex's most steadfast champion in present, and Rossellini's comical insecurity, supporting players fail to make a mark. As QVC's show runner, Bradley Cooper seems miscast. Melissa Rivers provides a startling impersonation of her mother. "Joy" is a far more ambitious film than the standard biopic, but its flaws are frustrating. Grade: