Journey to the Center of the Earth 3D 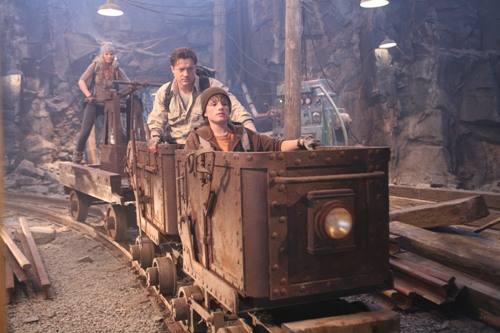 Scientist Trevor Anderson is stuck “babysitting” his 14-year old nephew Sean (Josh Hutcherson) for the next 10 days. Neither is happy with the prospect but Sean’s mom also leaves Trevor a package. In it are the possessions left by his long-missing explorer/adventurer brother, including an intriguing and much-annotated copy of Jules Verne’s “Journey to the Center of the Earth.”

Brendan Frasier has proven himself a more than capable actor in films such as "Gods and Monsters" and "The Quiet American," so why does he continue his series of stilted, Disney-type heroes? From the admittedly amusing "George of the Jungle" to the unfunny "Dudley Doright" and "The Mummy" films, it's as if he's parodying himself. In fact, this approach would have been so right for "Superman" one wonders why he was passed by. In "Journey to the Center of the Earth 3D," Frasier offers up another of his socially awkward, fine upstanding types suddenly saddled with nephew Sean (Josh Hutcherson, "Zathura: A Space Adventure," "Bridge to Terabithia") whom he hasn't seen in years. Trevor Anderson (Frasier) is a scientist whose twin brother, a 'Vernian,' disappeared years ago. When a legendary hot spot appears on his radar and happens to be the site his brother was investigating, Trevor throws federal kidnapping charges to the winds and takes Sean on a hastily arranged journey. With local guide Hannah Ásgeirsson (Anita Briem, ShoTime's "The Tudors"), who also happens to be a babe, Trevor and his nephew find themselves on a "Journey to the Center of the Earth." The film, a modernization of the Jules Verne classic, never feels like a movie, but an amusement ride. Various threats are trotted out in 3D (after a series of gross out earlier moments, like a bathroom sink hole view of Frasier brushing his teeth) as the temperature rises and the clock ticks. An abandoned mine provides an opportunity for a 3D rollercoaster ride that could be ripped from many a park, dinosaurs have been done better. For a movie that must create a whole new world, there's no sense of or wonderment. "Journey to the Center of the Earth 3D" is product pure and simple, a place to park the kids for a couple of hours. On the plus side, of its ilk it is a cut above the abysmal "The Adventures of Sharkboy and Lavagirl 3-D" Robert Rodriguez ("Sin City," "Grindhouse") foisted on us a few years ago.

My earliest memory of the movie, “Jules Verne’s Journey to the Center of the Earth” is when, as an eight-year old boy, me and my friends (The Gang we used to call ourselves) went to the old Fenway Theater in downtown Medford Square (MA) for the opening matinee. James Mason, as expedition leader Sir Oliver Lindenbrook, Pat Boone, as adventurer Alec McKuen, requisite babes Jenny Lindenbrook (Diane Baker) and Carla Goteborg (Arlene Dahl) and Gertrude the duck make the harrowing journey to the titular destination. It was a lavish, big-budget 1959 Hollywood F/X flick that was perfect for us kids. (I still enjoy it, today.) This latest update of “Journey to the Center of the Earth” begs the question: Why? Well, for the flashy 3D effects, I guess, but this is not nearly enough of an attraction for this pared down-to-the-bone adaptation of Jules Verne’s exciting novel. The result is an extended theme park ride as we fly down the tracks of an underground mining rail or hurtle up from the guts of the earth atop a geyser. The rest of the film simply marks time until we get to the next ride. Trevor forgot about Sean’s planned visit and is not prepared to deal with a sullen teenager for over than a week. But, when he goes through his long lost brother’s volume of the Jules Verne classic, he soon discovers that the novel may, in fact, be a non-fiction work. Armed with many years of saved change, uncle and nephew depart for Iceland to see if it is true. They hire a pretty mountain guide, Hannah (Anita Briem), to take them to the spot described in the book but a violent lightning storm traps them in a cave. The only way is down into the bowels of the earth and they find out, quickly, that Trevor’s brother was right. The adventure begins. This is meat-and-potatoes, no frills (and manufactured thrills) filmmaking whose only reason for being is to capitalize on the latest 3D technology. The story, which consists of linking the aforementioned theme park rides, is simple action adventure with our heroes getting into, and out of, one jam after another. The actors, like us, are there for the ride and Fraser, Briem and Hutcherson are denied anything even approaching depth of character from the script by Michael Weiss, Jennifer Flackett and Mark Levin. First time feature helmer Eric Brevig appears to be marching to orders from above to focus on the 3D rather than creating a modern adaptation of a classic book. Techs are OK but the film is overshadowed by a gimmick. If you are a fan of 3D movies then, by all means, spend your money and see it at the theater. IMAX would be better. But, if you are really looking for an entertaing film version of the Verne classic, get hold of a copy of the 1959 “JttCotE.” It is more fun and it has a duck, too.