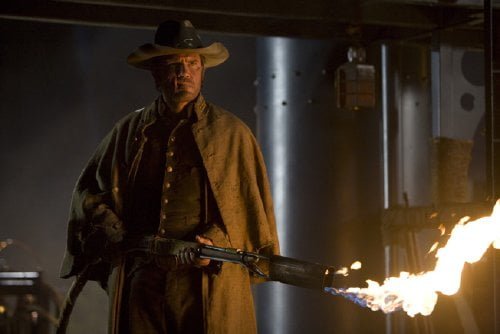 DC Comics, once again, takes one of its many graphic character magazines and attempts, again, to capitalize on fanboy interest in things violent. It’s the end of the American Civil War and fighting at the Border States grows ugly and personal. Confederate soldier Hex (Josh Brolin), in the line of duty, wiped out the family of a powerful local tyrant in a bitter fight. He pays for his deed when his nemesis, Quentin Turnbull (John Malkovich), returns the favor, killing the rebel’s family before his eyes, and then leaving the man for dead. Big mistake when the soldier returns from the grave as “Jonah Hex.”

What can you say about a film where John Malkovich can't work up any enthusiasm for playing a villain? This weird cross between "The Wild, Wild West" and "The Crow" actually has some glimmers of inspiration here and there and a couple of scenes, like its bang-up prologue, which actually work, but for every nice visual (Jonah rising from red clay) or idea (a dead interview subject decomposing and reconstituting between punches) there are many more bad ones. Michael Wilkinson's costuming shows some nice period authenticity, but the makeup used for Jonah's facial scar goes too far with a tending stretching from his nose to lower lip, a distraction that never appears natural. Megan Fox's character adds nothing to the proceedings, nor does the actress - we get more personality from Hex's non-speaking wife, seen only in a flashback which recalls "Jeremiah Johnson." The topical terrorist plot doesn't give enough motivation to its orchestrator. And why does a film with an 80 minute run time need to resort to showing us the same scenes multiple times? Josh Brolin has been on a roll leading up to this. I hope "Jonah Hex" doesn't stop him in his tracks.

For the first 20 minutes of “Jonah Hex” I had a good time. The plot of revenge is spun out quickly and the antagonists are defined. There is a brilliant shootout – mostly bloodless in this PG-13 tome – with dark hero Hex going to battle with twin Gatling guns mounted on his horse – really. I laughed out loud at this enjoyable absurdity and settled in for more. I heard negative things about the film but figured the critics lack a sense of humor. Then, I suffered through the remaining hour of dullness and Megan Fox as the sexy hooker with a heart, Lilah. The actress defines her own brand of dullness, here. Josh Brolin plays Hex as a second rate Clint Eastwood in “Pale Rider.” Is he alive or dead? Does he have supernatural powers? If killing everyone in sight is having super powers, then Jonah has them in spades. Does evil Quentin Turnbull possess the same powers? Well, he is one bad ass mother, so I guess so. Why is Megan Fox in this film? To cancel out super powers! Oh, yeah, there is a plot of sorts. The US government has secretly developed an uber-weapon – read 19th Century nuke – that is called a “country killer.” Of course, the wicked terrorists, led by Turnbull, steal the device and threaten Washington DC. President Grant, himself, orders that Hex be enlisted to stop the madman’s plans. But, do not let this “story” influence you. It is merely a device that allows the bloodless killing spree. (Note the absence of screen blood is not the only thing bloodless in “Jonah Hex.” The whole work is anemic. Proof positive when John Malkovich walks through a bad guy role.) The large stable of writers adapting the graphic mag characters is led by sophomore director Jimmy Hayward, whose tyro film was the charming animation, “Horton Hears a Who.” “Jonah Hex” ain’t a charming anime. It is a grindingly dull western-revenge-supernatural-terrorist-save-the-world mishmash that fails on every level. Did I ask why Megan Fox is her?