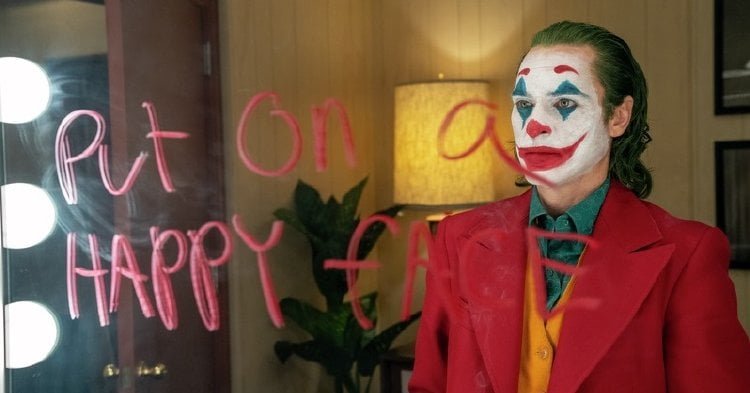 His mother may call him Happy, but despite his job as a clown, the world has made Arthur Fleck (Joaquin Phoenix) anything but. Bullied, baited and betrayed, Fleck’s psyche contorts into an echo of the cruelty which surrounds him and he evolves into a corruption named “Joker.”

Since its surprise win of the Golden Lion at the Venice Film Festival, “Joker” has been poked and prodded ahead of its release, organizations from the U.S. Military to the F.B.I. warning about potential violence at screenings, most notably from incels. But incels, or ‘involuntary celibates,’ mainly lash out with hatred of women. Arthur Fleck’s problems stem from abuse and mental illness, so a more serious issue may be the fortification of the right’s insistence on equating mental illness with gun violence in this country. Yes, he’s a sympathetic character, but I never felt it was cowriter (with “The Fighter’s” Scott Silver)/director Todd Phillips’ (“The Hangover” trilogy) intention to justify Fleck’s actions or encourage his audience to revel in them. Instead, “Joker” is a reflection of the soul sickness affecting our country right now.

Phillips has set his story in the early 80’s with Gotham City enduring a garbage strike that will recall the grimier, more dangerous New York City of the 70’s. He’s also so completely thrown out the usual Superhero tropes, instead leaning heavily on Scorsese’s “Taxi Driver” and “The King of Comedy” for inspiration (with De Niro himself taking over “King’s” Jerry Lewis part), that it is a surprise when Bruce Wayne’s family is worked into the narrative. Thomas Wayne (Brett Cullen) is running for Mayor, telling the press that he is ‘their only hope’ when speaking of the common man (sound familiar?). He is beloved by Arthur’s mom Penny (Frances Conroy), who used to work for him years ago. So why do they live in such dire circumstances?

When we first meet Arthur, he’s twirling a sandwich board for a company going out of business. A group of punks steal his sign, then beat him with it when he chases them into an alley. His boss, Hoyt (Josh Pais), says the cost must come out of his salary. His coworker, Randall (Glenn Fleshler), gives him a handgun in a paper bag for his protection. Arthur then finds out funding for his mental health appointments and the seven medications he receives at them is being cut. When his gun falls to the ground as he clowns at a children’s hospital, he loses his job. On his way home on the subway, when he sees three drunk jerks in suits harassing a young woman, his uncontrollable laughter, a Tourette’s-like tic, draws their attention to him. Gotham City will become absorbed by the clown vigilante killings of three men, the press concluding retaliation ‘against the rich.’ Meanwhile, Arthur has begun to fantasize that his neighbor (‘Atlanta’s’ Zazie Beetz) is his girlfriend and that he has a future in stand-up comedy. When late night talk show host Murray Franklin (Robert De Niro) plays a tape of his failed attempt and calls him a joker, Arthur is pushed completely over the edge.

Todd Phillips takes a huge leap forward as a director, his production plunging us into a meticulously defined world of graffiti, rats and run down spaces, the glittering environs of the wealthy always out of reach. Watch for details like Arthur’s lapel squirt flower ‘crying’ onto the ground after his beating. Jeff Groth’s editing makes the film’s punches hit harder, Arthur’s world more interior. Hildur Guðnadóttir’s (HBO’s ‘Chernobyl’) ominous, cello-based score is perfection, complemented by soundtrack selections like ‘Smile.’ If Phillip’s writing broadcasts his inspirations, so be it, as he’s refitted them to his own purpose. (Other movies besides Scorsese’s seep in, with scenes recalling the likes of “Sid and Nancy’s” floating garbage, “The Exorcist’s” stairs and even “The Dark Knight’s” hospital.) If there’s a problem with his script it is that at a certain point we know exactly where it is going and once it is there Phillips resists his natural ending.

But the film’s main asset is Phoenix’s insane tour de force, the actor projecting a tortured physique, his torso twisted and ribs projecting as he moves with a grace that can only be called balletic. His Arthur is an innocent disillusioned day by day until his mind snaps and the power of his performance is that we mourn the mentally ill, compassionate man who is lost when it does.