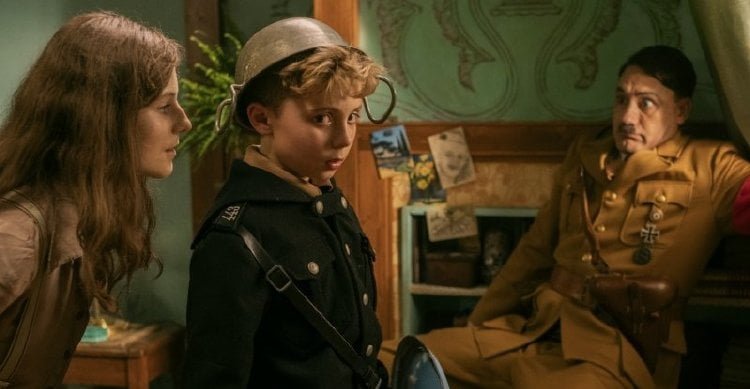 Johannes Betzler (Roman Griffin Davis) is 10-years old and a loyal member of the Nazi Hitler Youth. Unbeknownst to him, his mother, Rosie (Scarlett Johanssen), has been hiding a young Jewish girl, Elsa (Thomasin McKenzie), in their home. The boy, facing this truth-shattering dilemma, consults with his imaginary friend, Adolph Hitler (Taika Waititi), in “Jojo Rabbit.”

The day ten year-old Jojo Betzler (Roman Griffin Davis) has been anxiously anticipating finally arrives when he and his friend Yorki (Archie Yates) join the Hitler Youth under the command of Captain Klenzendorf (Sam Rockwell). Humiliated after being unable to kill a bunny, Jojo gets a pep talk from his imaginary friend Adolf (Taika Waititi) extolling that animal’s virtues. In his zeal to prove himself, Jojo ends up injured by a grenade. While he recuperates at home with his beloved mother Rosie (Scarlett Johansson), he makes a shocking discovery – she is hiding a young Jewish girl behind the walls of his deceased sister’s bedroom – and the whole world flips for “Jojo Rabbit.”

Writer/director Taika Waititi’s ("What We Do in the Shadows") adaptation of Christine Leunens' 'Caging Skies' has been dividing folks over its humorous depiction of Nazis since it premiered at the Toronto International Film Festival where it won the coveted Audience Award. Accused of everything from Nazis too buffoonish to be unlikable (‘Hogan’s Heroes’ anyone?) to not addressing contemporary concerns (which it most certainly does), Waititi’s film does, in fact, eventually inflict unimaginable pain upon its protagonist at the hands of his would-be heroes. It just does so without identifying the specific perpetrators. With everything told from Jojo’s perspective, the Fuhrer only he can see is childlike (the filmmaker, whose Jewish mother introduced him to Leunens’ novel, takes on the role himself), his rabid hatred of subhuman Jews expressed by such name-calling as ‘little female Jesse Owens Jack the Ripper.’

Jojo, who is told his father is fighting in Italy, adores his mother, whose blonde Bavarian chic draws admiring glances and, perhaps, too much attention (in actuality Rosie is part of the Resistance, as is her absent husband). She is the perfect mother, creating a magical world for the son she knows still lives within the brainwashed Nazi obsessive (yet firmly insisting he look upon civilians hanging in their town square, stating ‘they did what they could’) while inspiring Elsa (Thomasin McKenzie, "Leave No Trace"), a clear stand-in for her lost daughter Inge. Rosie’s guidance is firm but gentle, ever aware that a slip that they are anything but a loyal household would prove disastrous. She uses humor and imagination to bring up her boy, creating a beard from fireplace ash to pretend at being his father, lacing his shoes together to encourage him to get over that particular block.

Jojo and Yorki’s time with Klenzendorf, whose uncharacterically disheveled appearance signals his knowledge of exactly how well his war is going, will remind many of Wes Anderson’s “Moonrise Kingdom,” but his time at home is a contest for his soul. If at first his relationship with Elsa is contentious (she steals his precious Hitler Youth knife, he rights callous break up letters from her fiancé), the sound of her weeping behind the wall makes him turn tender and her drawing of a Jewish goddess makes its way into his cartoonish ‘research book’ YooHoo Jude in direct confrontation of his animalistic Nazi renditions.

When Gestapo agent Deertz (Stephen Merchant) comes calling, he and his goons ridiculously prolonged and formal rounds of ‘Heil!’ recall MAGA indoctrination chants of ‘Build the wall!’ and ‘Lock her up!,’ the mindless call and response of mob rule. Waititi uses animals as symbols throughout, German shepherds signifying the literal mindedness of a nation, the rabbit recalled in Rosie’s shoe lacing, butterflies leading Jojo to the two women in his life with hugely contrasting results.

As Allies approach from all sides, Jojo witnesses the sham of everything he once believed in. Waititi allows Klenzendorf a grace note some may find overly sentimental, but the man’s cynicism in his cause has been evident from the start. The film which begins with the Beatles German language version of ‘I Want To Hold Your Hand,’ an ironic accompaniment to Nazi salutes, ends with Elsa fulfilling the dream she’d shared with Rosie as David Bowie sings ‘Werden wir Helden für einen Tag.’

I knew, going in to “Jojo Rabbit,” what the story is about (see above). What I did not expect is a richly dark satire, a happy/sad tale of boyhood, a coming-of-age story and one about a mother and son and their love for each other. That is a lot of stuff for what I expected to be an outright comedy, but this best work to date by Taika Waititi is much, much more.

Little Johannes is a loyal and dedicated member of the Hitler Youth. He is, in other words, a good little Nazi. And, his mom seems to go along with his apparent fanaticism – but, she really knows better about her son. When Jojo prepares for his big day, the day that he will become a man, she sends him on his way, playfully telling him “It’s dangerous out there.” To Rosie, life is an adventure and she conveys that, always, to the boy.

He attends the youth rally with the vision of pending manhood. Then, the group leader, Captain Klenzforf (Sam Rockwell), gives Jojo “the test.” He must break the neck of a rabbit. The sensitive, caring boy cannot do it and is taunted by all (except his best friend Yorki (Archie Yates)) and given the shame-ridden nickname “Jojo Rabbit.” He runs away and goes to his empty home. He calls out, but there is no answer. Then he hears a noise upstairs.

If running away is a heinous enough shame, it gets worse when he discovers, upstairs in a small hidden room, a stranger, Elsa, who he soon learns is a Jew. This confusing revelation, for the boy, puts to the test his devotion and loyalty to the Fuehrer with the far greater love he has for his mom.

Waititi locates his story during the waning days of World War II. The Germans are losing the war on both east and west fronts which only increases the volume of the Nazi propaganda machine and its false rhetoric of coming victory. The time and place of this enthralling story should predicate that the results be serious and somber. “Jojo Rabbit” is anything but.

Young Roman Griffin Davis holds center stage with his inherently nice young kid, Johannes, as he faces the trials and tribulations as a 10-year old coping with the fast approaching, destructive war. While young Davis is the spirit of the story, Scarlett Johanssen, as Rosie Betzler, is the heart and soul of “Jojo Rabbit” and gives the story a special light. The rest of the supporting cast are given and give fully fleshed out characters with the brief on screen time allowed. Notable among them are Sam Rockwell as the conflicted Captain Klenzendorf, young Archie Yates as BFF Yorki and, in a more than comic performance, Taika Waititi as the imaginary Adolph Hitler.

Production is first rate and the end-of-war setting is, as the story rolls out and the intensity increases, a vivid depiction of the pain and suffering that war actually causes – not just soldiers die. Whatever expectations I had before watching “Jojo Rabbit,” they are nowhere near what Waititi and his cast and crew have accomplished in this fresh, funny and sad story about a boy and his mom.