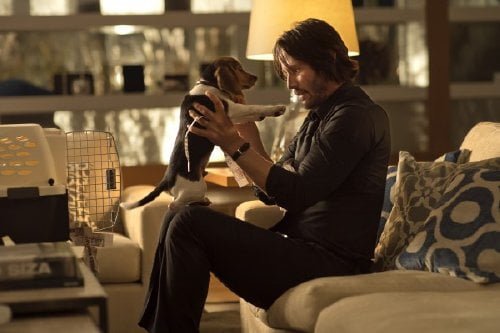 John (Keanu Reeves) is grieving the loss of his wife to cancer. When mob thugs kill the puppy, Daisy, his wife’s dying gift to help him with his grief him and steal his vintage 1969 Mustang, the former hit man is forced to come out of retirement to seek revenge. He may be just one man against many but those many do not know the man is “John Wick.”

A hit man so feared he was known as The Boogeyman manages to leave the life behind by pulling off a job his Russian mob boss thought impossible. But five years later the woman he married succumbs to an illness. Hope is offered in the form of a puppy, Daisy, that Helen (Bridget Moynahan, "The Sum of All Fears") had arranged be delivered to her beloved after her death, but his past reappears in the form of a second generation to snatch it away. Iosef Tarasov (Alfie Allen, HBO's 'Game of Thrones') didn't know who he was messing with when he went after "John Wick." As he says in character, Keanu Reeves is back, directed by his former "Matrix" body double Chad Stahelski and stuntman David Leitch in a fast-paced actioner with an astounding body count. As one might expect from a film choreographed by two stuntmen, the film's action scenes are fast and fluid, beautifully shot with a nighttime neon color scheme by cinematographer Jonathan Sela. Derek Kolstad enlivens his screenplay with a comical mythology for Wick's hitman world that includes its own economy and a private hotel, the Continental, where killers can come in from the cold for some R&R. The film's beginnings are somewhat reminiscent of "The Crow," a man leaving a cemetery to grapple with memories of his lost love. But when he gasses up his '69 Mustang, he draws the attention of three Russians, namely Iosef, who wants it no matter that it's not for sale. When Wick awakens to Daisy's whining, he finds three masked men in his home, and, caught unawares, he's beaten, his dog killed, his car stolen. Word gets back to his former boss, Iosef's father Viggo (Michael Nyqvist, the original "Girl with the Dragon Tattoo," "Disconnect"), from hot car body shopper Aureilo (John Leguizamo), who's recognized his friend Wick's Mustang. Viggo informs his son in no uncertain terms that he's royally screwed up, then sends in a dirty dozen to meet the threat head on. When Reeves, who seems to be challenging Tom Cruise in the 'what, me 50?' do-my-own-stunts department, gets back in gear, he's like a ghost warrior, twirling, rolling, spinning, stabbing, firing on all cylinders so quickly he's gone before the bodies drop. But while these scenes have an almost balletic grace, by the film's third act, inevitability wears in. Kolstad and company aren't satisfied with Wick attaining his goal, they feel the need to throw in one more sacrificial call to arms. The film's at it's best when it's winking wittily - Jimmy the cop's response to a noise complaint, the smooth ministration's of the Continental's manager Charon (Lance Reddick, 2013's "Oldboy," 'American Horror Story: Coven'). The cast is sprinkled with recognizable faces (Willem Dafoe as former Wick colleague Marcus, Ian McShane as Continental owner Winston, 'Treme's' Clarke Peters, "The Warriors'" David Patrick Kelly) for flavor, but it's Reeves's vehicle and he's in fine form. Nyqvist is terrific as Viggo, resigned once his hand's been forced. Grade:

Stunt men turned first time directors David Lietch and Chad Stahelski, with the screenplay by Derek Kolstad, team up with Keanu Reeves, who is a proven action star, and bring us an action-packed, stuntman bonanza of violence and mayhem, but in a good way, similar to this year’s “The Equalizer. Within minutes of the start of the film, the stage is set when the son, Iosef (Alfie Allen), of the Russian(?) mob boss, Viggo Tarasov (Michael Neediest), run into Wick as he pumps gas. Itself likes the Mustang offers to buy the muscle car, which John politely refuses. Next thing you know, the thugs break into his home to steal the car and take the one thing that he could share his grief with AND brutally beat him. The widower goes to his basement with a sledge hammer and breaks up the floor and unearths a cache of weapons and gold. Then things get ugly – for the mob. “John Wick” is a guy movie (and for women who like Keanu – especially as he plays a sensitive man who grieves the loss of his wife and puppy) and it is chock full of action, many shootouts and, one of my favorite things, real, live action stunts. The film does not have the style or imagination in methods of mayhem as “The Equalizer” (death by tree pruner, for example) but it is its equal, maybe better, in fight choreography. Real stunts, in my mind, can never be replaced, really, by CGI, though many may argue different. It is a pleasure to see a real art get its rightful notice in a solid action thriller.