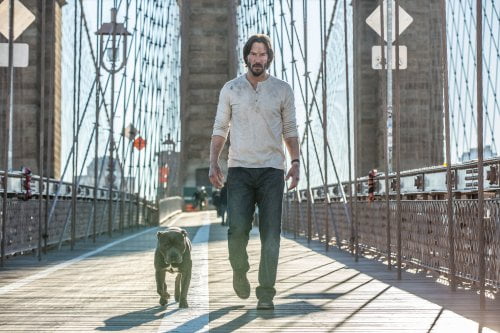 When Winston (Ian McShane), the head of secret assassin society The Continental, orders a former member to honor the gold marker Italian gangster Santino D’Antonio (Riccardo Scamarcio, "Burnt") has presented for repayment of past favors, retirement into civilian life must be put on hold for "John Wick: Chapter Two."

Action junkies are going to love this. "John Wick's" director Chad Stahelski and screenwriter Derek Kolstad ("John Wick") have upped the ante in every possible way in what may be ultimate 'Just when I thought I was out...they pulled me back in' franchise. With Keanu Reeves judoing, jiu-jitsuing, car-fuing and pencil gouging his way through a 141 body count, "John Wick: Chapter Two" is 120 minutes of mayhem in a game gone global. In a prologue both brutal and amusing, Wick (Keanu Reeves) visits the warehouse of Abram (Peter Stormare), the guy's whose nephew stole the wrong car and killed the wrong dog, to retrieve his beloved Mustang. After wiping out Abram's goons (and his own car, which receives a wry damage estimate from Aurelio (John Leguizamo)), he pours the terrified Russian a shot of vodka and toasts to peace (Reeves trots out Russian, Italian and sign language this time around). Wick spends some time moping over Helen's picture and bracelet, his new, nameless dog at his side. But after burying his cache of Continental paraphernalia in his basement, the doorbell rings. Santino may have promised never to turn in Wick's marker, but he now believes he has a case as Wick came out of retirement. After Wick refuses to take it, Santino blasts three missiles into his house (his old buddy, the cop Jimmy (Thomas Sadoski) arrives to speculate). Resigned after talking to Winston, Wick learns Santino wants him to kill his sister, Gianna D'Antonio (Claudia Gerini, "The Passion of the Christ"), to clear a seat for him at the 'High Table,' a global organized crime group. After prepping with the Italian Continental's 'sommelier,' cartographer and tailor (played by Wick costumer designer Luca Mosca), this is accomplished in Terme di Caracalla, a second century Roman bathhouse, but it doesn't go down how Wick expects. Then there's the matter of Santino's army, because, after all, how would it look if a man didn't avenge the murder of his sister? An intense shootout let by the mute Ares (Ruby Rose, "xXx: Return of Xander Cage") is followed by hand to hand combat with Gianna's security head, Cassian (Common) through the streets and down several flights of stairs until they crash into the hotel lobby where rules forbid further fighting. They share a drink as a 'professional courtesy.' Upon returning to New York City, Wick quickly learns that Santino has issued a $7 million hit with the city's assassins, but he finds an ally in the Bowery King (Reeves's "Matrix" costar Laurence Fishburne) who runs a group hiding in plain sight as New York's homeless. But things take a shocking turn that leaves Wick with no recourse but an even higher staked third installment (I'm betting Jimmy finally gets a bigger role the third time around). If it seems a it weird to see Reeves, who projects a real life Zen Buddhism, portraying The Boogeyman, there is no doubt that the role fits him well. His Wick is a black and white mixture of soft sentiment and lethal stoicism, moving with balletic physicality. The returning cast add layers of humor and empathy (Ian McShane and Lance Reddick's Charon clearly view Wick with affection) while Fishburne's histrionics keep his sympathies mysterious. The production is slick, a concert in Rome's Villa Borghese gardens (Ciscandra Nostalghia, who had a track on the first film's soundtrack, performs) a glossy retake on "The Crow's" My Life with the Thrill Kill Kult show. The John Wick franchise is being structured like a video game. Bring on Level 3. Grade: