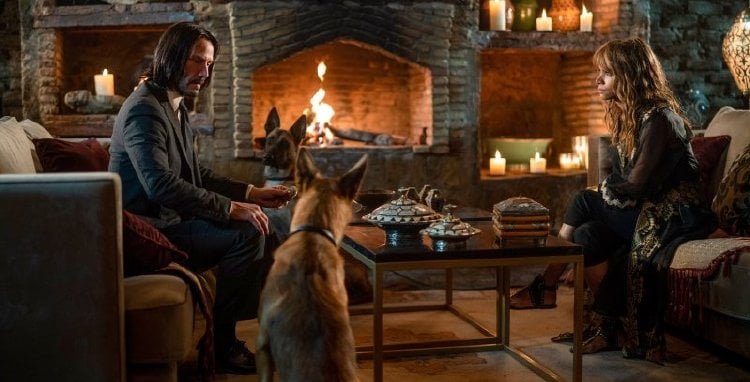 “Si vis pacem, para bellum (If you want peace, prepare for war).” When the High Table’s iconic assassin broke their rules by killing a fellow member in the safe space of the New York Continental Hotel, its manager Winston (Ian McShane) gave him a 1 hour head start before being proclaimed excommunicado with a $14 million price tag on his head. The only man who managed to get out of the racket only to jump back in to avenge the murder of his puppy is now up against the entirety of a lethal global society in “John Wick: Chapter 3 - Parabellum.”

It’s hard to imagine just how franchise director Chad Stahelski and star Reeves are going to top Chapter 3, the most action-packed and outrageously violent of the series to date. And there is no mistaking that there will be a Chapter 4, this edition the first to feel like a connective piece within the whole, beginning immediately where “Chapter Two” left off and ending with another of Wick’s allies throwing down a gauntlet. This film may be the least able to stand on its own, but series creator Derek Kolstad, joined by screenwriters Shay Hatten and Chris Collins, expands his world considerably, giving us a peak into Wick’s origins and past associations while also exposing more of the High Table’s hierarchy. Wick is in the thick of it well before his excommunicado status is officially announced. ‘Tick tock’ warns a Bowery assassin (Jason Mantzoukas) in an alley, John jumping into a cab to the New York Public Library, sending his dog off to the Continental’s concierge with a gold coin used in trade for service. At the library he keeps a book of Russian fables containing several more coins and other underground currency. An attack in the stacks by Ernest (NBA star Boban Marjanovic) showcases Wick using every trick in the book but leaves him seriously injured. A visit to the Doc (Randall Duk Kim) with five minutes to spare gives us a lesson in just how dangerous it is to provide Wick a service. After taking out Asian assassins with mind blowing throwing knife skills and eluding others on motorcycles utilizing a city stable (Wick’s skills with horses recall feats from the great Jackie Chan), John makes his way to the Tarkovsky Theatre that trained him, demanding passage to Casablanca from The Director (Anjelica Huston), his ‘ticket’ an ornate Russian rosary. Meanwhile we learn the High Table has an enforcer of its rules. The Adjudicator (Asia Kate Dillon, Showtime’s ‘Billions’) drops in on Winston to inform him that his loyalty to Wick has cost him his job and that he has one week to transition out. Next is a visit to the Bowery King (Laurence Fishburne), whose procurement of a weapon for Wick garners him a sentence of seven cuts. In Casablanca, Wick seeks The Elder (Saïd Taghmaoui) by way of Morocco’s Continental, now run by Sofia (Halle Berry) whose daughter he once saved. Sofia, another lover of dogs (her pair of trained Malinois get in on some fabulous action), is hesitant to help, then burns everything down to the ground confronting her boss Berrada (Jerome Flynn), the keeper of the High Table’s foundry. Stahelski’s production is stellar even if it is beholden to many other movies. The administrative arm of the High Table resembles the retro stylings of “Brazil” with its switchboards, typewriters and rotary dials. New York exteriors recall “Blade Runner,” cinematographer Dan Laustsen favoring rainy midnight blues and neon reds, pops of gold anticipating the Sahara of “Lawrence of Arabia” in Morocco. A climactic battle in a glass gallery within the New York Continental is so beholden to Roger Deakins’ “Skyfall” Shanghai sequence, it’s borderline cinematic plagiarism. Costume designer Luca Mosca revels in dressing the film’s new characters, The Adjudicator all sleek Gothic chic, The Director stylish Babushka, Sofia a hit woman in functional harem wear. The film’s screenplay and score both make sly canine references, Wick directed to The Elder via the Canis Minor, the refrain of The Stooges’ ‘I Wanna Be Your Dog’ backgrounding an underwater fight scene. Reeves continues to impress with his graceful, lethal speed. He takes innumerable hits and keeps on powering through, editor Evan Schiff never cheating the unrelenting choreography. (I’d really love to see Reeves go head to head with Cruise, betting on Reeves’ stamina.) Berry is impressive as well, her training evident (she broke three ribs and returned!), and it is a pleasure to see Lance Reddick’s concierge (TV’s ‘Corporate’) get in on the action this time around. Chosen by The Adjudicator to wipe out wick, Mark Dacascos adds a goofy quality to sushi chef Zero, a formidable opponent when he’s not being a fan (his student advance team are “The Raid’s” Yayan Ruhian and Cecep Arif Rahman). “John Wick: Chapter 3 - Parabellum” is not for the faint of heart with its eye gougings, toenail rippings and hand skewerings, but action fans should be left breathless. That the film is such a treat for the eyes is gilding the lily. Grade: