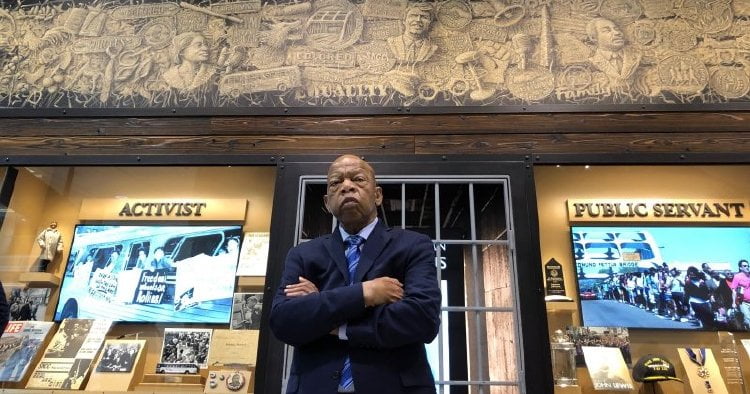 Back in the early days of the civil rights movement, a fifteen year-old from Alabama decided it was time to get involved.  When he never got a response to his college application, he wrote a letter to Martin Luther King and not only did he get a reply, he got a bus ticket to join the man where he was nicknamed ‘The Boy from Troy.’  Director Dawn Porter (“Trapped”) reviews how this 17 term congressional representative has spent his adult life fighting the good fight in “John Lewis:  Good Trouble.”

“Good Trouble” is what Lewis, who proudly recounts having been arrested forty times during the civil rights era and five more during his years in Congress, calls fighting for what’s right.  As Porter shows us, it has been the 79 year-old’s defining characteristic.  The acknowledgement of this which seems to have moved him the most was a note Barack Obama passed to him on the day of the 44th President’s inauguration – ‘It was because of you John.’

Porter shakes up the usual documentary talking head/archival footage methods by plunging Lewis into the screen, either sitting on a stool in front of unspooling film he comments upon or directly addressing the camera.  She also brings out the man’s buoyant personality with current glimpses of him relating to Black women from Texas after a church service and one of his staffers relating how her recording of his impromptu office dance to ‘Happy’ went viral.

The documentary also has its far more sober side, illustrating how Lewis is now having to fight to rewin many rights, like voting, he’d succeeded in obtaining in the past.  Amazingly, Donald Trump is never once mentioned.  In a bit of extraordinary serendipity, Porter includes footage of the octogenarian running up a ramp – in the rain.

Ironically, Porter points out one of her film’s weak spots.  Noting that Lewis is too often thought of as a civil rights leader and not as a legislator, she proceeds to sum up his years in office with a montage ticking off the successful bills he authored without any exploration of their significance (true most are fairly obvious, but the device fails to give equal weight to the congressman’s career).

The late Elijah Cummings makes an appearance to humbly and humorously note how many times he’s mistaken for his colleague and what an honor it is.  We also hear from newcomers to the political stage like freshman congresswoman Ayanna Pressley and Stacey Abrams who notes having found Lewis’s great-great grandfather’s voter registration card only to come to the realization with Lewis that he was the next family member to have acquired one.

John Lewis met Martin Luther King in 1957 and began a 60-year career as a social activist, political dissident and legislative leader that continues unabated to this day. He has fought for civil rights for African Americans, woman and the socially downtrodden and documentarian Dawn Porter chronicles his turbulent and successful life in “John Lewis: Good Trouble,”

I think that this heartfelt documentary on the life of John Lewis – which could have the alternate title, “The Little Giant” - is both deserved and timely. I have been familiar with the congressman’s activism and legislative career and his many accomplishments for years. Enhancing my knowledge, filmmaker Porter assembles copious archival footage of Lewis’s participation in some of the most socially groundbreaking event, like the Selma march in ’63 and the MLK-led march on Washington DC in 1965. And there are many more examples of his bravery and heroism, sustaining beatings and injuries and fighting for our rights.

Director Porter, besides giving us an in-depth chronicle of the man, physically small but intellectually huge, also provides a concise history on modern civil rights in our country. The genesis of this movement is shown with Rosa Parks’s courageous decision to sit in the white section on a bus in 1955 and the subsequent Montgomery, Alabama bus boycott that lasted a year until the US Supreme Court stepped in.

John Lewis and his long career and accomplishments are given ample coverage by Porter, especially his rich and commanding voice. But, time is also given to get inside the personality of the man, his whimsy and a killer dance number that went viral. The title “Good Trouble” is defined by Lewis as “necessary trouble that is right.”