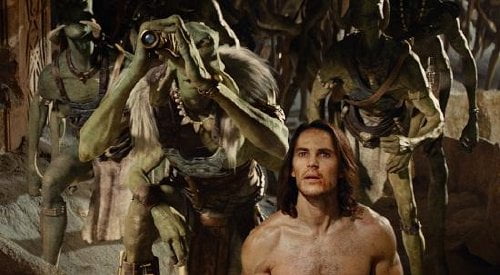 In 1861 Arizona, a Civil War hero refuses to aid the Army in their war against the Apaches. He's imprisoned, but escapes on Colonel Powell's (Bryan Cranston, AMC's 'Breaking Bad') horse and finds a cave of gold. But he also finds a medallion which transports him to a place where his movements become extraordinary leaps. He'll soon discover he's landed on a warring planet and now every side wants to obtain the talents of "John Carter."

There is a distinct problem in adapting 'Tarzan' creator Edgar Rice Burroughs' "A Princess of Mars" in that this science fiction forerunner has already influenced everything from "Star Wars" to "Avatar." Director Andrew Stanton ("Toy Story," "Wall*E"), making his live action debut, admirably decided to keep the material wedded to its time, but he can't get around the fact that his Tharks resemble Jar Jar Binks and the whole enterprise resembles last year's "Conan the Barbarian" remake. And they should never have abbreviated the title. The film starts poorly, with a cheesy looking exchange between bad guy Sab Than (Dominic West, "300") and bad-guy-parading-as-good-guy Matai Shang (Mark Strong, "Green Lantern") that establishes the importance of the medallion with lots of blue laser flashing before heading back to Arizona for so much exposition it feels like we'll never get to Mars, or, as the Martians here call it, Barsoom. (As if the filmmakers won't have enough problems making this material feel fresh, there's an Arizona set scene straight out of "Jeremiah Johnson.") Things perk up when Thark leader Tars Tarkas (voice of Willem Dafoe, "Fantastic Mr. Fox"), a nine foot tall green, four-armed creature with tusks, arrives on the scene and insists on only hearing the 'Virginia' part of 'John Carter of Virginia' as a moniker for the stranger in a strange land (Taylor Kitsch, TV's 'Friday Night Lights,' "X-Men Origins: Wolverine"). Carter's captured, put into the care of Sola (voice of Samantha Morton, "The Messenger") and unwittingly gains the undying loyalty of Woola, a 10-legged doglike creature that zips around like the vampires in "Twilight." Woola is the the movie's chief asset, at least until Carter meets that Martian Princess, Dejah Thoris (Lynn Collins, "X-Men Origins: Wolverine"), a female Red warrior trying to save her city of Helium from the conquering Red Zodangans. Collins makes Thoris's cause one worth fighting for even as her own father Tardos Mors (Ciarán Hinds, "The Woman in Black") buys into wedding her to Sab Than to bring peace between the two. But Stanton and his cowriters Mark Andrews (Pixar's "One Man Band") and Michael Chabon ("Spider-Man 2") cloud their narrative with too many characters on too many sides while underfeeding some of the details that would help explain them (why, for example, is Sola a branded, last-chance outcast and why doesn't she seem to know who her father really is?). And for a film mired in CGI why does it look like a dusty western? Even the green Tharks seem to bleed into the dusty environs. Flying machines look fit for Jules Verne but have no panache. The big, heavily touted arena fight with the Great White Ape is a retread of the Star Wars arena beastie battles. A bookending device which casts Edgar Rice Burroughs (Daryl Sabara, "World's Greatest Dad") as Carter's nephew-to-become-earthly-guardian confuses the story's time line. "John Carter" is an OK entertainment, but a huge disappointment as a very expensive tentpole movie adapted from a beloved work of geek fiction. That said, now that its world has been established, it could prove to be the "Star Trek: The Motion Picture" of a series that crawls before it can run. ("John Carter" was converted into 3D rather than being shot in that format and, once again, doesn't justify a ticket increase.)