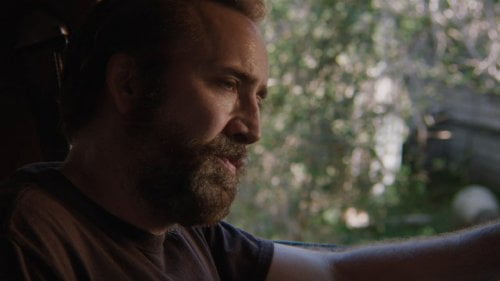 Ex-con Joe (Nicolas Cage) runs a business poisoning trees so the lumber companies can legally come in to clear the forest. A young newcomer to the town, 15-year old Gary (Tye Sheridan), approaches Joe for a job. He agrees to hire the lad and finds out that the tough kid, along with his mother and sister, is badly abused by his vicious, drunkard father. The boy needs a real friend and that is “Joe.”

As young Gary (Tye Sheridan, "The Tree of Life," "Mud") watches from a distance, a work crew supervisor (Nicolas Cage) surrounded by his men picks up a poisonous snake. Gary asks to see it and he's told the venom in the cottonmouth's fangs will kill him. But the man tells his workers not to destroy it as it's 'his friend' and throws it into the scrub. But the young boy seeking work will be inadvertently releasing a human snake onto the path of "Joe." It's been refreshing to see director David Gordon Green ("Pineapple Express," "Prince Avalanche") get back to his indie roots and even more miraculous to see Nicolas Cage do what he used to do best - act. If their film is only a minor work, however, it is because the story (Gary Hawkins adapted Larry Brown's novel) is a well worn tale of the martyr saving the innocent, however realistically dressed in Southern Gothic. Joe Ransom is a good man with a criminal history, largely due to his inability to respect the often corrupt arm of the law. He's got a strong work ethic and is obviously held in regard by those willing to earn their pay (that what these men are doing - killing trees so that land may be cleared legally - isn't exactly aboveboard is in keeping with the local economy's means of survival). Joe cherishes his American bulldog and his beat up truck and spends his off time drinking and helping out the locals, whether it be showing a man how to correctly butcher roadkill or letting the adoring Connie (Adriene Mishler) move in when she's having trouble with her ma. He's trying to keep a lid on his demons, but when he begins to see what Gary's up against, he becomes the kid's champion and, eventually, crusader, unleashing his rage against the unjust. Gary lives in a condemned shack with his battered mother, alcoholic dad and mute sister. When he brings dad G-Daawg (Gary Poulter) to work the next day, Joe needs to reconsider just what he's taken on as Gary's dad is not only lazy but clearly trouble. But when the kid shows up at his door after a beating, vowing to kill the man who delivered it, Joe can't turn away. Gordon Green encompasses a whole way of life in his character study of "Joe," a place of country roads and convenience stores which limit people's spending choices while fulfilling their social needs, where bar brawls can be forgotten the next day or lead to long lived grudge matches, where animals are companions, guards, sporting targets and meat but never pampered pets, where the law can mean harassment or compassion for those they know well. There are a wealth of characters here, but only a few really stand out, the rest disappearing into Green's tapestry. Cage balances his propensity for big, wonky acting with a restraint here, his character's basic decency overwhelmed by fatigue only giving way to violence when his sense of justice is provoked. (Green frustrates his audience but aids the performance by not allowing us to see the note left by Connie when she leaves Joe, his resources to deliver the innocent to a better life just stretched too thinly.) Sheridan proves once again that he's the real deal with his naive hero worship, his family loyalty so strong it has to be beaten out of him. Joe is clearly his spiritual father and Sheridan makes us feel that with his fierce protectiveness of mother and sister. Poulter, a homeless man who died tragically months after shooting completed, is incredible, a man willing to sell his daughter and murder for the remains of a bottle of wine, yet whose one expression of joy discloses what's been lost. Also good in a small role is Aj Wilson McPhaul as Sheriff Earl, Joe's friendly foe. Green wraps with an epilogue that's perhaps a bit too on the money with its bookending allegory, but it feels right to deliver some hope after so much wretchedness. The film may take one too many detours on an overly familiar road, but it's been crafted with real feeling.

It is nice to see Nicolas Cage inhabit a character worth watching, as in “Leaving Las Vegas,” instead of yet another “National Treasure” sequel. “Joe” is more the former than the latter as the titular character, a very troubled man who drinks too much and is too volatile for his own good, copes with his demons. When young Gary comes into the picture, he is a breath of life for Joe, who puts aside his foibles to help the kid from a bad situation – his father, Wade, AKA G-Daawg (Gary Poulter). The dynamics of “Joe” are multi-faceted with the relation between Joe and Gary, Gary and Wade and, ultimately, between Joe and Wade. This is not a hopeful film by David Gordon Greene but a modern tragedy that does give hope to the future – Gary. Cage is great as Joe and he gives his character a blue-collar verisimilitude. Tye Sheridan continues to impress as an upcoming young actor and he gives Gary depth of feeling and emotion with his father/son bond with Joe. Things turn out, in “Joe,” as you would expect but not the way you hope for. Now that is how to involve the audience.