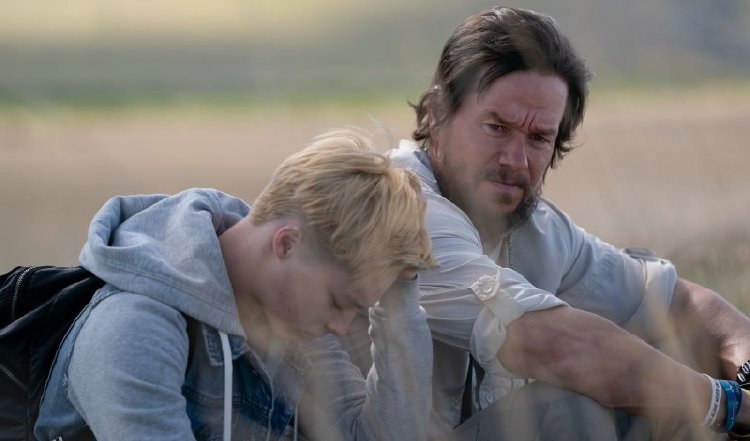 In 2013, a working class father from La Grande, Oregon decided to walk to New York City, the place his teenaged son Jadin (Reid Miller) had hoped to move to, to draw attention to the bullying and intolerance which made Jadin’s life a living hell.  The man who was still struggling with his own problematic handling of his son’s situation was “Joe Bell.”

Wahlberg, who infamously attacked two Vietnamese American men while using racial slurs and who has also been known for his attacks on Blacks and gays back in his Marky Mark days, is clearly atoning for his past with this role and while cynicism might come easily in these days of continual ‘woke apologies,’ there is never a moment here when his performance doesn’t come across as genuine, even quite moving in some scenes.  The film itself, however, as written by the "Brokeback Mountain" team of Diana Ossana and the late Larry McMurtry and directed by “Monsters and Men’s” Reinaldo Marcus Green is bumpy.   The writers use an early device that, while effective in intent, shouldn’t have been intended to surprise (it doesn’t), undermining it.  Characters and situations are underwritten and while Green mostly keeps the wheels on this earnest effort, the film wanders into corn and cliché.

After an opening which foreshadows the film’s end, we flash back to the events which led Joe (Wahlberg) to take to the highway.  As Joe settles down to watch TV, his son Jadin asks to talk with him - in private.  Annoyed, Joe agrees and listens to his son’s tearful tale of severe bullying.  Responding with reminders of lessons on how to fight and a lecture on how whipping these guys will make them stop, Joe’s caught short when Jadin responds that they won’t – because he’s gay.

While this isn’t news to mom Lola (Connie Britton) hovering in the background, it is to Joe, but he doesn’t react to it, at least not aggressively.  His discomfort comes out in other ways.  When Jadin practices cheers with his bestie Marcie (Morgan Lily) in the front yard, dad yells at him to get in the back, making up an excuse about noise levels.  When other parents throw things at his son cheerleading at a Cougars game, Joe takes Lola’s hand and slinks out of the bleachers.  These are moments that he will deny, then wrestle with, on the road, just as he finds it far easier to talk to supporters than the very people whose minds he is supposedly out to change.

It was a good idea to parallel past and 2013’s ‘present’ to reflect Joe’s growth, but Joe’s betwixt and between reaction to Jadin feels compromised and over corrected.  When Lola and the Bell’s younger son, Joseph (Maxwell Jenkins), drive out to meet Joe on the road, Joe’s inherent rage is exhibited far more violently with Joseph than we ever witness with Jadin.  Still Wahlberg is in entirely new territory here and he can be effective, whether merely listening to a gay man in a bar the way he never listened to his son or commiserating with the Colorado sheriff (Gary Sinise) who recognizes another flawed father and books Joe in to speak at his local high school.  The relatively unknown Reid Miller, who looks astonishingly like the real Jadin Bell, is sure to see his star rise after this performance where he gets to show a full range of emotions, even if too many of the situations that give rise to them are left undeveloped.  Britton is also effective as the more sensitive Bell parent, but her role is underwritten, hinting at things which are left unexplored.  The same can be said for Igby Rigney as a young football player who secretly expresses interest in Jadin only for their story to trail off.

“Joe Bell” is frustrating, at times feeling like an after school special, the type of movie where high schoolers all show up at a Halloween party in professional looking costumes and makeup, a cliché I’ll call ‘the over produced school play syndrome.’  A surer hand at the helm may have smoothed out some of this film’s problems, but its heart is in the right place and its message ultimately delivered.

Jadin Bell (Reid Miller), a high school sophomore and openly gay, withstood bullying and abuse by his classmates for a long time in small town La Grange, Oregon. When it all proved too much to bear, he hanged himself and later died. His father, Joe (Mark Wahlberg), tormented by the loss of his son and what he could have done to prevent his death, decides to walk across the country, alone, to spread the word against bullying in “Joe Bell.”

If you know anything about Mark Wahlberg’s turbulent youth, you may wonder why he is starring in a true life story about bullying and the tragedy it can cause. Well, I think the actor grew up and this emotional biopic is his way of telling us so.

May, 2013 and Joe walks along the road pushing a cart loaded with his supplies. He stops at Twin Oaks, Oregon to give a talk to the locals about the dangers of bullying and is met with silence. The story flashes back nine months to the Big Game on TV in the Bell household. Jadin tells him that he was brutally bullied at school because “I’m gay.” Joe’s sage advice is “stand up for yourself” and ignores his son’s plea for help.

What transpires is a back and forth between Joe on the road, making his case to whoever will listen and flashes back to all the ignored warning signs he had of Jadin’s plight. The filmmakers use a device that makes sense and is clichéd at the same time: Jadin “joins” his dad on the road. It is a cliché that we have seen before but, here, the device succeeds in showing Joe’s sorrow at the loss he knows he could have prevented and the reason for his journey for redemption.

The true life story is a true American tragedy as we watch Joe being ignored in his awakening tour, the show of the mounting abuse as Jadin suffered daily just for being gay and the loss and disintegration of a family because of our hostile and hateful society