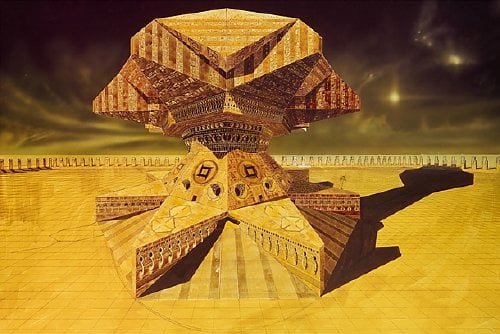 Most avid science fiction fans of the 1960s and 70s were treated to the seminal sci-fi novel of the time, Frank Herbert’s Dune. We all anticipated the feature length film adaptation and were more than disappointed with the confused version by David Lynch in 1984. But, there was another, grander attempt to adapt the difficult book and that colossal effort is told in “Jodorowsky’s Dune.”

After his films "El Topo" and "Holy Mountain" made him the first midnight cult film director, Alejandro Jodorowsky was given carte blanche in 1975 to choose his next project. Without even having read the book, he picked Frank Herbert’s science fiction novel because he believed he could change the fabric of cinema, creating effects that would be like experiencing LSD while blowing audience's minds with new ideas. Over the course of two years he assembled an unprecedented pool of talent whose creations for him would go on to influence cinema for decades to come, yet in the end, he couldn't get the financing to complete "Jodorowsky's Dune." This 2013 Fantastic Fest multiple award winner is like the ne plus ultra of blu-ray extras for a film that was never made. Director Frank Pavich uses director Nicolas Wynding Refn's ("Drive") anecdote of 'seeing' the film at Jodorowsky's Paris apartment late one night (Jodorowsky owns one of two oversized story board/conceptual realization books made for the project) as his entryway into this enthralling account of cinematic history told by the people who were there. The central figure is Jodorowsky himself, of course, and he's a delightful raconteur, both passionate and light-hearted (he smiles as he tells us one must not respect the novel and that he 'raped' Herbert's book - but with love). When he reached out to Dan O'Bannon, an early John Carpenter collaborator and "Alien" screenwriter, the late filmmaker told him he 'expected an erudite lunatic' but instead found a 'continental gentleman.' Those who've seen Jodorowsky's films but know little about the filmmaker may find themselves in complete agreement. The man epitomizes the role of director - a man with a huge vision ingenious enough to gather around himself like-minded artists to bring it to life - and so he creates future filmmakers from cartoonists (Jean 'Moebius' Giraud), surreal sculptors (H. R. Giger) and science fiction cover artists (Chris Foss). He convinces Pink Floyd to do a concept album and lures Orson Welles to a role with a French chef. He casts Salvador Dali by tricking his ego, David Carradine for his chutzpah and has his 12 year-old son Brontis train in swordplay 7 days a week for 2 years in order to play Paul. When he finds in demand special effects artist Douglas Trumball's ego unspiritual, he turns to perplexed indie guy O'Bannon. Throughout preproduction, Jodorowsky is blessed with coincidence, people whom he has no idea how to locate falling into his lap. Pavich shows us the awe-inspiring work these artists created for Jodorowsky's vision (Foss created an Emperor's Palace fit for M.C. Escher and astounds by telling us it was architecturally sound), then fast forwards from "Star Wars" through "Promotheus" to illustrate how their work has resonated on movie screens for decades. Those Hollywood Studios who were impressed with what Jodorowsky and his producer Michel Seydoux had to show them, but not enough to bankroll it, appear to have stripped the unmade film. And yet Jodorowsky marched on. It's amusing to see the impish 84 year-old copping to joy when he saw how 'awful' David Lynch's eventual adaptation turned out, but cinephiles and science fiction fans alike may forever be frustrated by a vision unfulfilled.