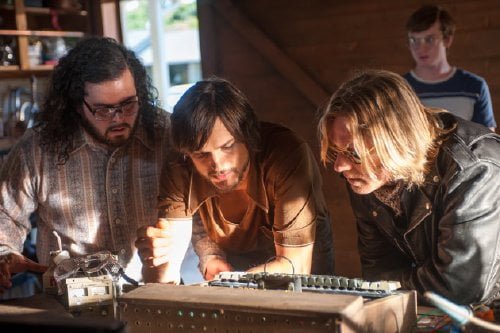 The name Steve Jobs is synonymous with trail-blazing entrepreneurial success and the man behind the Apple Computer legend. His adult life, inauspiciously beginning as a college drop out, would bring to millions the means to control information at the individual level. His up and down ride to fame and fortune is shown in the life of ”Jobs.”

A young college drop out continues to haunt the halls of Reed college, bored by computer class, inspired by calligraphy. He travels to India, then works at Atari where his difficult personality is endured because of his brilliance. When his buddy Steve Wozniak (Josh Gad, "The Internship") cobbles together a computer for his own use, the young man foresees a revolution and in 1976 the two found Apple Computer. His name was Steve "Jobs." In the film's very first scene, the 2001 Apple Town Meeting where Jobs announces the iPod, we see the gray haired Jobs lope across the stage in a long shot and it appears that Ashton Kutcher, an actor known for embracing technology, has actually captured the man. But the effect wears off quickly. Kutcher's not bad delivering dialogue, but he allows us to see every bit of labor he puts into Jobs' physicality, and he, writer Matt Whitely and director Joshua Michael Stern ("Swing Vote") never succeed in discovering just what made Jobs tick. "Jobs" would have been more appropriately titled "Apple," the man's fifteen year exile from his company given about a minute of screen time. After that town meeting, the film flashes back to show us Steve's earlier years, establishing him as a visual, right-brained, big picture kind of guy. They also quickly make no bones about the fact that the man could be a right bastard - he picks up and sleeps with a pretty college student and when she offer him an acid tab, asks for another one - for his girlfriend. She's Chris-Ann Brennan (Ahna O'Reilly, "Fruitvale Station"), the loyal girlfriend whom Jobs kicks out when he learns she's pregnant, denying paternity. At Atari, he's given a challenge to streamline a difficult game for a bonus of $5,000. He gets Wozniak to do it, telling him they'll split the windfall of $700. One of the problems with Jobs is that too many leaps are made. Why bother to tell us of this low level swindle then neglect to detail how Jobs screwed Wozniak over with the company they both founded? Even Wozniak's early PC is left a bit of a mystery for non-geeks - it's impossible to tell what it's doing. By the same token, the daughter, Lisa, whose paternity he denied suddenly is seen living with him in her twenties with no explanation. This from a man who was adopted himself (and whose reconnection with his birth mother and a half sister is never mentioned). But the story of Apple and Jobs' troubled relationship with his own team and coup-like reascendence in the late 90's is mostly here and it swings back and forth between Jobs talking about high standards and revolutionary ideas and office machinations which frequently include callous treatment of old friends like original Apple employee (and youthful cotraveler to India) Daniel Kottke (Lukas Haas). Still, "Jobs" never tries to resolve why the man who envisioned making technology easier for people to use drove so many people away nor what spurred him to take advantage of so many, like the neighbor kid down the street he enlisted to work for free at Apple who was later denied stock. He's simply a bag of contradictions who may or may not have been erroneously removed from his own company only to return years later and have the last laugh. "Jobs" has a large cast that includes Dermot Mulroney, Matthew Modine, J.K. Simmons, Lesley Ann Warren (blink and you'll miss her!), Ron Eldard, Kevin Dunn and James Woods, but Josh Gad is the only one who makes a strong impression. For a film about a man to whom design was paramount, the movie also lacks visual distinction.