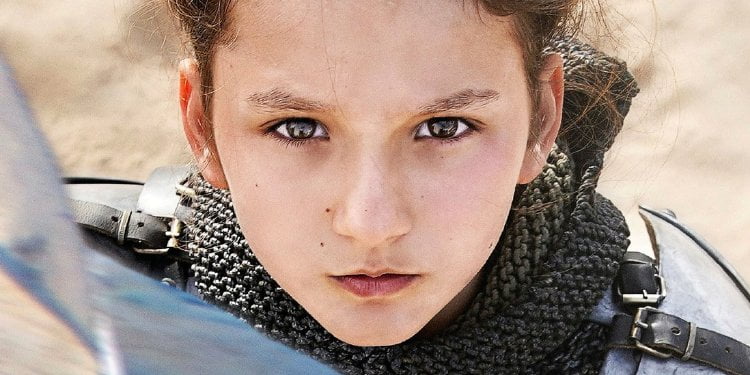 After convincing King Charles VII of France (Fabrice Luchini, "Slack Bay") that she heard voices from God compelling her to route the English from France, then defeating them in a rousing victory in Orléans in 1429, the young Lady Joan (Lise Leplat Prudhomme, "Jeanette") was determined to return and save his people by retaking Paris.  She left without the King’s blessing, was captured by the English and put on trial by the Catholic Church for heresy, a political cover to destroy “Joan of Arc.”

Writer/director Bruno Dumont has adapted the Charles Peguy play as two films, the first, "Jeannette: The Childhood of Joan of Arc," a musical.  This follow-up features song as Joan’s heavenly voices and her final damnation to hell by Guillaume Evrard (the late singer/songwriter Christophe), but is otherwise dialogue driven.  While its initial goings are comprised of a series of awkward gatherings discussing military strategy on what should be now known as ‘Bruno’s Beach’ (those familiar with Dumont’s films are sure to be familiar with the location), the film snaps into life in Rouen as Master Nicolas l'Oiseleur (Fabien Fenet) begins to describe the panel who will judge her.  Both sections of the film have a unique tone, the young Joan of Arc of serious and spiritual intent, those who debate her frequently appearing as if they’ve wandered in from a Monty Python film.  Fenet gives such a loopy performance, one keeps expecting “QuinQuin’s” Commandant Van der Weyden to join the tribunal.

After a series of meetings in the sand, in which the notorious child serial killer Gilles de Rais (Julien Manier) informs Joan that she should appeal to soldiers’ base impulses rather than loftier ideals, we witness Joan’s unsuccessful appeal to her King before the elaborate military dressage that is her sendoff to battle.  The action then returns to the Rouen Cathedral (filmed in Amiens) after her capture, Dumont using such titles as ‘early in the second to last week of May’ to move his timeline forward.

As l'Oiseleur provides a rundown, we see that there are still men of conscience, Frère Mathieu Bourat (Valério Vassallo) refusing to be an assessor.  Pro-English Bishop Pierre Cauchon (Jean-François Causeret) cedes leadership to Jean de la Fontaine (Claude Saint-Paul), saying he will be returning in the evening.  What follows is a group of increasing absurdities, Messire Jean Massieu (Robert Hanicotte), English cleric William Haiton (Yves Habert), Master Thomas de Courcelles (Daniel Dienne) and more trying to trip up a young girl whose faith and intelligence never waiver.  A torture expert and his apprentice set up shop in these men’s efforts to ‘save’ Joan, but her rejection of their demands for her allegiance to the Church rather than God proves her heresy.

That Dumont’s film is vaguely comical is an intriguing approach, one which further exposes the hypocrisy of men posing as agents of God.  As usual, the filmmaker works with a mostly nonprofessional cast, achieving mixed results, young Lise Leplat Prudhomme often acting rings around her elders.  Of note is Alexandra Charles’ costume design and Christophe’s anachronistic electronic score.  Dumont allows himself only four locations – the beach, a field, the cathedral and the outdoor British prison where Jean is held – sparing himself any costly battle scenes.  His closing extreme long shot of Joan’s burning at the stake is solemn and searing.

In 1429, a young slip of a girl named Joan, with word from heaven, led the French army to a stunning victory against the invading British to recapture the strategic city of Orleans. To her troops, she was a savior and a messenger of God. But to the invaders, she was a heretic who would be captured and burned at the stake in “Joan of Arc.”

Director Bruno Dumont takes the Saint Joan legend and, in a starkly minimalist style, tells the story of her consolidation of power in battle against the British/Burgundian alliance. Her fame comes under the scrutiny of the opposing powers’ clerics who, when she is captured, tried and convicted her of heresy - actually, the conviction was for “cross dressing” (dressing as a man and warrior) because her accusers could not find question in her purity and sincerity.

History tells of her ending in flames and the film concludes with that image taking place in the distance. Dumont takes up Joan’s story as her patron waits on the beach for word of the pivotal battle of Orleans. She emerges victorious and earns the right to be at the head of the French Army. Deceit and politics lead to her capture by the enemy, trial, conviction, sentencing and, finally, Joan’s execution.

Do not expect lavish sets and a cast of thousands in this story of battles and royal intrigue. Here, the cast is minimal, as is the set design – exteriors of a beach area often used by the filmmaker and a cathedral that has been hanging around for hundreds of years just waiting for Bruno to show up.

The aforementioned battles are done symbolically with opposing drum lines and mounted horses performing with geometric precision, shown in a striking overhead shot. The cinematography, by David Chambille, takes the stark sparseness of the beach and the equally stark opulence of the medieval cathedral and makes both locations living beings, mainly due to the inventive, fluid camera work.

This is Dumont’s sequel to his 2017 “Jeanette, the Childhood of Joan of Arc,” which also stars Lise Leplat Prudhomme, so there is an actual continuity of the character, Joan. Prudhomme, while not over emoting as the character, gives a quiet intensity to the young Joan that is quite convincing when matched against the pompous buffoonery of the clergy. The two sides are not equal as Joan pits her purity of spirit against the pomposity the so-called clerical intelligentsia of the time and bests them.

Both of Dumont’s analyses into the short, remarkable life of Joan are adapted from the plays of early 20th century French playwright Charles Peguy. As such, there is a staginess to both the acting and the dialog that, somehow, works well under Dumont’s hand. The subject is serious, indeed, but the filmmaker sprinkles humor into the proceedings, showing the absurdity of the clerics who sit in judgment on Joan, whose purity and persuasion led to her “cross-dress” conviction instead of heresy.

As I watched Dumont’s interpretation of the story of Saint Joan, I felt that the average film-goer would be utterly bored with a tale of great battles where you never actually see the battles. I, though, found the minimalism works very well and helps showcase its young star.

"Joan of Arc" is available at the virtual theaters listed here.