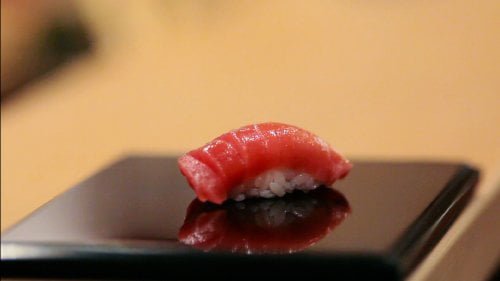 Jiro Ono is an 85 years old sushi chef who happens to be world-renown for his art. His tiny 10-seat, three-star Michelin restaurant, Sukiyabashi Jiro (located in a subway station), is booked months in advance and has attracted the most demanding gourmands in the world to sample his perfect food in “Jiro Dreams of Sushi.”

Tokyo's Ginza subway station is the unlikely setting for a legendary culinary experience requiring mandatory reservations one month in advance for the lucky ten diners who will pay dearly for it. There works a craftsman who has perfected his skills to a Michelin 3 star standard yet continually strives to be better. In fact, it is said that "Jiro Dreams of Sushi." If you love sushi, I'd advise that you have an outlet to indulge in some after seeing this film. If you're even open to the suggestion, you may find yourself with a strong yen. But even if you can't imagine partaking in the Japanese delicacy, "Jiro Dreams of Sushi" is a terrific document of a father who never had one himself raising two sons as apprentices in a craft that finds fewer willing to commit to the rigorous, years' long training required to come close to his level. Jiro has a Zen approach to his work that makes observing his kitchen akin to something spiritual. At Sukiyabashi Jiro, Jiro's eldest son Yoshikazu is still being groomed to take over the restaurant by his 85 year old father. It is revealed that he was the actual chef during the Michelin reviewer's visit, yet because of his father's legendary status, he must surpass, not just maintain, his father in order to make his own mark. Nakayawa, the senior apprentice, is free to move on as others have to open their own businesses, but the fifty year-old Yoshikazu continues as his father's employee, albeit with some owner's responsibilities due to his father's age. In the Roppong Hills, Jiro's younger son Takashi has opened a second branch of the restaurant. He has a very different relationship with his father, perhaps a more easy, relaxed one. Takashi's customers claim to get the same sushi his father makes in a more relaxed environment (Jiro himself is known to intimidate diners with his formal, serious presentation, just as his exacting demands hasten many apprentices out his door quickly). And yet Takashi's restaurant is a photo negative copy of Sukiyabashi Jiro owing to Takashi's right-handedness (Jiro is left-handed). Director David Gelb is a sushi aficionado who visited many establishments with renowned Japanese food critic Yamamoto, with the aim of making a more general documentary on the subject, but Jiro Ono changed his focus. Yamamoto is featured here, explaining why Jiro has all the attributes necessary to become a great chef and more. We are witness to a dinner service where Jiro prepares his food and sets it before diners like jewel-like works of art glistening on perfect shiny black lacquer pedastels. His tactful concessions to many things, like the gender and favored hand of a customer, are explained lest we miss the many subtleties that add up to perfection. Gelb's visuals scream digital technology with images are as pristine and sterile as Jiro's kitchen. But his focus on Ono does waver as he meanders not exactly off topic but for too long to follow a fish market trader in a sequence that feels padded for feature length ("Jiro" clocks in at a modest 81 minutes). This does allow him to address the ethics of sustainable fishing, especially as the rising popularity of sushi has impacted many species. (There's a terrific article on the subject in the June 2007 edition of Vanity Fair magazine.)

I have never been a fan of raw fish but the artistic work by Jiro and his eldest son/heir, Yoshikazu, actually made me want to try their raw tuna sushi. (I draw the line at raw octopus, though; no matter how long it is massaged.) Documentary filmmaker David Gelb brings us into the ordered day-to-day life of a man who has been performing his labor of love for 70 years. This octogenarian master chef works every day in his restaurant, only gradually relinquishing some of his duties to Yoshikazu, like shopping daily for the best and freshest fish. First-time documentary feature filmmaker David Gelb follows Jiro and his eldest through their daily life. He interviews sushi master Jiro, Yoshikazu, Jiro’s younger son Yakashi, food writer Yamamoto, former apprentice Mizatani and others who appreciate that Jiro is always striving for perfection in his art. Gelb gives us good insight into this culinary world with his crash course in sushi making as we watch Jiro and son serve up their many-coursed meals for the tidy sum of 30000 yen (just shy of $400US) per person. We also learn the five attributes needed to be a great chef – take the work seriously, always improve skills, cleanliness, impatience (great chefs are leaders) and keep the passion. The film also shows that Jiro and other great sushi chefs are nature conservationists. The popularity of sushi went ballistic over the years, causing the ocean’s bounty used to make the delicacies to be overfished, even to the point of extinction. Without fish there is no sushi.