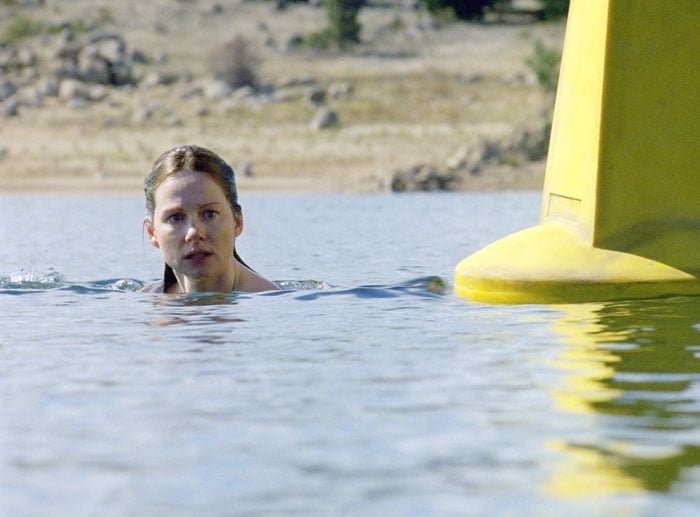 Stewart is more excited about his upcoming fishing trip with his best buddies than he is concerned about the sociopath doings of his young son, Tom. When they arrive at their favorite, remote fishing spot, they are shocked to find the body of a young Aborigine woman floating face down in the lake. Instead of doing the right thing, though, they delay reporting their discovery to the police in favor of continuing their trip. The decision will reverberate with their family, friends and neighbors in “Jindabyne.”

Jindabyne” starts on a sinister note as a young woman drives down a deserted country road in New Zealand. A stranger drives up behind her and forces her car to the side of the road. Flash to Stewart (Gabriel Byrne) and Claire (Laura Linney) as they ground their son, Tom (Sean Rees-Wemyss), for killing a small animal with his best friend, Caylin (Eva Lazzaro). But, Stewart is more concerned with his long-planned fishing trip with his mates, Carl (John Howard), Rocco (Stelios Yakmis) and Billy (Simon Stone). However, the trip looks to be ruined when the quartet find the body of a murdered Aborigine woman. Decisions made after this discover will have a detrimental ripple affect for the men and those around them. Director Ray Lawrence takes the adapted screenplay (by Beatrix Christian) of a Raymond Carver short story and, at a languid but not boring pace, unfolds a drama that hinges on a bad decision. The anglers’ callous act – satisfying their own fishing needs to the detriment of the dignity of the slain young woman – will affect them all as charges of racism rain down upon them from the native Aborigine community. The families of these men are pronounced guilty by association by their neighbors and Claire, in particular, must suffer their scorn because of Stewart et al’s thoughtless actions. Byrne and Linney head the large cast of New Zealand actors and these two veterans help to anchor the film. Laura Linney gives a powerful character study of a woman whose life is put in turmoil by her husband’s actions. The actress has proved to be a reliable addition to the films she appears in, whether they be comedy or, as here, family drama. Gabriel Byrne is more two-dimensional as Stewart, the object of the town’s new scorn. The rest of the cast flesh out their roles, giving “Jindabyne” a realistic feel that should make it appealing to its targeted international audience. The issues raised in “Jindabyne” – race hatred and prejudice and opposing those antisocial acts – resonate on a world level. Helmer Lawrence and all do not preach their feelings, though. Instead, they lay out their story thoughtfully and let the viewer decide what is right and wrong.