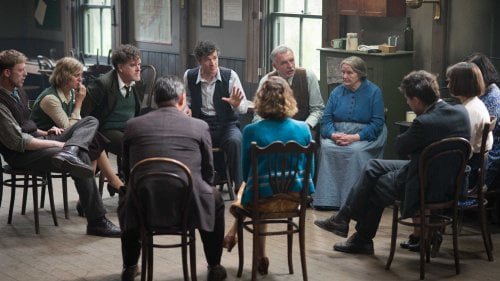 1932, the Irish Republic. Jimmy Gralton (Barry Ward) returns home after a 10-year political exile in America. He returns to his small home town in County Leitrum with the intent of having a quiet life caring for his aging mother Alice (Aileen Henry). But the townsfolk, remembering Jimmy’s earlier dance hall that got him deported, beg him to bring the hall back but the “masters and pastors” are adamantly against “Jimmy’s Hall.”

In 1932, ten year's after Ireland's Civil War, Jimmy Gralton (Barry Ward, "The Claim") returns home to County Leitrim from America. He was rousted out of his homeland by priests and politicians who didn't like his socialist messages and they're all focused on him again, especially when the area's youth convince him to reopen "Jimmy's Hall." This true story about Jimmy Gralton and The Pearse-Connolly Hall adapted by Paul Laverty ("The Wind That Shakes the Barley") from Donal O'Kelly's play just might be director Ken Loach's ("Kes," "The Wind That Shakes the Barley") last film. It may not be one of his very best, the film's repressed protagonists whitewashed of any vice, but Ward is a sympathetic and charismatic lead and the film serves as a reminder of the stranglehold the Catholic Church had on the Irish populace. The rich's exploitation of the poor and the eternally unlearned lesson that repression breeds rebellion are also strong themes here. No sooner is Jimmy home than Father Sheridan (Jim Norton, "Water for Elephants") comes sniffing around, questioning the aged mother, Alice (Aileen Henry), Jimmy came home to care for. At first, Gralton keeps a low profile, but the demand for a place for the local kids to go is too strong and so, with help from friends, Jimmy refurbishes his old tin roof hall. Soon there are classes in literature, boxing, singing and dancing, Jimmy himself taking the lead on the later with his gramophone and scandalous jazz moves from NYC. When a big dance is held one Saturday night, Sheridan admonishes his flock from the road, later calling each and every one out during his sermon. The Catholic Church, you see, should be Ireland's only educator. Loach makes an awkward time transition to show how Jimmy asked his love Oonagh (Simone Kirby, "Season of the Witch") to leave with him 10 years prior. She was heartbroken but, as an only daughter, saddled with parental care. On his return she's married with two kids but the flame between her and Jimmy has never been extinguished. They share a dance, but the farthest their physical expression goes is a clench. One also never witnesses alcohol consumption in the hall where dancing is apparently the devil's biggest lure. When a local farmer and his family is thrown from their modest house by the area's largest landowner, the IRA asks Jimmy to step in and address the crowd. The family is restored to their home, but Jimmy's days are numbered. Alice even shores up her courage to speak in his defense in a Dublin court, but her son becomes the only Irishman ever to be deported from his own country. Ward is thoroughly engaging as the impassioned pacificist and the strong bond between him and Kirby is palpable (the actor who plays her husband is mere background and we never know how he feels about the obvious attachment). Norton is strong as the hissable priest who wavers when challenged by Jimmy's clear logic. He's nicely counterbalanced by Andrew Scott ("Pride") as the younger, more progressive Father Seamus. Aisling Franciosi (TV's 'The Fall') provides the face of the teenagers as Marie, the daughter of sworn Gralton enemy Commander O'Keefe (Brían F. O'Byrne, "Queen and Country") who gets beaten for dancing in his hall. Grade:

This is, according to long time veteran filmmaker Ken Loach, his last film. If that is true, then he goes out with a solid social commentary about a man who just wants to bring fun and education back to his home town. Jimmy is a local hero, a man who sought his fortune across the Pond, and his return home brings hope to the people of the town who have been kept down by the local head of the church, Father Sheridan (Jim Norton). The priest and the lords controlling the land know that the hall will be a hotbed of socialism with its dancing and learning – Jimmy’s hall is a Mecca for freethinkers in a land of totalitarianism control by the church and state. “Jimmy’s Hall” is about the battle of wills, and laws that will take hold of the town. It is a fight between the modern thinkers of good sense versus the arcane thinkers who do not want to listen about change. As such, Loach’s latest (and hopefully not last) is a progressive new millennial look at a past time. One interesting thing, though: there is not an ounce of alcohol consumed by anybody in the town during the entire film – except for the priests and the lords.