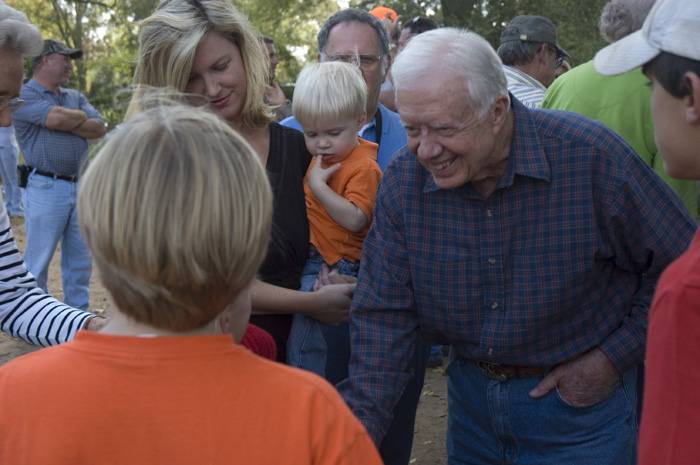 In October of 2006, former president Jimmy Carter went on a whirlwind tour across the US to promote his controversial book, Palestine: Peace Not Apartied. The controversy lay in the perception of his critics that our 39th president’s book, (the man brokered the Middle East peace accord between Israel and Egypt) is anti-Israeli, even anti-Semitic. Filmmaker Jonathan Demme followed the man on his tour and gives him his say to his critics in “Jimmy Carter Man from Plains.”

The most impressive thing about “Man from Plains” is the youthful energy the 83 year old Carter displays in his quest to tell the American public of the apartied-like way that Israel has built a 40-foot high around the entire West Bank. A wall to protect the Israeli citizens for terrorists operating out of the area seized by Israel in the 1967 Six-Day War is one thing, but a wall that intrudes into the Palestinian land, occupying choice real estate in the process, is another. Jimmy Carters book sparked both praise and criticism across the country and the world. Helmer Demme’s ever-present cameras accompany Carter from one city to another, from one television interview to another. The former president begins his book thumping in New York City on the Charlie Rose TV show. He continues his string of interviews across the land with, among others, Larry King Live, the Diane Rehm show, Wolf Blitzer’s The Situation Room, Judy Woodruff on the Jim Lerher News Hour, the Al Franken Show, the Steve Cochran Show and The Tonight Show with Jay Leno. The interviewers ask tough questions but octogenarian Carter is well-prepared and articulate with his answers. Jimmy Carter may have been president once, but what he really is, is a down-to-earth man of the people.who feels so strongly about the Israeli-Palestinian crisis that has been going on for decades. According to Carter, the only way peace can come to that troubled region is if Israel returned the lands it seized 40 years ago. This stance resulted in criticism from many fronts and Carter stood up to the onslaught, including pro-Israel demonstrations, and never loses his cool. Carter’s never-ending vigor is shown as he stumps from one airport to another, pulling his own luggage behind him. He is willing to discuss his book with anyone and everyone and takes his book tour seriously. Jonathan Demme and his crew exhibit the same level of energy as they follow him across the country. It is solid documentary filmmaking that is well-paced and interesting all through the two-hour run time. Like him or not, Jimmy Carter is a man committed to his cause and, whether you believe him or not, he shows honest integrity and ability to speak fluently on his subject. He makes a case comparing the current situation in Israel with the white-ruled apartied of South Africa before Nelson Mandela and is more than willing to face his detractors. Whichever side of the controversy you may be on, Jimmy Carter Man from Plains” makes its case and, if you really think you are open minded, you will give this well-made docu a chance. It even makes me want to read the book that sparked the brouhaha.