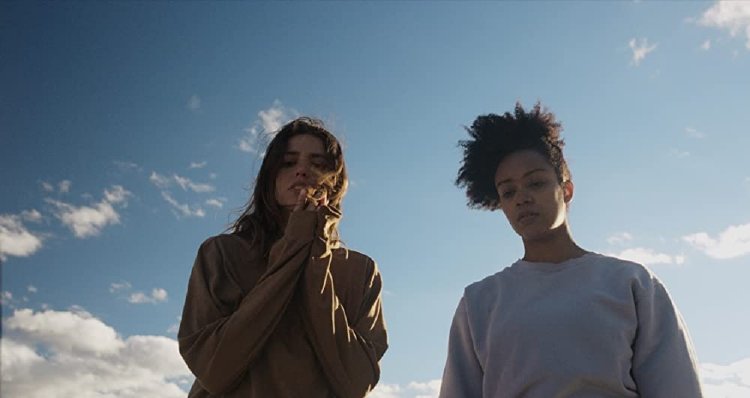 After telling a one night stand she had hidden out in her grandmother’s trailer for a year because she killed someone, Elena (Callie Hernandez) flashes back to the day she was gassing up her car and suddenly saw an old friend in that unlikely place.  After convincing her to follow her to her remote New Mexico trailer for a cup of coffee, she listens to her friend’s worrisome tale and offers her spare bedroom to “Jethica.”

Cowriter/director/cinematographer/editor Pete Ohs found a trailer he could afford on Airbnb, had his cast watch “Blood Simple” as a kicking off point, then took them to New Mexico where they wrote their script as they went along.  What they’ve come up with feels thoroughly fresh despite obvious influences, an endearing tale of manifestations of guilt by way of a lingering Santerian spell.

This film isn’t as interested in building a mystery as establishing a quirky tone.  We’re tipped off early that something’s up with both of these women, having observed Elena driving along a rural road where she picks up a friend, Benny (Andy Faulkner), whose pallor, sunken eyes and zombie-like demeanor suggests he may, in fact, be dead.  Later, as Jessica (Ashley Denise Robinson) follows her back to her trailer, we’ll see her hang not one, but three of those pine tree air fresheners probably purchased back at that gas station over her rear view mirror.

Once settled, Jessica will note the Santerian altar Elena attributes to her grandmother before confiding that she’s on the road because of a persistent stalker.  Elena is shocked, then suggests a trip out to ‘the ruins,’ the source of a relic Jessica had asked about.  But the girls are no sooner wandering around the crumbling stones when Jessica sees a man lurching in the distance, one who she claims looks just like Kevin (Will Madden, "The Wolf of Snow Hollow"), the man she’s on the run from.  Back at the homestead, as Jessica takes a bath, Elena will see what appears to be that same man outside, frantically calling out for her friend, a slight lisp contorting her name into ‘Jethica.’  But after reluctantly climbing out of her bath, Jessica looks out the window and says the man can’t possibly be Kevin…

If you are extremely spoiler averse, skip this paragraph, but it is all too easy to figure out just why Jessica resists identifying this man as her stalker.  Apparently Elena’s grandmother had once cast a spell welcoming spirits onto her land, and so Kevin has appeared, his declarations of undying love and devotion becoming a persistent background noise that is at once sympathetic and annoying.  Elena informs Jessica there are only three ways to get rid of a ghost – 1) it goes away on its own (unlikely); 2) you get another ghost to kill the ghost or 3) you give the ghost what it wants.

Hernandez and Robinson shoulder the bulk of the film, the actresses carving out contrasting personalities that are just right, Elena confident and unruffled, Jessica more fearful and withholding.  Hernandez has the showier role, going out to convince Kevin that he no longer ‘is,’ but one wonders why she was chosen for the film’s framing device when it is Jessica who should be warier of romantic entanglements.  There is an imbalance in the film’s two main ghosts as well, Madden’s delivery (and makeup – the actors applied their own) not as convincingly ‘dead’ as Faulkner’s, although he must be commended for his fluidly unspooling monologues.

Ohs makes great use of the flat New Mexico landscape, frequently centering characters in close-up against dramatic big sky backgrounds (one shot features Kevin weaving through farm machinery).  John Bowers’ spare score begins with a single piano key establishing a beat, passing it onto a bass guitar before weaving instruments together.  But the best thing Ohs and his cast have accomplished is never undermining the seriousness of stalking while achieving a gently comedic tone before wrapping with a feel good ending you may not see coming.  “Jethica” is a delightful little indie gem, the creative talent on display marking several contributors as ones to watch.