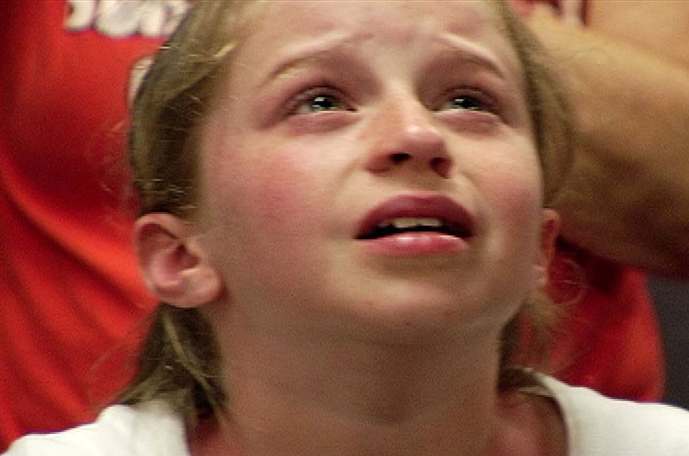 In Hillside, Illinois, radio DJ Mike Papantonio warns his listeners about the political implications of the swelling ranks and activities of the Evangelicals. "Boys of Baraka" filmmakers Heidi Ewing and Rachel Grady give us unblinkered access to how the children of born again Christians are being taught and molded by media savvy Church leaders like Reverend Becky fisher at "Jesus Camp."

Ewing and Grady have accomplished something of a miracle with "Jesus Camp" - they have made a documentary that is at once explosive and unbiased. Born again Christians will likely view their own with pride while the rest of us can be terrified at what this powerful movement may be capable of. The filmmakers have incredible access to their subjects and have made a visually dynamic and thoroughly engrossing film. The first image of the Evangelicals we're presented with is of the kids performing a warlike stick routine to Christian rock. With their camouflaged face paint and intent expressions these young kids look like nothing less than a rising storm of religious extremists. 'Kids' pastor Becky Fisher calls for kids and parents alike to 'get your tools and fix this nasty world,' then proceeds to tell the filmmakers how usable children are, pointing out that 'our enemies' have been quite successful in doing so. We get the stats - 43% of Evangelists are 'born again' before the age of 13 and there are 80 million in the U.S. 75% of home schooled children are Evangelists and Ewing and Grady's access brings us into a home where a mother (a picture of absent dad, a U.S. soldier, hangs on the wall) teaches her children that creationism is the only possible answer and that global warming is a political hot topic but is of no concern - can a .6 degree temperature raise possibly cause us any harm? Three children are profiled as well. There is Rachel, a Jesus Geek unparalleled who inured to the taunts of other children and who evangelizes in a bowling alley. Levi, adorned with mullet-queue, informs us that 'America's supposed to be God's Nation' as he poses with a cardboard cutout of George W. (Hugo Chavez would strongly disagree). Tory vibrates, speaking in tongues, and berates herself for occasionally feeling the flesh when she dances to Christian heavy metal. When they all come together at Jesus Camp, they're told that Harry Potter should be put to death by Becky Fisher, a woman who knows how to put on a show and who exorcizes evil spirits beforehand by blessing everything from the electricity to her PowerPoint presentation. Do none of them realize the irony of their camp's location? Devil's Lake, North Dakota.