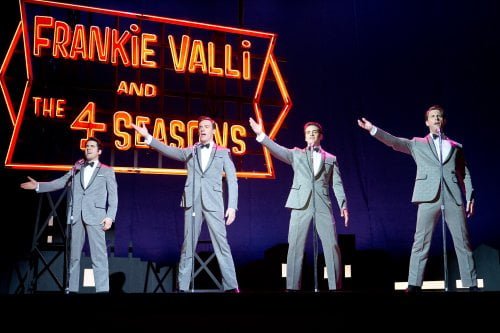 The Four Seasons, distinguished by lead singer Frankie Valli's (Tony winner John Lloyd Young) pure falsetto, were one of the biggest pop bands of the 1960's. But few know about their decade long struggle to make it big while pulling off petty crimes and skirting the local mob as "Jersey Boys."

In adapting the Broadway musical to film (Screenplay by Marshall Brickman and Rick Elise), director Clint Eastwood uses the old neighborhood brotherhood as his base note, layering in the conflicts among the original four members with the play's pass-the-baton, Rashomon-like, direct address device. The music (Eastwood chose to go with "Les Miserables'" live singing approach) and characterizations are terrific, but the film is a bit insular, never providing an outside perspective on period events or quite nailing the stature of the group in the zeitgeist at various points in time. The production also feels set bound, using few exterior locations (and one obvious rear screen projection). There may be a few off notes, but on the whole Eastwood's movie is an enjoyable, often humorous, informative band biopic, its four leads creating distinctive characters. To the instrumental strains of 'Oh, What a Night,' we enter Belleville, NJ in 1951 with Tommy DeVito (Vincent Piazza, 'Boardwalk Empire's' Lucky Luciano) informing us he's the only one who can tell us the real story. He's the driver for local mobster 'Gyp' DeCarlo (Christopher Walken, more paternal than threatening), but leads the Variatones trio at night when he's not orchestrating product falling off of trucks. Nick Massi (Michael Lomenda, reprising his role from the touring company) is his bassist and 16 year-old Frankie is his green mascot, occasionally invited to take the stage and sing the last song. Frankie's rendition of 'My Mother's Eyes' can bring Gyp to tears, earning him a favored status which Tommy resents, but when the guys are busted in an amusing heist gone wrong, Tommy protects him and gets a six month prison term. (Cops and judge alike are prone to ask Frankie if he isn't supposed to be home by 11, a joke which relates both the kid's lesser experience and the tight knittedness of the community.) We learn that the actor Joey Pesci (Joey Russo, playing at caricature) was not only part of their hood, but the guy who brings the writer of ‘Who Wears Short Shorts,' Bob Gaudio (Erich Bergen, reprising his role from the touring company), to Tommy's attention. Bob's business acumen immediately threatens Tommy's position, but Frankie says he'll quite if Bob isn't brought on board. Now dubbed The Four Lovers, the guys try to acquire a contract (Eastwood stages a floor-by-floor examination of the Brill Building) and meet producer Bob Crewe (Mike Doyle, TV's 'Law & Order: SVU'), who agrees to take them on. After a year of doing nothing but backing vocals, the guys buckle down to find their sound and 'Sherry' is born, Crewe having the brilliant idea of doubling Frankie's vocal track. With a new name inspired by the neon outside a bowling alley ('It's a sign!'), they take off like a rocket ship, but Tommy's inability to play with the big boys and predilection for gambling will grow into a major speed bump down the road. Frankie is the only member of the group whose home life is given any shrift. He's schooled by Tommy in the differences between Type A and Type B women (the former will sleep with you before busting your balls while the latter needs to be wined and dined first) and told that Mary Delgado (the Broadway production's Renée Marino) is a too-hot-to-handle A, but Frankie's not deterred. Mary's the one who changes his stage name from Vally to Valli and soon they're settled down, raising kids in a two family. But the road takes its toll and Mary turns to alcohol while Frankie turns to journalist Lorraine (Erica Piccininni), furious when Tommy makes a move on her. Bob loses his virginity on the road compliments of Tommy, but he also makes a 'Jersey contract' with Frankie that excludes the other two. After Tommy's called in for $150K in debt by Norm Waxman (Donnie Kehr) right before an Ed Sullivan appearance, Nicky steps in to tell us that their real problems began two years earlier when the group learned Tommy'd skipped out on a Holiday Inn bill, netting the foursome a weekend in the clink. When Frankie cashes in Gyp's claim check to help out Tommy, they discover he's put them in a deeper financial hole than they'd imagined and the original band disintegrates, Nicky quitting in a tirade over the hardships he's endured rooming with Tommy throughout the years. The last part of the film, which charts Valli's climb back, loses some steam. There's no context of the musical climate he's struggling against and his lessened circumstances while paying back Tommy's debts don't seem all that different from his heyday. The death of his daughter Francine (Freya Tingley) at 17 is used to show the fickleness of Lady Luck and as a vehicle for 'My Eyes Adored You.' But the film gains momentum when Bob makes good on an old desire of Frankie's to add a horn section, shifting gears with a new song ('Can Take My Eyes Off of You') that becomes a hit. The film wraps with the band's reunion after twenty years for their Rock and Roll Hall of Fame induction and rolls out with a spirited musical curtain call (keep an eye out for Walken's soft shoe shuffle). The most modern thing about Eastwood's film is its narrative device, but otherwise the film's pretty old-fashioned. Cinematographer Tom Stern's ("Changeling") framing is often questionable, going in too often for the close up, his camera cutting off too much performance space. Production Design by James J. Murakami ("Changeling") favors burgundies and browns (except in Crewe's Liberaci-like environs). Set decoration offers the occasional chuckle (Frankie's childhood home's kitchen is adorned with a clock prominently featuring the Pope and Frank Sinatra). Aging makeup used for the 1990 scene isn't convincing in the least. Eastwood notes his own age in an early scene where 'Rawhide' can be seen on TV. Grade: