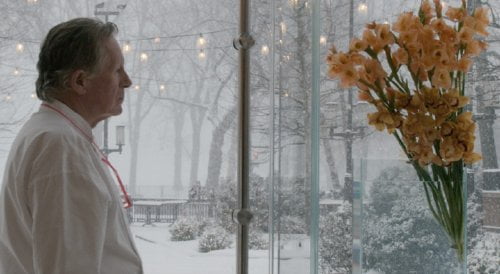 Jeremiah Tower was the greatest chef that we never knew. He made his first claim to fame in the culinary world as the innovative restaurateur at Chez Panisse in San Francisco in 1972. He moved on, some years later, as the owner and chef of the famous Bay-area Stars restaurant in the 1980s. Then, he dropped out of both the food and social world only he re-emerged, decades later, as the head chef at New York’s famous Tavern on the Green. He is “Jeremiah Tower: The Last Magnificent.”

Jeremiah Tower proves a fascinating subject, especially his bizarre Eloise-like childhood. But while Lydia Tenaglia lays this and his years at Chez Panisse, where he revolutionized the American culinary scene, out well, his downfall is more haphazardly told, leaving one too many questions at the documentary's close. Still Bourdain is to be applauded for putting a spotlight on the controversial chef whose name had all but disappeared from discussions of our culinary history. Grade:

If you are interested in the life and culinary career of Jeremiah Tower, or, if you are Food Channel junkie and like movies about food, then you might enjoy “The Last Magnificent.” Director Lydia Tenaglia and producer Anthony Bourdain bring the life’s story of the man who was once an innovator of cuisine and considered the greatest chef in America. Tower narrates his life’s story starting when just a lad, pampered but left alone much of the time by his less than doting parents – his father a businessman and philanderer and his mother an alcoholic. Because of her, though, he developed his love of food at an early age. At first, “Jeremiah Tower” follows his life in chronological order: growing up, ambling from one expensive school to another with never a worry, until the money stopped. From here, the filmmakers are much looser with chronology, jumping back and forth from his days at Chez Panisse and Stars and emergence, after years of self imposed exile from the business, as the head chef at New York’s problematic “Tavern on the Green.” Tower’s life and career is laid out, with his controversies, successes and failings. But, I felt that the reason for his falling off the earth for so many years only to take on the daunting and exhausting role as the culinary boss at the Tavern were self imposed and often because of his ego. As such, I felt little sympathy for the man and watched the film academically. It should have elicited more from me. Still, it is an interesting look into the world of a man of who I knew little if nothing about.