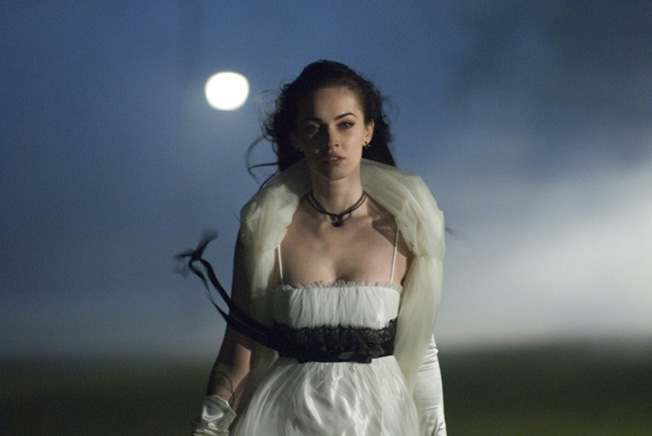 Knowingly gorgeous, stuck-up and attitudinous Jennifer (Megan Fox, "Transformers") has all the boys thinking 'babelicious,' but after she undergoes a change after spending time with a fledgling rock band, all male high school students would be much better off thinking about anything other than "Jennifer's Body."

Hyped to the max, “Jennifer’s Body” had the potential to bring some real girl power to the horror genre as the follow up to Oscar winning screenwriter Diablo Cody’s “Juno,” directed by Karen Kusama who gave us the fierce indie “Girlfight” and starring “Transformer’s” car-jock Megan Fox in a role she might be able to actually emote in. But while the film has plenty of fang and gore, it’s a major disappointment across the board. Cody, whose arch, snarky pop culture dialogue turned me off of “Juno,” doesn’t even bother to come up with much of an original story here and Jennifer’s pat put downs are more ugly than amusing. Even worse, she uses Rhode Island’s Station nightclub tragedy as her template to get the action going, a bit of exploitation that’s even uglier. About the only thing that works is her amusing observations on the music industry. Kusama does a competent job and gets some decent performances, but she fails to jolt the material into scare territory. Fox, who’s been getting bashed on the ‘net in her testy feud with Michael Bay, comes across as the self-absorbed selfish bitch she’s being portrayed as in real life, yet her Jennifer isn’t juicily evil, just mean-spirited. The film is told from the perspective of Jennifer’s BFF, Anita nicknamed ‘Needy’ (Amanda Seyfried, HBO’s “Big Love,” “Mamma Mia!”) who tells us ‘Hell is a teenage girl’ from the confines of a cell. Flash back and we witness Needy (presumably geeky because she wears glasses and no makeup) in thrall of her friendship with Jennifer. There’s a hint of lesbian longing in the air, but Needy has a cute and sweet boyfriend, Chip (“Hotel for Dogs’s” Johnny Simmons, graduating from kibble to condoms here). But Jennifer takes precedence and so when she decides they should head out to a rank club on the outskirts of town because a visiting band’s lead singer is ‘extra salty,’ Needy acquiesces. That band, Low Shoulder, is looking to hit the big time and lead Nikolai (Adam Brody, “Thank You for Smoking”) thinks there are only three ways to do so – get on Letterman, get on an indie movie soundtrack or Satan. Guess which option he’s decided on? They need a virgin to sacrifice and Jennifer advertises herself as one to get what she wants. The only problem – sacrificing a non-virgin to Satan creates some serious problems and Needy’s the first to see just what has happened to Jennifer. Jennifer then proceeds to chow down on jocks and Goths as Needy frets and figures out how to take her down. The cynicism on parade with Low Shoulder, who cause the club they play in to burn down with most of their audience still inside then take credit as having rescued many who made it out, is kind of fun, as is their subsequent road to fame, but everything else is mighty rote. The only likable characters are either killed or left holding the sequel bag, akin to being left standing in a game of musical chairs. Cody brings a few parents into the story, most notably Needy’s mom (“Strangers with Candy’s” Amy Sedaris) who warns ‘one day you’ll cry for your momma and she won’t be there,’ but she provides no real subtext. The great character actor J.K. Simmons (“Juno”) has never been so ill used as he is here, a teacher who seems to have wandered in from Bobcat Goldwaithe’s “World’s Greatest Dad.” “The Haunting in Connecticut’s” Kyle Gallner shows promise, as he did there, as one of Jennifer’s victims. Closing credits feature an epilogue that tries to be edgy but merely feels like a setup for more of the same.