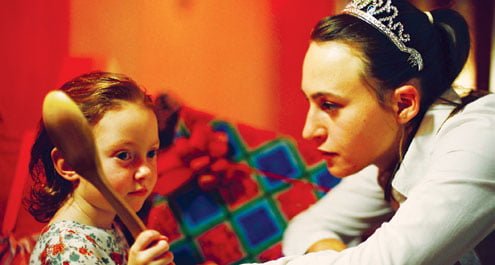 The lives of three women living in Tel Aviv cross paths in the freshman debut by Israeli filmmakers Shira Geffen and Etgar Keret. Batya (Sarah Adler) is not very good at her job as a waitress at catered affairs. Keren (Noa Knoller) is the beautiful bride at one such affair who breaks her leg on her wedding day. Joy (Ma-nenita De Latorre) is a Filipino elder caregiver who is also at the wedding. The seaside city is the backdrop as we follow the lives of these three in “Jellyfish.”

This is definitely a chick flick – that is, a movie that will appeal to women rather than guys - with its concentration on and development of the three main characters. Men are superfluous, at best, with only a couple of the males given anything, if just a little, to do. Of the three main characters, Batya receives the lion’s share of the story when she finds a strange little waif wandering the beach. The mute little girl is clad in just a pair of panties and has a float ring around her waste. Batya first takes her to the police, who are not able to contact child services, and the young woman decides to take the girl home for the weekend. I am not sure what the presence of the silent child means but the images of Batya and the girl are thought provoking. Keren’s story takes a different tack after the bride breaks her leg and she and her new husband’s long set plans to honeymoon in the Caribbean are dashed. Instead of their idyllic plans, the couple is forced to settle for a far less glamorous stay at a seedy Tel Aviv beach resort where their room smells funny and doesn’t even have a view of the sea. Things are further complicated when Michael (Gera Sandler) forms a friendship with a beautiful authoress who is staying, alone, in the hotel’s only suite. This friendship sparks a bout of jealousy in Keren’s troubled mind. Joy’s story made me scratch my head. Why would a Filipino woman travel half way around the world, and far, far away from her beloved five-year old son, to work in a country where she doesn’t speak the language and her elderly wards treat her with disdain. Can the money be that good? Her relationship with an irascible old German woman she is hired to care for has a nice arc as the two women bond. A bit heavy handed but well done. The script, by co-director Shira Geffen, is an intricate weaving of the separate lives of its three principles. Their story is told with an intelligent understanding of the characters.